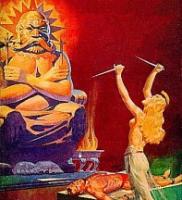 It has been a question for a while what those of us interested in peak oil and how the world might be beyond it should refer to ourselves as. Albert Bates of The Farm in the US coined the term ‘postpetroleumologists’. The PowerSwitch folks in London favour the term ‘peakniks’. I’m sure there are others, but now finally, the ideal term has been suggested. We are all, apparently, **catastrophist apocalyptic cultists** (kinda trips off the tongue doesn’t it?). That’s that cleared up then. A recent article by Vaclav Smil, a professor at the University of Manitoba in Winnipeg entitled Peak Oil – a Catastrophist Cult and Complex Realities, accuses Peak Oilers of ‘deliberately alarmist arguments’ and of writing the obituaries of Western civilisation too soon.

Most of his arguments are the usual tired old tosh dished up by flat earth economists the world over to criticise peak oil. You know the kind of stuff, as oil becomes more expensive, the market will be spurred into action and will somehow magically come up with a new energy source as versatile as oil (an argument the Hirsch report kicks ably into the long grass), and that we’ve heard all this resource depletion stuff before, people have been predicting peak for centuries (surely as more information becomes available it means that we are able to make more precise predictions…) .

His argument about the market driving solutions seems very naive to me. He argues that the 1970s oil crisis made US cars more efficient, but surely that was more than offset by the amount of new cars on the road? It is a question of overall efficiency, not just that of individual appliances. He argues that if cars could achieve efficiencies of over 50 mpg the price of motor fuel would go “into a tailspin”. While this may be true, it is hardly the cure for all our ills. If petrol cost half the price, would you use more of it or less? Most savings in efficiency and conservation tend to be gobbled up by increased consumption. As Robert Hirsch points out in his interview on Global Public Media, conservation is only one very small part of what will be needed to be done. Paul Mobbs has written in ‘Energy Beyond Oil’, “energy efficiency is meaningless in the face of actual energy shortages. You can only reduce energy if you have the energy to use in the first place”.

Smil points out that oil extracted from tar sands and the like are becoming cheaper, and that “boundaries between conventional and nonconventional reserves are dissolving”, but then few people in the peak oil movement would disagree with that. The point is not that we are running out of oil, but, as Colin Campbell has said repeatedly, that we are running out of **cheap** oil. Yes oil can be extracted from tar sands, but it will be increasingly more expensive, with knock on effects for the whole economy. He offers us the certainty that “major discoveries await”, without saying where they might be, that is after all what they said about the Caspian, which turned out to be a huge disappointment.

He assumes that the most prominent peakers, Campbell, Lahererre and so on, are alarmist, and somehow have a vested interest in writing their “obituaries of modern civilisation”. It is worth remembering that most of these people have long backgrounds in the oil industry and hold it very dear. Colin Campbell’s ‘Oil Crisis’ book sets out very clearly the affection with which he holds his time in the industry. These people are whistleblowers, not social delinquents.

The Free Market News Network (‘driven by truth’ apparently) published Smil’s article, along with their own views as to why Smil was right, but fortunately good sense came to the rescue and their site has had many far more reasonable postings from people pulling them up on their simplistic view of peak oil. You can follow the debates on their site here. It is good to see that there are people out there who are bringing them to task.

Smil is not entirely wrong though. One of the insights I got from this piece is that we in the peak oil movement have become more associated with the problem than the solution. At the End of Oil conference in London in October, I was struck by how the event was geared towards convincing us that there is a problem when actually most people there had moved beyond that and were looking for solutions (the Kinsale approach was creating a lot of interest). 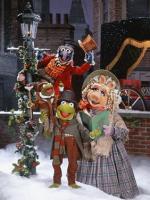 This Christmas I had the dubious privilege of watching the Muppet Christmas Movie, awash with saccarine sweet sentiments about the true meaning of the festive season. Based as it is (for those of you who have not had the pleasure) on Dickens’ A Christmas Carol, it featured the Ghost of Christmas Future, who shows Scrooge his grave, unloved in a lonely graveyard, which will be his future unless he changes his miserly ways. It struck me that in effect what much of the more alarmist element of the peak oil movement does is like the Ghost of Christmas Future, showing how things will be unless we change our ways. The problem comes when we become seen as a movement which just says “ah but no because you see…” whenever anyone offers any suggestions as to what we can do about impending oil peak.

It is not really fair to raise a problem without also offering something that can be done about it. It is great to see that within the peak oil movement there is a growing search for solutions, seeing it, as has been argued for and discussed here at **Transition Culture** since our inception at the beginning of November (is that all?) as the great opportunity to articulate and implement the post carbon future we all seek. The converging of peak oil and permaculture called for by, among others, David Holmgren is, for me, particularly exciting.

Smil accuses the peak oil movement of “presuppos(ing) the end of human inventiveness and adaptability”, which doesn’t sound like most people I have met. To say that oil peak will mean that we need to profoundly redesign our settlements and our economy and relocalise how we do most things does not appear to me to deny human inventiveness and adaptability, rather to dedicate oneself to empowering and unleashing those things. Despite his setting out to ‘dismantle the foundations’ of the peak oil argument, in his closing paragraph he actually comes pretty close to saying what many of us in the peak oil movement are saying.

>”Energy transitions … necessitate the scrapping or reorganising of extensive infrastructures, are costly and protracted and cause major socioeconomic dislocations. But they have created more productive and richer economies,and modern societies will not collapse just because we face yet another of these grand transformations. Unless we believe, preposterously, that human inventiveness and adaptability will cease the year the world reaches the peak annual output of conventional crude oil, we should see that milestone (whenever it comes) as a challenging opportunity rather than as a reason for cult-like worries and paralysing concerns”.

I don’t share his optimism that we will produce a richer economy, at least not in purely economic terms. I also don’t share his optimism that we will find another energy source as versatile as oil. What I do read in the above though is his seeing the peak as bringing in major changes, the redesigning of our energy systems, and a major undertaking to rethink every aspect of our lives, which, once completed could place us in a more abundant and satisfying place than the present. In that sense, despite his earlier deluded rantings, I found, despite my being a catastrophist apocalyptic cultist, that I had a lot in common with Smil. He reminds me a bit of a drunk guy you meet in the street who rants and roars at you but by the end of the night has his arm round your shoulder and is telling you you’re his best pal. Perhaps if those of us who promote the peak oil argument did more to put forward and popularise solutions and a positive vision of the future; we might actually find more common ground with people like Smil than he, or we, may be aware of.

**Postscript.** Further exploration of the FMNN site confirms my suspicions that the site is home to opinions of a most extremely odd nature. Take this for instance, *”…Wall Street business interests that had a hand in funding the environmental movement. We’re still supposed to think that it is a genuine grass-roots phenomenon instead of a cover to allow the oil industry to artificially constrict petrochemical supplies and reserves”*. I love this argument that those of us advocating peak oil are paid by big business to do so, having been involved in environmental things for years, I can quite honestly say that most of the groups and projects I have ever been involved in functioned on almost no money at all, and lurched from crisis to crisis, and would have been deeply grateful for a huge cash injection from Wall Street! This is such utterly absurd tosh that it really doesn’t even deserve comment, but it does help to highlight was tosh mongerers FMNN would appear to be.

**There is also an interesting review of Smil’s piece at EV World, with some insightful comments, and you can also read Colin Campbell’s brief comments on it here.**

Great stuff Rob, very well written and argued. I totally agree with your vision of the future and agree about the importance of winning the hearts and minds of people and not scaring them. But I think we have to do more than just win hearts and minds…

A creative localisation would be the first time in human history that we as a species have not fought each other for resources. I see it as inevitable that the rich countries will wage large-scale wars for control of dwindling resources. I think we should acknowledge this and prepare people for it. It shouldn’t come as too much of a shock to people in the UK as their government has been doing this for hundreds of years (see George Monbiot’s recent article on holocausts). We also need to acknowledge that over the next 200 years we must be aiming for the human population to be reduced. We are a plague species. As ‘peakniks’ we should be arguing for this to be done voluntarily and creativley. If it’s not done voluntarily natural disasters, war and environmental stress will do it for us.

Thus I suggest that in addition to winning hearts and minds for creative descent we need to prepare for trauma and a way of dealing with the atrocities that are occurring around the world. Even though I am insulated from pain and suffering here in Ireland I often feel unmotivated to be creative under the weight of the knowledge that so many of my fellow human beings are needlessly hungry, ill, homeless, or being tortured. A way of dealing with this despair at our species would help. Perhaps I need a religion?

Just another example of what scary times we live in. Corrupt leadership, Natural or man made disasters,food & resource shortage or monetary collaspe something big is going to happen. I am making preperations now. This site is loaded with tips on surviving anything….http://www.disastersurvivalist.com