The Lessons from Kinsale – Part Five

**Lesson 5. What Could Have Been Done Better…** 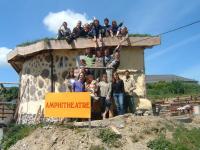 This is not really something I should be writing really, this is more something that the people who have taken the **Kinsale Energy Descent Action Plan** (KEDAP) on or the residents of Kinsale should be writing, but I will give some thoughts that I have had on the subject. As previous posts have set out, the KEDAP arose from a programme of community brainstorming, awareness raising, the work of the students and the inputs of various people in the area with ideas to offer. It has gone on to end up being approved by the Town Council, and is leading to some interesting developments. But if we had our time over, what might we have done differently?

Firstly, the process was not really as **embedded in the community** as it could have been. It was principally my initiative and concept (with the support and inspiration of an assortment of others), and despite many of the students having been involved, when I left at the end of term due to changes in other areas of my life, I hadn’t left any obvious support structure in place to take on the process. The team who had driven it forward were mostly not from Kinsale, and there was no community group in place to carry it forward. Had it not been for Louise and Catherine (both former students) who formed Transition Design, and Graham Strouts, my replacement as course teacher, continuing to drive it along, it could have disappeared without trace. I guess that from this I learnt that it is important that the process is rooted in the community, although I can excuse it I think in the Kinsale case in that the Action Plan is, in effect, a suggestion for further action, and once finished was offered to the community to take and develop in whatever way they felt most appropriate. Basically the lesson here is that the process needs an inbuilt resilience, so that one person can drop out without affecting the project. 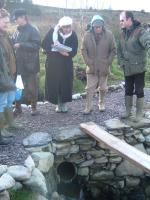 We didn’t do enough **awareness raising**. What would have been ideal would have been at an early stage to have trained students up to run peak oil awareness workshops in schools, youth clubs, gardening clubs, to anyone who would listen basically. The reason in Kinsale we didn’t do this was constraints of time, to start with we didn’t know what the process we were developing was going to look like, and we still coming to grips even with what energy descent would mean to Kinsale ourselves (and still are!). Now in the process I am designing for Totnes, we are looking at an early stage to offer a 10 week training to equip people to be able to do this. This also grows out of the above, making the concept better embedded in the community. The problem with Kinsale was that I didn’t live there, so I didn’t know all the groups and networks, something that the training course would get round. The idea is for a 10 week course where each week would be 50% class time and 50% Open Space about what the material covered in the first half would mean to the town. This would also start to contribute to the Action Plan.

We didn’t do enough **background research**. There is a fine line with this. I have only seen a very very early draft of the Post Carbon Institute’s Relocalise Now! (due at the beginning of February from New Society, and what looks like it will be a crucially important book) but in that one of the steps they suggest is a community energy audit, or a community food assessment. It is important I think to question this, and say where does a small community group looking to develop Energy Descent plans start with doing such a thing? It would take qualified energy engineers a long time to do an Energy Audit for a town, where is a small group of committed amateurs to start? Louise at Transition Design, is trying to get funding for a company with expertise in renewables and energy to do an energy audit for the town, in such a way that the surveys and community ground work can be done by the citizens group. This is an expensive option though.

What is important I think is to have some kind of measures against which to assess the success of the projects. Some kind of baseline information is needed, to assess that the measures are bringing the town under the depletion curve recommended in the Oil Depletion Protocol. To be honest, despite doing the Kinsale Plan, I couldn’t tell you the population of Kinsale, how much it spends on energy and food every year, where its energy comes from, how many new houses are built there each year. That is pretty poor, and any Action Plan should pull all that information together in its first year. Maybe it needn’t do full assessments, but at least establishing some baseline figures which it can revisit each year to assess its success or otherwise is essential. Again, the only excuse for that I can offer is that the KEDAP was done in limited time and with limited resources.

Some of the areas we attempted to address we were **simply unequipped to do**. One group of students were asked to look at Marine Resources. If you look at the Plan (some people have asked me about this!) you will see that in the Contents page there is a reference to a chapter on Marine Resources, but this chapter doesn’t appear in the text. This is because the students really struggled to come up with something meaningful to contribute on the subject, and, despite their best effort, the end result was fairly poor. If I am honest, had I written it myself it would have been little better (it being an area little covered in permaculture). In the end, at the editor, I took the decision to leave it out (but neglected to update the contents page accordingly!). There is a danger with trying to tackle every aspect of the town’s life that we end up trying to offer intelligent advice on things we know nothing about. At the end of the day we can’t know everything, and it is an insult to offer poor suggestions, people see through them straight away and they devalue the other suggestions. If the process is better embedded in the community, it is more likely that people will get involved who know more about the subject in question. The use of Open Space events can help with this, as it will hopefully draw in the people who have information and ideas on these subjects to contribute, at this stage, putting together an Action Plan is more a process of facilitation and networking that of constantly coming up with great ideas.

I’m sure that others involved might have other insights, which would be good to hear. Although some of the above might be me being a bit too harsh on what was after all a student project being made up as it went along, I have tried to be honest and am thinking towards other people who also want to do similar projects, and what I might do better when I do it again. There may be other things come to mind that I will post later, but I hope that you have found these few points of use.

Thanks for your useful retrospective comments, Rob! I think given the groundbreaking nature of the work and the time and resources available to you the KEDAP will stand as a remarkable piece of work.
Ive recently moved to Kinsale and hope to be involved in a number of initiatives to implement some of the suggestions in the plan.
The first project is likely to be a Community Garden. Myself and Louise are meeting with Green Cllr Isabelle Sutton on Thursday to look at a possible site. Hopefully this will be suitable to set a s a design project for the students. Then we can later have a public event, display the designs, get input from the townspeople, go back to the council and say “Give us the Land!” It is really very exciting and as far as Energy Descent work is concerned Kinsale is one of THE places to be! We will of course kep you posted.

Helpful reflective comments Rob – that’s where your work to date comes in so useful. Covering ground, spotting the holes that need to be filled so that future Energy Descent work is more complete.