I was fascinated by the story that appeared in the Guardian the other day about Arthur Boyt, the man who has spent 30 years picking up animals that have been run over by cars and taking them home to eat them. Arthur lives in Cornwall, and over the years has tucked into badger, otter, rabbit, deer, weasel, hedgehog, swan, squirrel and fox. An article on the BBC website quotes him as saying “It’s not killing them for the sake of eating them. They have been accidentally killed… they are organic and in their natural wrappers.” He is presently writing his experiences up in his magnum opus, the Roadkill Cookbook.

As usual though, an awareness of peak oil throws a new angle onto things. It seems very likely, especially if the report by Foresight for the Office of Science and Technology that came out recently is to be believed, that in the near future, due to the rapidly rising price of oil, there will be less and less cars on the road. Indeed the report states;

>”an acute oil shortage and lack of affordable alternative energy source triggers a global depression. Economies collapse as businesses can no longer afford to move goods and people. People survive in increasingly isolated communities that have to learn to become self-sufficient, with most journeys made by bicycle or horse”.

Poor Mr Boyt. Not too many badgers to be scraped off the road after a few bicycles have been past. Not only will peak oil mean that the cars that mow down his lunches-to-be will not be around, but also he will no longer have the range he has now, being able to cruise around looking for his next meal, instead he will have to be content with what he can find within a cycle trip radius of his house, and that can be easily slain by a bicycle. I fear he may be reduced to stir fried flies that he can scrape off his cycling goggles and the odd slug. The post peak era will offer fairly lean pickings for our friend. 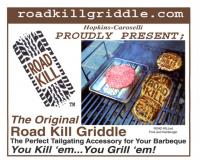 Of course, the Internet being a very odd place, once you start looking for roadkill on the Net some very peculiar things start coming up that your life was probably happier not knowing about. Such as Australians who eat run over snakes, recipes for cooking flat squirrels, and this is the oddest one, The Road Kill Griddle, made by Hopkins (no relation) and Caroselli , a home electric griddle that will make your burgers look like they have been run over by a car, with tyre marks and everything. We are a strange species.

The bit I liked most about Arthur Boyt’s story was the final paragraph, which said””I’ve lived off roadkill for the last 30 years or so. It adds to the pleasure of a meal to know I haven’t paid for it,” said Mr Boyt, whose wife Su is a vegetarian”. A vegetarian? Married to a man who you never know from one day to the next if he’s going to turn up at home with a stoat, an adult stag or a swan, and then set about dismembering it in the kitchen? Enough to turn anyone veggie…

Cousin Arthur, a remarkable fellow, might starve if he depends on bicycle road kill. He might have to ride a racing bike or hope all others will. He is right on the oil problem, we will have many problems to solve as we feel the pinch.