Reflections on EcoBuild at Earl’s Court 2.

EcoBuild is the biggest green building exhibition in the UK, and ran over 2 days, 22nd and 23rd February. I went up for the first day, to give a talk called ‘Designing for Transition’. The event was in a huge hall and was very well attended. There were hundreds of stalls, everything from Government Agencies to community development groups and from architects to solar energy companies. It was great to see that the mainstream is starting to take the concept of more sustainable building seriously, and that so many people from within the industry attended. It was heartening to observe the diversity of people who attended, and the degree to which people were aware of the need for changing current practices. There were some wonderful things, some of which I’ll touch on over the next few days, but in this post I want to touch on one of the things that struck me most, the prolific abuse, in my eyes, of the word sustainable.

I was deeply struck at what a pure focus on climate change permits, and how once you add peak oil to the equation, those things that appeared sustainable are no longer so. Here are a few examples that particularly struck me. Canada Wood, a company who argued that wood imported from Canada to the UK was an environmentally friendly sustainable option. All manner of horrible concrete stuff, from an insulated floor system with polystyrene blocks set in a concrete framework (see right)to a really crappy thing with these kind of precast concrete lego blocks which slot together to make retaining walls which allegedly resemble stone (below left).

There was a horrible log house system, with the most atrocious Disney style houses which would be totally out of place anywhere in the UK, infact anywhere apart from Disneyland (see below right). The logs all slotted together, but the rep said would need insulating on the inside anyway in order to make it sufficiently energy efficient. It seemed like a vastly inefficient use of wood to me. It could have been milled down smaller and used far more effectively. None of the wood was from the UK either. 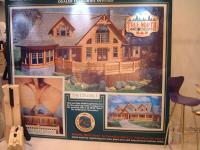 There were so many things presenting themselves as ‘green’ or ‘eco’, yet one has to wonder how they will continue to exist when oil costs $150 a barrel. Apart from a few notable exceptions which I will discuss over the coming days, very little was manufactured in the UK, and very little was ‘natural’ or ‘local’ rather than ‘green’. Two of my favourite quotes I observed as I moved around were;

Well done Rob, I just wanted to pick up on the last point, that we need to teach people to ask the right questions. This is true of Peak Oil in general- the most common initial response is “What will we use instead of Oil?” rather than deeper questions about how we live our lives, levels of consumption, energy addiction, environmental costs of extraction…. and as far as building concerns, issues of design of course.

I visited Ecobuild and attended Rob’s talk (which by the way was great).

Doomsday here, peak oil there, at least some of those men in suits had the chance to hear what Rob has to say, or to see strawbale or hemp as building materials. Think back a few years and that would have never happened. 1 step at a time (yes, I know time is runnning out, but I think it’s better to get something done then to bury our heads!)

We run a project called the Cafe Van http://www.cafevan.org), where we go onto building sites and take over the tea or lunch break. While ‘Bob the Builder’ has his cuppa and toasted sandwich we give a presentation to raise their awareness of environmental issues on building sites (incl. waste management, new legislation, and yes, we do explain sustainability in its purest form – Brundtland 1987 definition). What strikes us is that most of those ‘bog-standard’ builders we talk to actually would like to do more for the environment, but are often hindered by a lack of facicilites or understanding higher up the chain (e.g. architects, designer, building control, planning departments,etc.)

Anyway, enough of me rambling on – well done Rob and all the Best for getting the message across to a wider audience.