« Transition Culture Presents the UK Premiere of ‘The Power of Community’.
Why Nuclear Power is a Non-Response to Peak Oil – Part 1. Do We Really Have to Argue All This Again? » 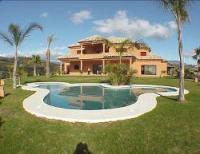 The Independent on Sunday this week had a supplement with it called “Overseas Property” full of ways that British folks can buy their ‘dream holiday house’ in Spain or Portugal. The giveaway of course was in smaller print on the cover, “produced in association with British Airways”. Yes, of course. It is the cheap air travel that makes “buying your dream home by the sea” even a starter. I have got to feeling that there is something terribly undesirable and impendingly disastrous about all this. I’m sure some people will disagree, but I think there is something very important at issue here.

We have a very worrying trend emerging here. Over half a million British people have homes in Spain, indeed according to the IOS piece, of all property sales in Spain last year, 42% were to British buyers. 42%! A fair proportion of these are in the ghastly towns along the coast that are like English enclaves, all chips, lager and the Daily Mail. But increasingly it is in other parts of the country, and on a staggering scale. There is of course a big difference between those who buy purely as an investment/holiday home, and those who reside full time, work the land and contribute something to the place.

Newspaper supplements like this are full of advice about what a great investment it is to buy property there. One article quotes a man from Kent who just bought a house there… “in recent years, more people have started visiting and buying in this region and, now that EasyJet flights have started to Lisbon, I think that this whole area really looks set to boom”. Oh goody. I bet the locals will *love* that. 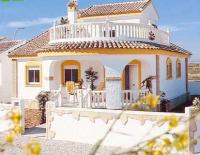 Of course the weak part to all of this is the “EasyJet flights have started to Lisbon” bit. Whole areas of Europe are becoming getaways for second house buyers, from France to Spain and from Romania to Portugal, and the areas chosen usually are within a certain radius of cheap flight airports. One article in the paper, “Buy the Best of Two Sunny Worlds” features a selection of ‘choice’ properties, with one of their criteria being an ‘accessibility rating’, which basically means distance from an airport. “Only 55km from the well-served Malaga Airport”, or “a comfortable 40 minute drive from Alicante airport” they say.

The problem is that when fuel shortages start kicking in, when the price of aviation fuel starts to rise, all of a sudden having a house miles away that is that much harder to get to becomes distinctly less attractive. And usually people are mortaged to the hilt to buy this second home, so in order to meet the repayments they let the house over the summer. When much less people start going to these places, a lot of people are going to be left high and dry, with a house they paid well over the odds for that nobody wants. I am very fearful for a lot of people in this situation.

This feels to me like a time in history when the urgency is to decide where you want to be when Peak Oil kicks in (which could of course be Spain or Portugal…), decide where is home, and start settling into it, building your networks, insulating, making a garden, trying to get out of debt, rather than taking on more debt in order to have your (part-time) piece of Paradise. The thing that we have forgotten is that we can make where we are into Paradise, rather than chasing an illusion half the way across Europe.

We have to remember the vast industry that has built up around trying to part people from their cash in exchange for this property. Not the most scrupulous bunch (although there are of course exceptions). A friend on mine recently went on a free 5 day trip to Spain, where you agree to look at 3 properties in exchange for a free 5 day all-in break. How could he refuse? He only just escaped without buying a house he didn’t want, so skilled were the salespeople. He was amazed at the scale of it all down there, at the sheer amount of non-Spanish folks. What happens to the indigenous communities?

The core of my somewhat incoherent argument is that this is a profoundly unsustainable trend. The UK economy is doing well, so people feel they have excess money. Rather then spend it getting out of debt or retrofitting their homes and putting in essential post-peak infrastructure such as glasshouses and solar panels, they decide that, as an ‘investment’, they’ll buy a house in Spain, holiday in it for 6 weeks a year and let it for the rest of the year. What could go wrong? Well, peak oil for starters … the price of oil rises, cheap airflights are no longer so cheap, less people holiday in the area leading to a glut of properties to rent so their rental income plummets. The UK economy starts to contract so interest rates start to rise, they decide that this is one ‘luxury’ they could really do without so they decide to sell it but it has lost a lot of its value and their is a huge glut on the market as second-home owners try to cash in their homes, and they end up very out of pocket, in deeper debt with their actual home, and without the wherewithall to actually invest into where they are. In these countries as well, where rural economies in some places are really starting to feel the effect and to change from agricultural economies to service economies serving wealthy visitors, how much of a struggle will it be to adapt? What happens to the young people who find themselves priced out of the market? This is one rapidly increasing trend that will lead to a lot of people coming a cropper.

If you are in the position of having money to invest, and you have already ‘peak-proofed’ your home and garden, then there are plenty of things you could invest in that would still be a good investment but would also be helping the area where you are. It is of course difficult to say what will constitute a good investment in a contracting economy. Mike Ruppert and also that dreadful ‘Wake Up!’ book I slated a while back all suggest gold, hidden somewhere in the house (there does seem to be something profoundly unskillful about putting a piece on the Web telling all and sundry that you have invested in gold and hidden it in your house….) as one of the few things that won’t lose its value.

A somewhat more permacultural investment is to plant walnut trees, which give a good return in terms of nuts and timber, or trees like cherry and wild service, that are very valuable timbers. You can invest in community renewables projects such as Westmill Wind Farm Co-op which was oversubscribed, or in local eco-village initiatives. The whole area of ethical investments is rapidly growing too. The essential point is that if you have cash to invest, you have the potential to make it do something, for good or for ill. Investing overseas in a vastly overinflated and vulnerable property market which is dependent on carbon-generating travel and not-cheap-for-much-longer aviation fuel is not an ethical investment. We should be reinvesting surplus back into our local economy in order to help it prepare for peak oil.

Those of us pushing Energy Descent Plans and relocalisation initiatives need to get our skates on with creating secure and attractive structures and initiatives whereby people can invest in their home place and know that their money is doing good things. The idea of a local ESCO or Energy Service Company that I have previously sketched out here at Transition Culture could well provide that vehicle. We need to see that it is not just a question of Paradise for ourselves, but an abundant future for us all. We need to decide where Home is. For a rootless generation with nowhere to call home (and I include myself here) perhaps deciding where home might be and deeply rooting ourselves there is one of our greatest challenges.

My motto….buy local and rent for the holidays!

Well written. But peak oil is already behind us…

here in the USA, things aren’t much better. people are buying homes in california that use as much as 50% of their monthly income using an interest only adjustable mortgage. when the interest rates adjust after 5 yrs they’ll be paying a lot more!

Oil will never go below $85 again. In 2010 oil will be over $250 a barrel and gas will be $10 a gallon. Even though reserves are rising which should make oil prices drop the fact they don’t drop in price is because the political tensions are rising. With that you will either buy a hybrid which will still be expensive to operate or ride your bike or take the public transit. There are ways to reduce your fuel cost.