« Reading the Signs…
Leading the Way Conference and the launch of the D.A.R.E. Report (downloadable here…) »

Well not in so many words, but I think that historically when we look back for the day that peak oil was reached for the UK, it will be 16th May 2006. Tony Blair’s speech to the CBI was a carefully stage managed trailer of the supposedly independent energy review process that has been going on for many months, and came out in favour of nuclear (hardly a surprise). The UK Government, despite being in deep denial of the subject publically, as was illustrated in Energy Minister Malcolm Wicks’ letter to PowerSwitch, have of course been clearly aware of the matter for years. Indeed Tony Blair’s speech to the CBI could have been re-titled “PM acknowledges peak oil” and would have read exactly the same. Try it.

>Yesterday I received the first cut of the [energy] review. The facts are stark. By 2025, if current policy is unchanged there will be a dramatic gap on our targets to reduce CO2 emissions, we will become heavily dependent on gas and at the same time move from being 80-90% self-reliant in gas to 80-90% dependent on foreign imports, mostly from the Middle East, and Africa and Russia.

>These facts put the replacement of nuclear power stations, a big push on renewables and a step change on energy efficiency, engaging both business and consumers, back on the agenda with a vengeance. If we don’t take these long-term decisions now we will be committing a serious dereliction of our duty to the future of this country.” 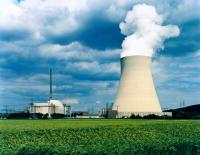 How does he propose that nuclear power will keep 75 million cars on the road, and our lorry transportation infrastructure going? Has he thought beyond the inevitable disruptions to and contraction of our transport base? As I have written before at **Transition Culture**, this is a decision that of course most people in his position would have made. Politicians are now renowned for visionary thinking. Even our greener-than-green Tory leader David Cameron is expected to back some kind of nuclear capacity.

As well as looking back to May 16th as the day the Government finally acknowledged Peak Oil, it will also see Blair’s announcement as being the day that the UK officially cancelled permanently any hope of a co-ordinated and Government initiated Powerdown. The Government lost its bottle. That’s it. Millions can now roll over and go back to sleep in the belief that the energy chasm that lies before them has been bridged. It has not. A very thin carpet has been rolled over it, with a very attractive floral motif, but as soon as we step on it we will find it will not carry our weight.

This is no leadership, this is a loss of nerve, and a dreadful deception. This was an historic decision. Yet another major stain on Blair’s leadership, another thing history will judge him badly on. In much the same way that in the US, people have given up on the Government ever doing anything about climate change, and instead local authorities have developed far more stringent, locally implementable policies and programmes, we have now had a very clear sign that we need to do this on our own, without Government. This is down to us. A combination of resistance towards any new stations and working at the local level to develop economic relocalisation is the only way forward left to us. Luckily, apart from the ‘resistance towards any new stations’ bit, its what we were planning to do anyway. How will you commemorate “UK Peak Oil Day”‘s first anniversary next May?

This does feel like some line drawn in the sand, any faith we might have had in government eventually waking up to what is really going on and acting appropriately seems to have gone out the window.

Its grassroots activism all the way now, fighting every battle as it comes along, whiel we do our best to change everybody’s consciousness.

The media has represented the “anti-nuclear” resistance in reporting this story – largely it appears through the figure of Tony Juniper. He’s had lots of important things to say, but I feel that in these soundbite times we have to prioritise our expressed reasons against these developments.

Talking about the terrorist threat created by having more potential nuclear targets, and the hypocrisy of our position over Iran when we choose more nuclear power are points that are all well and good. But in those brief moments of reply afforded by the media, it seems to me that the anti-nuclear resistance should concentrate on destroying the pro-nuclear arguments on its own terms, I.E.:

1) That its a low carbon solution – some pithy way of highlighting the carbon emissions across the lifecycle of nuclear power generation needs to be found.

2) That it deals with problems of energy security – there is never any mention about Uranium imports, or being dependent on foreign supplies of nuclear materials & technology, or the competition for nuclear materials.

3) That its a long term solution – lets foreground global supplies of uranium and the “peak uranium” concept.

4) That its a business as usual solution – even with nuclear, a radical decrease in our energy usage is essential.

Looks like we’re going to have to fight them on the beaches, and the estauries and anywhere else they want to build one of these tombstones.

Is it just my imagination or does Tony Blair look more like Prince Charles every day?

Problem is I don’t have quite the same feelings of violent anger towards Charles as I do towards Tony. In the last 48 hours I’ve watched ‘The Road to Guantanamo’, listened to Rob Newman’s ‘Apocalypso Now’ and read George Monbiot’s piece A Well of Hypocricy. The result of all of this was that last night I a had a very vivd dream in which…. *!?#£$!….. **deleted due to fear of being labelled a terrorist** (but it wasn’t pleasant and it involved a fella called Tony and some high powered weaponry). I’ll spare you the gruesome details and I know it wouldn’t change anything if he copped it – but I feel he should know how is divisiveness has made me feel! Grrrrrr!

So the fall-out begins already…

I’l spare you my wrathful howlings at the news and limit myself to a few adjectives:

i) the fact that these newly intended nuclear power stations may not even get built…? What if we’re already post-peak enough to disable the construction effort and timescale required at such a scale?

ii) the ‘nuclear power stations drown upon sea-level rise attendant upon imminent (and immanent) global warming’ hypothesis? And that goes for the ones already existing, as well as any new ones our Tone and his CBI controllers deem it necessary to build (necessary that is to assuage their enormous distorted egos and ensure the flow of profit and growth unto death);

iii) the idea that nuclear is at best capable of a tiny and insignificant contribution to domestic and industrial energy needs only… ‘keeping the lights on’ is the absolute best case scenario for nuclear – its an irrelevance on every other scale and mode (even somewhere like France with its 80-odd percent nuclear dependency); do we really want the lights on that badly? Are we that scared of the dark?

Love, vitality and deep camaraderie to everyone feeling the full horror of these demonic events today – may we all have the skill, the resources and the fluency to expose this great and despicable con for what it is – and may enough of the lost and hypnotised now be shaken from their consensus trance to halt this hubrsitic madness with the power of their outrage and the brilliance of their imaginations.

What ever happened to the report alluded to in this BBC article? http://news.bbc.co.uk/2/hi/science/nature/4778344.stm

Uh, I think it got ignored. President Blair knows better you see.