« ASPO Conference in Cork – A Report.
Margaret Wheatley – Bringing Chaos to Dartington… (in a manner of speaking) » 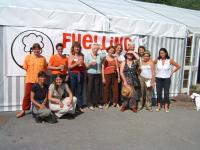 I’m delighted to see a discussion emerging within the peak oil community about the role of women and why they are so poorly reflected in the movement, (or whatever it is). When I organised the Fuelling the Future conference, it became clear that the gender balance was all over the place. All the speakers were men, while the majority of the organising team and the volunteers were women. In organising the event and selecting speakers I have to admit there was no conscious process of selecting speakers based on gender, I just invited the people I thought would have the most to contribute and who people would most like to see. 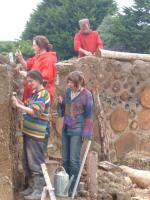 It is possible that there are a lot of women speakers out there who want to address peak oil conferences, and that somehow a cosy club of white peak oil males are somehow keeping them out of the picture. My experience of organising FTF suggests, to me at least, that this is not the case. I would have loved to have some female speakers, but I also wanted to organise a peak oil conference with as many of the leading names in the field as possible, and at that point, they were all men. It was as simple as that really. Now if I organise another, it will certainly be something I shall bear in mind, but even now, certainly in the UK, beyond a couple of people who spring to mind, I would struggle to field a sizeable number of female speakers with a good grounding in peak oil who would have the ‘pull’ that a conference needs. 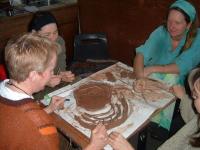 I do think this is less of a problem for the kind of conference that I would put on than it would be for a more straightforward Peak Oil event like ASPO, as speakers are drawn from wider range of backgrounds, like at the Community Solution conferences in the US that combine more straightforward peak oil speakers (the Heinbergs and Kunstlers) with others with an overlap with peak oil, i.e. farmers, eco-village pioneers, community activists and so on. Not only does a conference like this make for a better gender balance, but also for a more interesting event.

A few very good articles are now emerging on this. A piece by Shepherd Bliss called Gender, Peak Oil, and Culture: Part One explores this whole point in a very useful article. He starts by talking about his observations of watching the End of Suburbia and wondering where the women were in it. This point is also raised by Carolyn Baker in an excellent piece called Post-Petroleum Woman, who writes *”there are virtually no women in the documentary—except the ditzy fifties caricatures who consumed everything that wasn’t nailed down”*. So, no women in the End of Suburbia, none in the speakers at Fuelling the Future, almost none at the pre-conference get together that PowerSwitch organised that I attended, and none on the list of speakers for ASPO 5 in Italy this summer. Where are they?

Shepherd Bliss writes;
>Peak Oil work beyond scientific and academic communities is relatively new. Our dominant culture tends to assign public matters to men and personal matters to women. So far, Peak Oil has been perceived more as theory to be debated and as something public. However, it will soon become more personal as its multiple consequences unfold. The various issues that gender and culture raise should be addressed not only by women and people of colour but by all of us, since they are at the core of crafting sustainable post-carbon societies that would not repeat the shortcomings of the past. 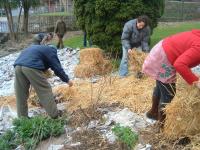 My sense is that the emergence of the female voice within the peak oil community is parallel to the emergence of the solutions-focused responses, through relocalisation initiatives, Energy Descent Planning and so on. The issue is moving from “is there a problem” (generally the domain of male dominated realms like petroleum geology and economics) to “what do we do about it?” (more the realm of communities, families and movements such as permaculture and natural building, where women are much more represented). This is a shift of the greatest importance, and I for one, find it hugely exciting. 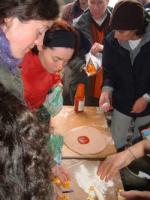 There is a discussion that needs to take place among women about why they struggle to raise their voices within the peak oil community (a discussion which started happening spontaneously at FTF), and also within the wider community as to what can be done to encourage that voice. Certainly it is something I now really try to bear in mind in Energy Descent Planning work. For example, when doing the Oral History interviews about how Totnes functioned before oil, and how energy affected people’s lives over the years, giving equal balance to the stories of women, perhaps even more so, as in those days they were more responsible for ‘domestic duties’, and therefore had a more hands-on role in terms of day-to-day energy use. The emerging voice of women in the Peak Oil/Energy Descent movements is very welcome, and symbolic of the issue moving away from a focus on graphs, statistics and depletion profiles, towards communities, families and a more-solutions focused and inclusive approach.

Agreed, Rob – I too spotted and read with interest the Carolyn Baker and Shepherd Bliss articles (Shepherd Bliss… some great images conjured by that name, or is that just me?) on Energy Bulletin.net, and they both created a deep resonance for me.

I think there is enormous need for the feminine (and more people in female bodies) to engage with and express in new forms responses to and approaches for the Great Turning. If peak oil is actually in some sense just one aspect of the zenith of a wider cultural phenomenon, call it ‘Peak Patriarchy’, then the clear and timely expression of the full-force of the feminine (through women, men and life itself) is utterly necessary, it seems to me.

No one ever got enlightened, achieved happiness or connected with their own deepest, fullest purpose through one polarity alone – we need balance, a Joanna Macy for every Kunstler, a fiery red Dakini for every grey-suited senex in power somewhere, a Persephone for every Apollo…

…and as the feminine is more present, more visible and included, then the masculine energy can also become itself more fearlessly, released and in its authentic place rather than distorted and twisted out of shape into the brutal acting-out of too-late capitalist violence we know all too well.

If the post energy descent world is to be an attractive, enhanced one experienced as such by humanity, then it will manifest as that through the inclusion of the feminine – no more the worship of Moloch as the endlessly entropic ‘growth economy’, but the growth of consciousness and culture grounded in sustainable and life-affirming ways on the Earth. Culture over civilization every time.

And if the exclusion and distortions of the feminine energy continue unabated in all their forms, be it environmental degradation and exploitation, the conditioning of young women into uber-consumers, or the rape of the mind and body in violence and dominator hierarchies, then we had all better watch out for the ultimate wrathful expressions of that same feminine energy – in the oceanic swallowing and super-tempests of climate change, in Kali dancing, in the murderous rage of the slighted Great Mother. Hell hath no fury… Perhaps this is the nascent warning Lovelock is whispering at the moon, even this rational man of science and conscience feels the need to unlock the only force that could serve and save, the love his own name contains, the Romantic inheritance, as an invocation, an appeal, a prayer before the tipping point of Gaia’s revenge.

Women become ‘leaders in their field’ by being repeatedly exposing the public to them when they give lectures. This is a situation you create, like the way you create a CV, or a career. Men groom eachother professionally. If you are interested in a better balance, create a better balance.

Or go where the women (already) are. I think there is nothing wrong with tweaking the programme or offering a bit more PR to the women (however artificially) chosen to speak within this field. An added benefit is that young women will be inspired by successful role models and start to see the field as a potential platform with public visibility – also for them.

“So, no women in the End of Suburbia, none in the speakers at Fuelling the Future, almost none at the pre-conference get together that PowerSwitch organised that I attended, and none on the list of speakers for ASPO 5 in Italy this summer. Where are they?”

. I’m here. My problem is that I’m too busy tearing up the yard to plant fruits and vegetables and setting up water reclaimation systems to worry about speaking at a conference.

And this could simply be the basic biological difference between men and women. Even when we have a choice, we still tend to pick different work. I think Matt had it perfectly right when, in this article: http://www.lifeaftertheoilcrash.net/OriginalArticles/whymen.html , he put up a picture of a peacock to represent himself. And it seems that women tend to spend more time, even more of their leisure time, doing something practical. Even in my own household, I see the gender difference…my husband spends much of his leisure time playing online video games with his friends so they can insult each other (called ‘trash talk’ around here), while I spend much of my time soaking up information or passing news onto a (another female) friend, or even just talking with my children to spread my “wisdom”.

“Even when we have a choice, we still tend to pick different work.”
I’ll second that.

But another aspect of this is, men and women at times have different communication styles (ref the works of Deborah Tannen, John Gray, etc). In my humble opinion, most of the peak oil books and studies are written in a deeply scientific analysis male style. Most of my friends at home “soaking up information or passing news onto a (another female) friend, or even just talking with my children to spread my “wisdom