« A New Way of Showing The End of Suburbia (for us anyway).
ASPO5 Programme Unveiled! »

5 Great Things About the Eden Project #3. The Biomes.

**Wow**. The biomes at Eden are the largest greenhouses in the world and are utterly stunning. As you enter the biomes your breath is truly taken away. These massive structures are impressive from the outside, but it is from the inside that you really come to appreciate their majesty. They are truly mindboggling structures. The first thing that hits you as you enter is the heat, particularly in the tropical biome. Once you get in and start walking around, it is fascinating how they have actually used the space, and the amazing collection of plants they have assembled.

The **Humid Tropics Biome** is 240m long, 110m and 50m high. It contains over 1,000 plant species which represent humid ecologies from around the world. There are some amazing trees and shrubs, but the thing I really liked was the focus on useful plants. Being from South West England and having lived in Ireland for the last 9 years, I have never seen, for example, a peanut plant, or how cashew nuts are grown.

Every plant is labelled, with very accessible information as to its origin and its usefulness. The Eden Project, within the domes, are trying to reinforce the point that mankind needs plants, that they are central to our survival. Their message is that agriculture and conservation can go hand in hand around the world. To this end, much of the emphasis is on plants that are useful, whether for resins, food, timber, medicine or whatever. There are some staggeringly huge bamboos! Also within the biomes they have made food gardens representative of kitchen gardens in various parts of the world. The message that you get as you walk around is that plants are a central aspect of peoples’ lives and that they are also incredibly beautiful, but they don’t shy away from talking about habitat destruction and climate change, and what is happening to these ecosystems around the world.

The second biome, the **Warm Temperate Biome**, is somewhat cooler (a welcome relief after dragging wingeing overheated children around the Humid one) and features plants from warm temperate regions, which are found on the Western sides of countries between 30-40 degrees latitude, such as the Mediterranean, South Africa and California. Again there is a focus on useful plants, and what agriculture produces in each of those places. This biome is a bit smaller and so is quicker to get round, having less of a ‘wow’ factor than the Humid one, but being fascinating nonetheless. 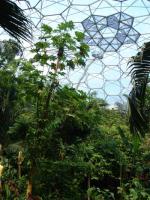 I did wonder how the biomes, particularly the Humid one, work without insects or birds. I did see lots of ants running up and down one of the trees, but I assume they were your run-of-the-mill English ants rather than exotic Amazonian ones. Although they are trying to establish and mimic ecosystems, it is hard to imagine how this can be without the fauna as well as the flora. Clearly there is a balance and you don’t want visitors being eaten by tigers, dragged off by crocodiles or going home with dengue fever, but I wonder about the long term ability of an ecosystem, albeit an artificial one, to sustain itself without that essential component. Anyway, I strongly suggest you visit these stunning buildings. I think however many pictures you look at of them, you can still only really get a sense of the wonder of these structures by being there.