Seeds of Hope … spied from a train carriage window…

The journey to and from ASPO5 on the train went well, despite a few just-made connections, a few missed ones, and a trip through London on a day when it touched 37 degrees, hotter than it was in Pisa! Travelling on the night train from Paris to Florence was a pleasure, I slept well and met some lovely people (hi Elizabeth and to Piero…), which probably wouldn’t have happened on the plane. ASPO was great, I’ll write more about that soon (I am supposed to be on a summer break, but I just wanted to let you know I had made it home in one piece), but was also quite depressing in places, and as I headed home, I drew a lot of hope for the future from the amount of gardens I saw from the train window in all the countries I passed through. 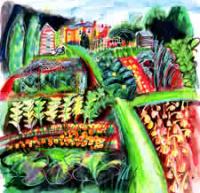 I am a great believer that the true wealth of of a nation can be measured not by the annual turnover of its multinational corporations or its GNP, but rather in the amount of its well stacked woodpiles and the number and diversity of its vegetable gardens. Heading out from Florence I was struck by the amount of well laid out and plentiful food gardens, densely packed vegetables alongside fruit trees, grape vines and olive trees. I was reminded of David Holmgren talking about Croatia and Slovenia, and how every house in every village had its food garden and wood pile.

Then heading up into France, again a wealth of food gardens packed in and around peoples houses in the rural areas, becoming less and less as we headed into the urban areas. As we went through the suburbs of Paris there were a number of 6 storey apartment blocks laid out perpendicular to the train, and looking down the gaps between them I was thinking “what a great place to have a food garden”, and then there, between two of them, there was an abundant community garden, with a number of people working in it. It is truly in such projects that we see the seeds of the emergent new culture. 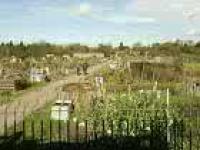 Once the Channel tunnel had been negotiated and the train entered the UK, the suburbs of London revealed many gardens and allotments along the side of the railway line. It is a time honoured tradition in England to use the land along the railway lines, and indeed many of the best examples of allotments can be seen in these places. Traditionally allotments were 2,700 square feet (about 250 square metres), and during the war years made the difference between malnutrition and health. Seeing these patches of land with their bean canes and potatoes in rows, and the amount of people working them, gave me a sense that the base of skills needed to roll out a wider programme of localised food growing and the people who can pass on their bioregion specific knowledge are in place.

Derided for decades as ‘old fashioned’, pressured by developers, concreted over for supermarket car parks, it is in these plots that our hope for the future lies. Despite the arguments over when peak oil will occur and what its effects will be that bounced back and forth over two days in a hot Tuscan tent, I returned again and again to James Kunstler’s statement that the future will be “intensely local”. If that is to be the case, then we will need to rapidly expand our urban agricultural and horticultural base, and my journey home from ASPO kindled my hope that we have at least a foundation on which to build.

I find myself mildly amused when I travel because I am so used to having a large garden and woodpile for my whole adult life (and much of my childhood) that when I find myself staying with friends, many of them well known and accomplished environmentalists and other useful professionals, who don’t have that and perhaps never had, they consider themselves normal and I am the odd nutter for suggesting something is amiss. Actually most of them would agree that having a garden is better than not having one, its just not for them personally. And at this time of year, hosting permaculture courses, when I am feeding more than 30 people out of my garden at every meal, it is tempting to take such abundance for granted, forgetting that what we eat now is the product of months of careful tending and years of soil and seed preparation. That is when the axe comes out and I have the woodpile to remind me its time once more to think ahead.

I loved the article and quite agree about the importance of allotments, I am thoroughly enjoying the fruits of my earlier labours at my own and enjoy just grazing and chatting to the neighbours about slugs and other important matters.

I have an organic fair trade T-shirt company and would love to use the allotment illustration at the top of the page. Who is the artist?

Oh how I love riding along in the trains in the UK and seeing those allotments, too! I know someone that is shocked that I didn’t grow up growing food, but for me, this is completely new. (Overflowing with courgettes but have given the broccoli and kale over to caterpillars…)

Did you know that town and parish councils are obligated to provide allotments? We’re starting a campaign to get more as the privately-owned ones have a huge waiting list…

Leaving the Channel Tunnel and seeing the gardens along the railway line sounds as if it was a beautiful site. It is a trip I hope someday to make. You make it sound so peaceful and relaxing.