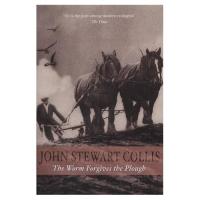 The question of how agriculture will adapt to life after the oil peak is one increasingly in people’s minds. Cuba is often cited as the paragon of urban agricultural inventiveness, rethinking their city spaces as intensive market gardens and their rooftops and balconies as productive spaces. While there is a huge and important role for urban agriculture in an energy descent culture, it is important also to remember large scale agriculture. After all, in the closest historical comparison to a national Powerdown, World War 2, every garden, allotment and open space in England and Wales was intensively gardened, yet still only 10% of the national diet was obtained in this way. The rest relied on agriculture and farms.

‘The Worm Forgives the Plough’ is a classic of English countryside literature. Collis was a writer and intellectual who had served in the First World War, and who was conscripted for the second, but posted within England. He asked if he could be transferred to work in agriculture, and this was granted. He spent a couple of years on a farm in Devon, and then the rest of the war restoring a woodland. Collis writes about a fascinating period in English agriculture, when mechanisation was arriving, but much of the traditional was still in place. Horses were used, hayricks were made, potato clamps built, alongside the newer tractors and fertilisers.

This is a book which is timeless in its relevance. Indeed his style of writing, divided into short essays of 2 to 3 pages on a particular topic, have far more in common with the blogging style of today than with the writing of the time. These short sections have some great titles, such as “Meditation while singling mangolds

Hey Rob, have you ever heard of the American writer Wendell Berry? I would think you have. If you haven’t, he’s probably the most prominent, and the most articulate proponent of a sustainable agrarian society in the U.S. He’s a poet, novelist, essayist, former English professor, and above all, a farmer on his family’s land in northern Kentucky, near the Ohio river. To him, a deeply rooted sense of place isn’t so much right up there with Godliness, but rather IS Godliness. Berry is also a devout Christian, in a rather unorthodox way. But I think he also would have a lot of good to say about the Peak Oil crisis, as he’s always been critical of the sort of industrialized, globalized spread of “progress” that is sucking our planet dry. He’s been saying this stuff for night forty years- that an industrialized society will never make people happy, and ultimately never be sustainable. He was right all along, but I don’t think he’ll be dissapointed when Powerdown comes. For him, Relocalization never really existed, since he never left the local sphere in the first place. Very good stuff, and very insightful in these times.