« The Pre-Launch Celebration of the Transition Handbook, Totnes, February 28th 2008.
12 Tools for Transition No.4: The Board Game – a tool for identifying your vision and making it real »

12 Tools for Transition. No 3: The humble potato becomes a tool for breaking our oil addiction: an exercise 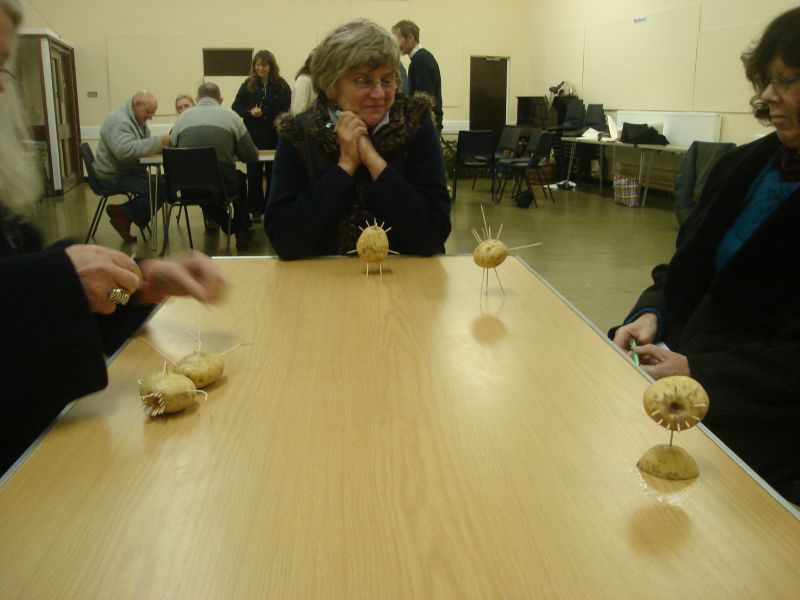 This activity evolved from an exercise called ‘bunyips’ in Skye and Robin Clayfield’s Manual of Teaching Permaculture Creatively, but is an evolution of my own devising. It is a powerful tool for giving people permission to explore how they might set about lessening their oil dependency. I have found it to be very effective with many different groups.

First Step
I use this exercise in weeks 9-10 of the ten-week Skilling Up for Powerdown course. It is a very useful tool for pulling all of these threads together, but it does require a degree of underpinning knowledge and enthusiasm, so is best not done too soon.

Second Step
Link our relationship to energy use and consumerism in general as being like an addiction, and then give the students a sheet which reads as follows:

“My Twelve Step programme for reducing my oil dependency. In order to make my life less reliant on the unreliable, I pledge to myself to strive towards the following 12 goals over the next 6 months.”

Tell them that by next week’s class they are to have filled out the sheet, with twelve actions which are achievable, practical but ambitious.

Third Step
Get people into pairs to do a five-minute each way ‘Think and Listen’ (see page 165) on the question “when you think about making practical steps to make your life less oil dependent, what are the obstacles you put in your way of doing that? What are the voices within you that block you taking firm steps?” Once they have discussed this, ask them to reflect in silence on their own for a minute or so on the question “what might the antidotes to this be? If you could name the qualities you would need to overcome these obstacles, what would they be?”

Fourth Step
Ask them if they were able to personify these qualities and strengths in a Superhero, what would his/her name be, and what would his/her powers be? Ask them to think about that for a while and then hand out to each person fourpotatoes and a few cocktail sticks. Give them twenty minutes to make their Superhero, and tell them that they will beexpected to introduce their hero to the rest of the group, its name and its powers.

They can also use anything else in their model that they find lying around. Once they have finished their models, break them into groups of five or six, and let each person introduce their Hero. Tell them that they are to take their Hero home, put him somewhere where they will need his/her powers while they are writing their Twelve Step Programme, but they are NOT to tell anyone in their house what it is, or else it loses its powers.

Fifth Step
The following week, when everyone has brought their completed sheets along, I start by giving a talk about the Transition concept and energy descent (this would be specific to what you are doing in your Transition initiative).
Then arrange them into two groups of an equal amount of people. One group sit in a circle in the middle facing outwards, the other half sit outside them and face in. Then they do a process based on Speed Dating. They have four
minutes in which to tell the person facing them about their Twelve Step Programme. Every four minutes you tell the outer circle to move one seat to the right. In this way everyone gets to hear half of the group’s plans.

Sixth Step
Divide them into groups of five or six and get them to sit around tables. This final session is based on the World Café approach (see pp.184-6). One person is the Table Host who takes notes, and everyone else discusses the issue. After 10 minutes everyone gets up and goes off to find another table to continue the conversation.
The three questions asked are:

Seventh Step
Once these three conversations have taken place and the notes taken, tell them that when the course runs again (you’ll have to adapt this bit to suit your situation) they will be asked to come in and mentor the people on the course, to tell them about their Twelve Steps and what they have done with them since they did the course.

Reflections
This exercise really gets people engaged with the idea of grounding these things in their lives. Steps they choose to make range from changing their light bulbs to doing a course, or from getting involved in their local Transition process to
selling their cars. The exercise with the potatoes is very powerful. If you asked them to model their Superheroes in clay, the models would become very precious and overworked. If you ask them to make them in knobbly potatoes and
cocktail sticks, it is impossible to make them in any way that they do not look ridiculous and daft, yet at the same time people imbue their characters with all the powers of their Heroes.

The full 12 Tools for Transition can be found in The Transition Handbook, which can be purchased online here.

Spudderman? Golden Wonder Woman? Mash Gordon? Not sure whether I could take part in this without cracking up! Any more suggestions for superhero names for this anyone?

i have only done the first part of this exercise(designing my own 12 step programme) but was amazed at the plans and ideas that came out of it. even though it was just me and my partner brainstorming initial ideas then picking the ones that resonated with us to incorporate into our own programme, the diversity of ideas was enormous.

straight afterwards i leapt off to put a bottle in the loo cistern (part of one of my 12 steps – it’s daft how sometimes i never get around to small things, despite doing bigger things like getting rid of my car!) only to find that there were not one, not two, but three milk bottles already displacing 4 pints without me or my partner ever noticing!

i now have a plan to ‘guerilla water save’ at the houses of friends and family and publicly accessible loo cisterns. ssh! don’t tell anyone – they’ll never know!