« Another Review of The Transition Handbook
12 Tools for Transition. No 3: The humble potato becomes a tool for breaking our oil addiction: an exercise »

The Pre-Launch Celebration of the Transition Handbook, Totnes, February 28th 2008.

Last week saw the first unveiling of The Transition Handbook, at the Civic Hall in Totnes. Around 150 people came along to the Celebration, and were greeted on arrival by music from local band the Jawa Trio, who played both at the beginning and at the end of the evening. Most of the Transition Town Totnes groups were there, with tables and displays highlighting the work they have been doing over the last 18 months. The evening began with John Elford of Green Books calling the Handbook “the most important book we have yet published”, and telling the story of how they ended up being the book’s publishers.

Totnes Mayor David Horsburgh then welcomed everyone and told the audience that was has delighted that the Transition initiative had so firmly put Totnes on the map, and how happy he was to have been involved with it on several occasions. I then gave a short talk, which you can hear most of here (you can even download the mp3 of it if you are so inclined) thanks to the wonders of Traydio.com, our local online radio resource. You can also hear a short interview we did after the launch here. I talked about how the book has three parts, The Head, The Heart and The Hands, and gave an overview of what each contains. Near the end, about 10 of the people who have been around TTT since its early days spoke briefly about one thing they remember that really touched them.

One of my favourites was Julian Burn, a local boatbuilder (see left), who told the story of the night of the launch of the first Totnes Pound. A customer of his from a nearby town, travelled to Totnes and came to the launch, intending also to settle an outstanding bill for £350. He sat down with Julian, and wrote him a cheque for £349 and gave him the Totnes Pound to make up the difference.

After my talk, the band played, I signed lots of books and tried to pretend I hadn’t forgotten peoples’ names, and much chatting and general hanging out went on. I have only ever been to one book launch before, but I have to say that as far as book ‘celebrations’ go, it was rather nice. I had so much fun that I didn’t notice that my kids had gone over to my computer, which was still connected to the projector, and had changed my desktop picture to a large and rather larey picture of Crazy Frog, gurning at all those attending. 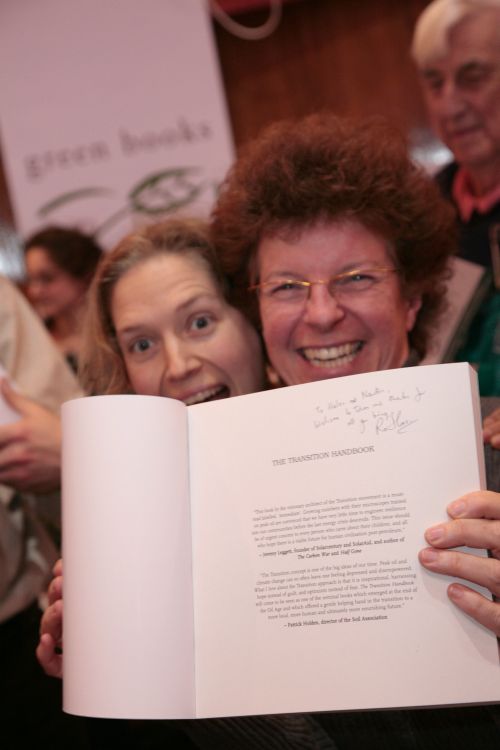