« 12 Tools for Transition: No.9. Designing Productive Meetings
A Journey to Findhorn »

12 Tools for Transition: No.10. How to Run an Open Space Event 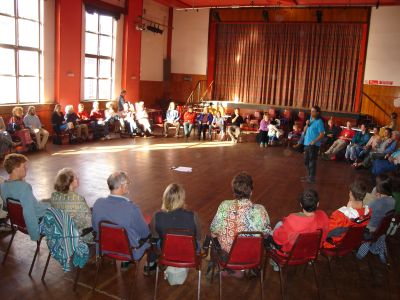 If you are a control freak, you will hate organising an Open Space event! It involves a lot of trust that the process will work but at the same time I have never seen or heard of one not working. Open Space is a powerful tool for engaging large groups of people in discussions to explore particular questions or issues. It can be used with groups from anything between 10 and 1,000 people. Open Space has Four Rules and One Law (the Law of Two Feet).

and The Law of Two Feet states that:

“If, during the course of the gathering, any person finds themselves in a situation where they are neither learning nor contributing, they must use their feet and go to some more productive place.”

Key to a successful Open Space event is the question – which is usually in the title of the event – which sets the ground for what is to be under discussion that day. Some examples from Totnes include:

You may choose to invite specific people, or just leave it open to whoever turns up. Your venue needs to be large enough to take those who attend sitting in a large circle. You need walls on which you can stick things, and you need enough other space for several break-out areas. When people arrive they take a seat in the circle, and when everyone is gathered the event begins. In the centre of the circle is a pile of sheets of A4 paper and pens, and on the wall is an empty timetable, with the timings of the different sessions on one axis, and the various breakout spaces on the other (see below).

Each of the squares is the size of an A4 sheet. Explain to people the rules of Open Space and that the only prerequisite for proposing a question is that you will host that discussion and scribe the conversation for the benefit of anyone unable to participate, and write that name on the sheet, and post it on the timetable. Then say “Go!”. This is the nerve-racking bit:
your heart will be in your mouth the first time you do this, worrying that no one will come forward, but then one person does, and the floodgates open.

What follows is a ten-minute mêlée of people proposing questions and sticking them up. You may well end up with more questions than you have slots available, in which case consolidate some of them together, for example, three or four may be on different aspects of community energy generation and so could be rolled up into one session on that subject. Once your
timetable/agenda is full, allow people a few minutes to look at it and work out what they want to go to, and then ring a bell, or something similar, to announce the convening of the first session.

In theory, the rest of the day will organise itself. Each break-out space should have plenty of flip-chart paper and pens. At the end of each session, ring a bell to let people know it is finished, then go round and collect up the notefilled sheets, and put them up on the wall in the area you have pre-designated as the ‘Market Place’. You may also choose to have someone typing up the sheets, if you are posting the proceedings live on the web, or even if you just want to get to the end of the whole thing without endless typing to do. A bit like washing up, typing up a pile of flip-chart paper looks far more daunting the next day.

Tell people when each session starts, and remind them about the Law of Two Feet. The event will then, basically, run itself. Leave 30-40 minutes or so at the end for a go-round, for reflections on the event and the process itself, rather than issues raised. Harrison Owen’s book Open Space Technology2 sets out ways that Open Space can be used in longer two- to three-day events, which people leave with a full set of minutes, but this scale of event is more appropriate for corporations than for Transition Initiatives, as it would be difficult to find many members of the community able to give up 3 days of their time.

Open Space is surprisingly easy to run, and an amazingly powerful way of exploring issues. What it does is draw out all those who are really passionate about a subject. For your first one you might find it useful to have someone with prior experience of running Open Space to facilitate it, but once you have a successful Open Space under your belt, you’ll marvel at how simple it is! You will find a really good short film about running Open Space, based around the one we ran at the Inaugural Meeting of the Transition Network below;

I thought readers might be interested in Transition Town Westcliff’s first experiments with Open Space Technology – personally I’d used it before at permaculture related events, but it was the first time I’d tried it on ‘the general public’…

Coverage of our recent Open Space event on post-cheap oil food security for Westcliff and the surrounding area;

I am the Coordinator of a Special Projects Team working on a Memorandum of Understanding on Health and Well-Being for the Federation of Saskatchewan Indian Nations in Canada. FSIN represents 74 First Nations here is Saskatchewan. The MOU is between the Provincial Government, the Federal Government of Canada and First Nations. We will be using Open Space Technology Meetings on March 4th, 12th and 24th in north, central and southern locations in our region. This website has been really useful for our planning purposes. We will be having a ‘practice session’ with the Heatlh and Social Development Commission Staff this Friday. We are pretty excited. Thanks again for this support.