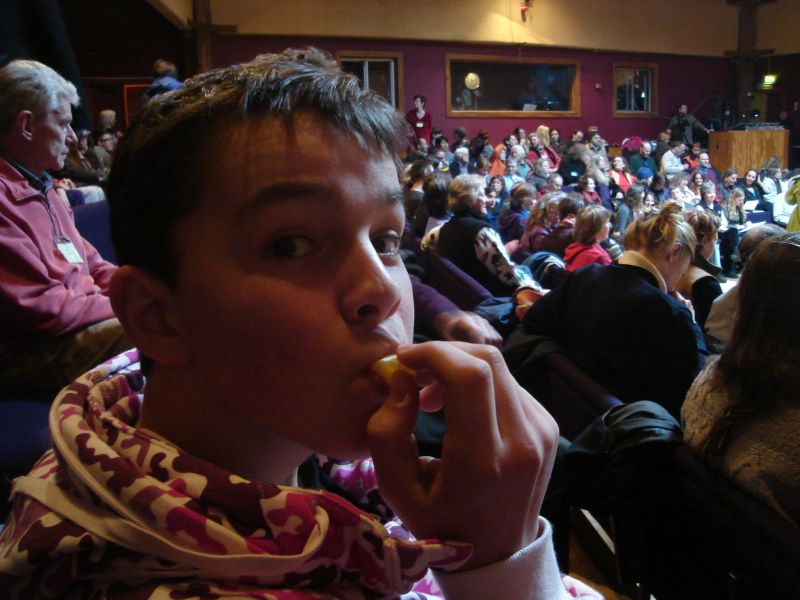 Today started with me being roughly awakened by Rob (my dad), I did not get up, of course, instead I rolled over and grunted with anguish at the outrage at the outrage of being awoken at such hours (8am!!). After I was turned out of my bed I stumbled into the bathroom for a shower, going in just a towel was a bad idea for the shower did not work, and therefore I had parade into the breakfast room half naked, with all the guests in it! They told me I had to press a button just outside the bathroom, outside the bathroom, what do they possibly gain from that?

At about nine me and Troy (another guest of about nineteen) went to play a bit of football with the locals, this was where I discovered two things, I can NOT play football and that when I kick a ball my shoes fly of and injur some poor by passing Scot. After football I returned to the cabin and read a bit of my book, “Orcs”… whoop whoop.

I then headed to my second session today (I missed the first for the footie), This was the first session in the week with Joanna Macy. This session started with her quickly introducing her self and she then talked about leadership and the responsibilities that come with it.

We then got into groups of three for the next exercise and talked about how to become one to face the problem and we gave thanks to the people who will or would help us. We then sung a song about god (Disclaimer: It just wasn’t my thing.You may need to funk it up, maybe rap about god lol).

Tea break! Whoo. In the second part of the session we milled around and then held hands and reflected, although this sounds dull it was surprisingly enjoyable. We finished of the day with a light supper of splodge (tastey splodge) and barley (the Scottish equivalent to rice, reminded me of the tea like substance from the train). much love thx for the comments…

I love barley – one of the many good things about Winter. Big hearty stews full of swede, carrots, tatties and barley. Mmmmm.