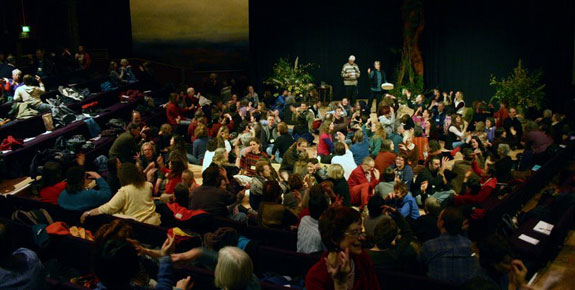 The afternoon session focused on Seeing with New Eyes. For this session, Joanna gave an overview of systems thinking, arguing that the time of the Great Turning will be a time of a return to a deep understanding, to what Tich Naht Hanh calls ‘Interbeing’. When we go out into the world to take our part in the Great Turning, we need more than just our feelings, they come and go, we also need a grounding in the new comprehension of the world that is emerging in systems thinking.

She then gave a deep and thorough introduction, which she called “a condensed version of a university semester in systems thinking”. Unfortunately, given that it was the session just after lunch, and there was one part of it where my eyelids reached excessive levels of droopiness, and also the fact that the official Findhorn conference blogger is doing a much better job than I am, I will, for this session, and in order to do what Joanna said justice, put a link here to her write up of this session.

The next session began with the following poem;

A Thousand Years of Healing

From whence my hope, I cannot say,
except it grows in the cells of my skin,
in my envelope of mysteries it hums.
In this sheath so akin to the surface of the earth
it whispers. Beneath
the wail and dissonance in the world,
hope’s song grows. Until I know
that with this turning
we put a broken age to rest.
We who are alive at such a cusp
now usher in
one thousand years of healing!

Winged ones and four-leggeds,
grasses and mountains and each tree,
all the swimming creatures,
even we, wary two-leggeds
hum, and call, and create
the Changing Song. We remake
all our relations. We convert
our minds to the earth. In this turning time
we finally learn to chime and blend,
attune our voices; sing the vision
of the Great Magic we move within.
We begin
the new habit, getting up glad
for a thousand years of healing.

She began by picking up the poem’s theme of 1000 years of healing, and the need to see with new eyes. We need to broaden our context of time, the context in which we see this work. We call this Deep Time work. If we could experience ourselves as part of the journey,we would perhaps deal with things like radioactive waste in very different ways. Our human chapter is so recent, yet we are doing things with such long implications. Depleted uranium shells, used routinely in Iraq, creates a radioactive waste that is so fine, so light, that the slightest wind picks it up and wafts it around. We can see our relation to time in this material, with its half life of four and a half billion years.

So we discount the future and those that follow us, and in the main we have become compliant in this. The way our culture experiences time is unprecedented, fragmented, it is making us suffer. We all feel increasing time pressure, less time to think, to be, to vision, to spend with family, to be in our gardens.

Market forces, the industrial growth society can’t just continue but must accelerate. It drives itself in a positive feedback loop. The pressure is always to speed up, speed up. For the first time in history time is measured in such small bits of time that we can no longer actually experience them, nanoseconds. Deep Time work is an antidote to that, the realisation that we belong to so much more than just this moment. The future ones are within us, within our ovaries, our gonads and our DNA, and we can become aware of their thanks and gratitude.

We then did the exercise of meeting the Seventh Generation, where the group formed into two rings, both facing each other. One took the role of someone now, here, today, in the Great Turning, and the other took the role of someone from the 7th generation hence, in 2208, in a time where humanity had made it, had arrived. We then asked each other questions about how that time had been and what inner resources had sustained us though that time. It was a very moving practice.

Joanna’s final session brought us round to the y to care, and the wellspring of the intention can guide your every step. It is important to know that uncertainty and risk taking will take you forth, but there is only one thing you can count on in this. Your intention. Put it behind your ear, in your heart, anywhere, but cherish it. There are huge evolutionary forces at work because this is the time of the Great Turning. It can of course break our hearts, but it breaks them open so they can fit the entire universe in.

Fran then read a beautiful life-affirming poem, after which we replied “May It Continue!” which I will try and post here.

The last activity was one in groups of four, a new practice she calls “Corbett”, not after 1970s TV funnyman Ronnie Corbett, but after the town in Columbia where the practice evolved. We took it in turns to think of one project we want to do when we get home from this event. We had 2 minutes to talk about that and to introduce it. Then the first person had 2 minutes to be the voice of doubt, to pick apart our proposal and question it. The second person was the voice of the Ancestors, giving their views on our proposal, and the final one gave the view of the future beings. Then we gave a second response having heard all that.

The session finished with a song and then with an Israeli dance of thanks to Joanna, Fran and her team.

Joanna’s approach is so compassionate, so urgent, so skilful, and so desperately needed at this time. It is also beautiful to see her and her relationship with Fran, they have been married for so many years, yet remain so tender with each other. Usually in my work, it is about introducing a challenge and then saying to people “but look, we can get through this, and we could emerge into somewhere wonderful”. The immense power and skill of Joanna’s work is in saying ‘let’s go down into this, let’s connect with the pain of our not knowing, and the tools we need to get through this can be found in that exploration.

She is an amazing creator of space, a dazzling storyteller. The Bowl of Tears ritual was one of the most extraordinary rituals I have ever experienced. To take over 200 people through that ritual and for it to have such a deep power is quite something. As I said before, I have waited over 10 years to do this work with Joanna, and it was worth the wait. An extraordinary experience, one for which I am deeply grateful.

Thank you for taking us there with you Rob. Blessings and great love to you.

Wonderful! The “Getting Up Glad” poem must be this one, I think:

The hum of your convening is a new/old, rich and beautiful note in the song of the universe. Thanks for helping us hear it!

Thank you for a truly uplifting reflection on the ‘Seeing with new eyes’ afternoon – a real inspiration.