The final day began with rain driving on the bedroom window. This extraordinary week at Findhorn had offered us a year’s worth of weather in one week. Snow, sleet, an odd kind of snow I’ve never seen before that looked more like polystyrene pellets than actual snow and that actually bounced when it hit the ground, sun warm enough for people to lie on the grass to soak it up, hard frost, strong chill winds and now, driving rain.

After doing our packing, it was off to the Universal Hall for Richard Heinberg’s talk, ‘Resilient Communities. Paths for Powering down; an exercise in strategic thinking’. Once again the Findhorn blogger has done a wonderful job of creating an accurate record of this, so I will instead offer my reflections.

His talk was underpinned by 8 assumptions. The first was that global oil production are nearing an all time maximum and will begin to decline within the next 18-24 months, with gas and coal peaks not far behind. The second was that the consequences, as identified in the Hirsch Report, will be severe.

Assumption 3 is that there will be no technofix, no silver bullet that will mean that business as usual can continue. Therefore, Assumption 4 continues, we will have to power down. Assumption 5 was that in the meantime, climate change poses thorny policy challenges where everyone wants to be seen to be doing the right thing, but enormous economic interests stand in the way of enforcing effective global agreements, which without China and the US will be ineffective.

His sixth assumption is that Climate Change makes global Powerdown necessary, whereas Peak Oil means it is not only possible but unavoidable. The seventh is that the powering-down process will be complex, lengthy, and perilous, and his final assumption was that these are not the only looming crises –nor even necessarily the most imminent. It may well be that a financial crash, already beginning, will affect us first.

He gave an overview of the emerging responses, the bottom up approaches such as Transition Initiatives, Relocalisation Outposts, and so on, and of the top down responses, such as Post Carbon cities and local government plans such as the Oakland Peak Oil Task force, of which he is a member.

Richard then unveiled a concept which he has been evolving and of which this was the first public airing. He calls it the Resilient Communities Action Plan (a careful assembly of those 4 letters that could so easily have gone horribly wrong). The idea is that it is something that is a companion to the Energy Descent Action Plan, but it is different, it is, in effect, an emergency response plan, a Plan C to the EDAP’s Plan B. It would be created by a working group within a Transition Initiative or a Post Carbon group, and would sit alongside the main plan as an emergency response that could be taken off the shelf when required.

While crisis can equal opportunity, he argued, it may not necessarily yield the kind of opportunity we are talking about here. In the past, crises have produced Hitler, and the kind of insidious undermining of economies that Naomi Klein set out in her (enormous) book Shock Doctrine.

This plan would involve many of those who have relevant knowledge and would be made very visible to the community at large. He unveiled, with a tip of the hat to the 12 Steps of Transition, his 10 Steps to a Resilient Community. They were;

Most response groups, he argued, cultivate an upbeat, hopeful tone, which is essential. In contrast, creating this kind of disaster management is a sobering activity–but it is strategically and practically necessary. Somebody’s got to do it!

As with many things that arise from hearing Richard speak, one often needs time to go off and digest these ideas for a while. My initial thought is that this could be possible as a subset of the EDP process, and could be something that could emerge from the material gathered. However, it felt to me, from what Richard said, that it involved the creation of a panel of experts, and that the danger with that approach is that the community feels no sense of involvement in the plan itself.

I can see his argument that, in effect, our Energy Descent Plans need to maximize their resilience as it were, as in they can be as robust in the face of a rapidly onsetting breakdown as in a more gentle transition. My initial sense is that rather than having a separate process, that the creation of an EDP should involve the continual assessment as to how its recommendations would hold up in the face of a sudden shock. I guess that the proof of the pudding will be in the eating, as in in a couple of months when we begin the Totnes EDAP process formally, we will bear that in mind and see how it might fit in. Richard was, as ever, authoritative and passionate, clear and forward thinking. 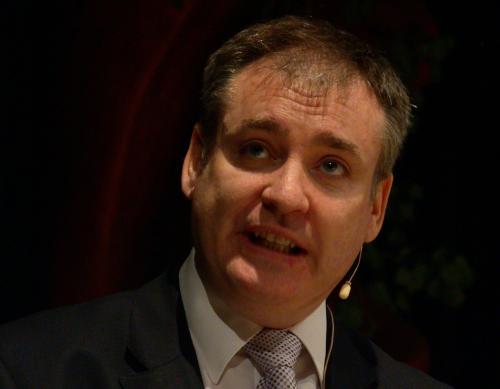 The next speaker was Richard Lochhead, the local MSP (you can read the Findhorn blogger’s version here). He was introduced as a politician who finally was starting to talk the right talk. He announced that ‘sustainable economic growth’ (which by this point in the conference most delegates recognized as an oxymoron) was at the heart of their policy making. They are committing to an 80% reduction in CO2 emissions by 2050 (a 20% improvement on Westminster), and he announced a Climate Change Fund for communities which will give out £17 million over the next 3 years.

He said he was delighted recently to have spoken at the launch of Transition Town Bigga, and is very supportive of Transition Initiatives in Scotland. His dedication to community empowerment, he said, is not just jargon, it is the real thing.

He is aiming (I forget by when) for 50% of energy to be coming from renewable, and that a Scottish renewable energy revolution has more chance of success if it comes from the bottom up rather than top down. His department would be offering £13.5 million for the support of microgeneration, and would make the installation of renewables in schools a priority.

His talk was a mixture of vision and pragmatism. As so often at amazing conferences such as Positive Energy, it is a shame when politicians are just dropped into the event, not having shared the experiences and the learning process that those at the conference have undergone. In questions, he was asked for his view on aviation, which he replied by saying that he was supportive of expansion of air travel, as Scotland was starting from a low base and needed to catch the rest of the UK up a bit.

He was questioned on the term ‘sustainable economic growth’, and replied that if a renewable revolution is to take place, and if that manufacturing is to take place in Scotland, that needs an economy that is growing. Asked how deeply peak oil is reflected in his thinking and policies, he replied that he was aware they still had a lot further to go.

After lunch was a very touching closing ceremony, and then, after a final walk around Findhorn with my camera, supper. Then Rowan and I were off to the station and onto our night sleeper home, a much more restless night’s sleep than on the way up.

Rob
I read Richard Heinberg as portraying this EEDAP (Emergency EDAP) being your ordinary but passionate and committed people inviting experts in a [i]consultant[/i] capacity, which is a very different animal from a “panel of experts” who are in charge.

Richard got a standing ovation for his vision. He gets it from me too. I’ve been developing my own thoughts in a similar way for some time now…

Hi Rob – Heinberg’s ‘Resilient Communities’ idea (expanded further at: http://www.richardheinberg.com/museletter/192) rings very true for me. The pessimist in me has never really felt that Transition processes will have a large enough impact within the required time-scale.

I certainly wouldn’t see Heniberg’s suggestions as a subset of an EDP – it’s a very different piece of work. A piece of work that grumpy old doomers like me would be very interested in doing! So I’d recommend Transition groups keep an eye out for people on the periphery who are interested in, but sceptical of, their local transition work and introduce them to Heinberg’s idea – it might be a good way to get them on board and doing something constructive!

Hi Rob – Tom and I were talking about this over a pint last night and I read the museletter this morning. As Tom touches on above this could be a way of engaging the people of West Cork, both local & “blow in” with a wealth of knowledge in areas such as living off the grid, permaculture, sustainable transport etc. who are watching on the side lines at present.

It could also be a way of engaging more of the of local communities and Towns. As I am sure you are aware here in Ireland, possibly largely due to affluence being a relatively new thing, there is much reluctance to give up the trappings it brings. People will cling onto Business as Usual for as long as possible.

Certainly from our work in Sustain West Cork we have found the locals respond far more to information evenings with titles such as “Saving Energy & Money in the home” than anything with Global Warming, Peak Oil or Save the Planet etc.

I was up at a very successful Convergence where as you know Transition Town’s was on the agenda including Minister John Gormley’s. There was some discussion amongst those of us interested in setting up the National Network Steering Group about how we may need to adapt parts of it to make it work here both in rural & city areas, can you see a place for an adaptation of Heinberg’s idea within the framework of Transition Towns?

Our company is seeing a positive government / private partnership response with our community resiliency technology.

That problem is now being fixed. We hope to work with organizations such as the Post Carbon Institute and Transition Towns as we move this new technology forward.