‘Health and Sustainability’ was a fascinating event, in two parts, which began to explore the implications on healthcare of peak oil and climate change.  The first part was an online webcast held at Plymouth University, where the four speakers gave 10 minute online presentations and then discussed the issues raised online in a chatroom format.  The webcast (I refuse to use the term ‘webinar’ which was used in the publicity!) turned out to be the most popular one that the University has ever run, with about 50 people from around the world, including New Zealand and the US, logging on to take part.  It demonstrated new technology at its best, and offered a tool which could greatly reduce the amount of air travel that is required for communication.

The second part was that evening in the Ship Studio at Dartington, with around 50 people coming along to explore the subject of health and sustainability.  Around a quarter of those attending worked in healthcare although, disappointingly, there were no GPs attending, despite their having been invited.  The evening was hosted by Dr. Janet Richardson of the university of Plymouth and of teh TTT Health and Wellbeing group.  The first speaker was Dr. Robin Stott, a GP and Chairman of the UK Medical Peace and Environment Group. His talk looked at the implications of climate change on our approach to healthcare.  Climate change, he argued, is the most significant public health problem of this century.   The other challenge that sits alongside it is that of global inequity and the lack of social equity.  Climate change, initially at least, will affect the poorer people in the world most gravely. 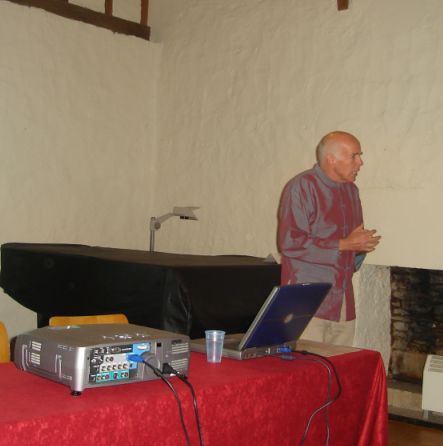 Our responses need to include informing people and organisations, affirming that we need to both put our own houses in order and advocate for global solutions, and identifying frameworks for global agreement.  The model Stott put forward, which will not be new to regular readers of Transition Culture, is Contraction and Convergence.

C&C promotes an equitable global agreement, which would reign in the emissions of more affluent nations while also allowing sustainable development of poorer nations.  It transfers money to poorer nations and creates a policy virtuous cycle which enables economic and social progress within environmental limits.  If brought into operation, he argued, it would unleash a boom in low carbon technologies, and would do much to avert the potential public health catastrophe the potential for which is inherent within the climate change crisis. 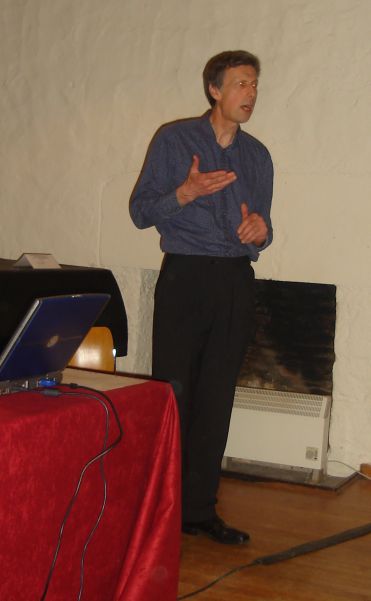 The second speakers was Lindley Owen, Consultant in Public Health for Cornwall and the Isles of Scilly Primary Care Trust.   His talk looked at action in Cornwall on the climate change issue in the healthcare field.  He began with a quote by the editor of ‘The Lancet’, Richard Horten, “in a global context of energy shortage and inequity, the silence of the medical profession would be criminal”.

Public health professionals, he argued, now face the challenge of both keeping people healthy and addressing the impacts of climate change, two issues that are increasingly becoming intertwined.  Many of the choices that people should be making for the sake of their own health and the health of their communities are the same choices that benefit the health of the planet.

In health, he argued, once you prove something, rather than continuing to research it, you are dutyt bound to move on to finding a cure.  Otherwise we would still be researching passive smoking, whereas once it was proved we moved on to tackling it via. public health.  The same is the case with climate change.

Climate change provides a unique opportunity for the public health community to deepen existing partnerships and to create new ones.  He then talked about Groundswell Cornwall, which is acting as a county-wide vehicle for bringing together environmentalists, academics, farmers, academics and health professionals, as well as those from Transition Initiatives across Cornwall.  They have so far produced two excellent reports, one on the impacts of the proposed expansion of Newquay Airport, and the other of the possible impacts of peak oil on Scotland.

So what is the NHS in Cornwall doing?  They have already launched a food programme which is already bringing local and healthier food into Cornwall’s hospitals, they have developed a carbon strategy, they have worked with Sustrans to develop Mobilise!, which is about more active travel, and they have trained a team of Health Trainers, who help people to find non-medical solutions to health problems.

The third presentation was by Dr. Andy Nicholls of University of Plymouth, and was entitled “Bugs, Birds and Bathing”.  In it, he explored how the onset of climate change could affect the spread of zoonotic diseases (i.e. those spread by animals… there’s your word for the day, and a great one in Scrabble, given that it contains a ‘z’).  One that is attracting a certain amount of media attention is the possible spread of malaria to the UK.  Climate change may indeed lead to localised outbreaks, but he didn’t think it would prove to be a major challenge.

One of the interesting things that came out of his talk was the fact that one of the ways by which malaria is spreading around the world is via. the international trade in used tyres. The small amount of water that sits in the tyres is, apparently, the ideal breeding ground for them.  The UK already has over 30 varieties of mosquito.  Recently, a Cornish village experiences a plague of mosquitoes, leading to lots of press coverage and letters to the local press raising concerns about possible outbreaks of malaria.  Some people did become ill and blamed the mosquitoes, although this is very hard to prove.  Whether mosquitoes will become a real pubic health risk remains to be seen, although there are very real population growth issues with some of them.

The other area is around floods and increased rainfall.  Recent flooding in Boscastle in Cornwall was a good example of this.  Another example was an outbreak of 7 cases of e-coli in Cornwall which lead to children being hospitalised.  On further examination it turned out that they had all played in a stream on a beach, and an intense pulse of rain had washed rain from a field of cattle.  What we are starting to see, he argued, is short, sharp pulses of contamination.

The final speaker was me, and I tried to weave the peak oil question into the climate change one.  In the same way that cheap oil has come to underpin all aspects of our lives, it has also come to underin all aspects of our healthcare system, from drugs and equipment, to transportation and machinery.  This is not a good plan, as the energy context in which it sits is changing rapidly.  I gave a short crash course in peak oil and how it links with climate change, and then set out the case for our priorities being the cutting of carbon emissions and the building of resilience.  What would a more resilient healthcare system look like?  It would, I argued, reduce oil vulnerability in all areas, seek out less energy intensive approaches, rethink hospitals as farms or as medicinal plant landscapes and apothecaries, prioritise prevention and health promotion, seek to decentralise its services wherever possible and prioritise local sourcing of food and materials.

I talked about the Transition movement and how it is growing, and then mused on what Transition groups might actually do at the local level to support this, inspired by a presentation given by Pamela Grey at the first Transition Network conference.  They could conduct an audit of all medical resources, both conventional and CAM, identify strengths and gaps, develop healthy living programmes in partnership with others, implement reskilling/retraining projects and develop green herbal medicines as an alternative to pharmaceutical.  I concluded that the medical system can see peak oil as a huge crisis and challenge, or it could embrace its possibilities and potential, which could lead to an extraordinary rethink, which would unleash all kinds of innovative approaches and initiatives.

A lively discussion then followed, raising lots of issues on all aspects of healthcare.  It is hoped that the evening will reinvigorate the TTT Health and Wellbeing group, and lead to a deeper exploration of these issues.

Deepest thanks to for their support.

Interesting topic and one that goes largely unaddressed in discussions on PO/Climate – with the exception of Greer, who has a good post on that theme here.

The research, production and distribution of most pharmaceuticals is hugely energy intensive, not to mention polluting to manufacture and polluting when they pass from people into the sewage system and sea. The over-reliance on pharmaceuticals is one side-effect which may well disappear in any energy descent scenario.

The good news is that strong communities and greater social interaction make for far healthier populations with far lower incidences of heart disease and other major causes of death as wartime Britain and the Roseto Effect show. The need for energy-intensive medical practices may diminish with closer community ties.

Although this will be controversial to some of today’s doctors and rationalist sceptics the “big five” of Herbalism, Acupuncture, Homeopathy, Osteopathy and Chiropractic are well placed to provide a sustainable alternative in the transition to a lower energy future.

Thanks for all this info, Rob and Mark. I especially appreciate the bit about the Roseto Effect.

I also wanted to share that there is a similar-ish free online conference happening Thursday, April 10 from 11am – 4pm Eastern US time. It’s called Converging Environmental Crises and is a teach-in on energy, climate change, water, agriculture and population put on by the Ohio State University College of Public Health.