The final day started with the final session of workshops. There were sessions on funding, ESCOs, transport, training, avoiding burnout and Transition Universities. I co-presented one with Adrienne Campbell from Transition Town Lewes, sharing our experiences so far with developing Energy Descent Pathways. It was a very useful look at how the thinking is going on this process which is a key aspect of the work of Transition Initiatives. It also included a very powerful activity led by Adrienne, which was used to help people develop a sense of what visioning is. 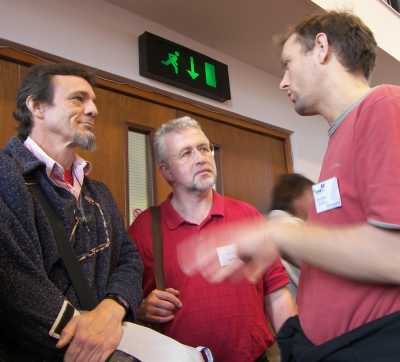 This was followed by a session called “Where Do We Go From Here”, where people were invited to talk about what they planned to do with what they had absorbed/learnt/discovered during the conference. When asked what one thing people would do when they got home, one woman very proudly stood up and said that she had done one of the Open Space workshops on public speaking (to a great cheer), and that she was going to do a talk to her local Mothers Union, Women’s Institute and church group, but on deeper reflection thought why not do talks to those groups county wide, indeed why not nationwide?

A succession of people discussed how they were going to take the ideas they had gathered home with them, many of which had emerged from connections they had made over the 3 days. After a tea break it was time for the final feedback session, which was more a look at ‘how was the conference for you?’ This gave a deep insight into how people found the event, the most criticism being proceeded by “this has been an amazing event and this is only a minor grumble but…”. In the main, the feedback was very positive, and attested to how the self-organising format of the conference had been successful and empowering for people.

At the very end, I gave a closing address, which I will post here separately, in the post above this one. Then the event closed with all 200 of us going out into the sunshine to do, in the time-honoured Transition conference way, a huge ‘whoosh’, which you can see below, with thanks to Mike Grenville for both filming it and posting it online…

Then everyone was off again to the four directions, re-energised and re-inspired, to deepen and grow their Transition work. Thank you so much to everyone who helped to make it happen, especially the good folks of the Royal Agricultural College, who were just amazing, and to everyone who cycled to the conference.

“Where Do We Go From Here” was so inspiring for me. Looking around and seeing hundreds of wonderful people animatedly describing the plans they are going to take forward. There was a real sense of the event rippling outwards to change the world.

I still think “Conference” is a very un-Transition word though – surely we can think of one better? 🙂