My Closing Address to the 2008 Transition Network Conference

At the end of the Transition Network conference, I was asked to give a closing address to pull the strands of the weekend together. Adrienne Campbell very kindly typed it up, and so here it is, and thanks again to Mike Grenville for the photos.

Last year when we met at Nailsworth, we were coming together to say, “hey isn’t it great, this thing that we’re doing… what ever it is”, we were very much forming. This event has a much stronger idea of what we’re doing, where we’re going and has been starting to look at putting the next steps in place for how we continue.

Any gathering like this can only scratch the surface but at the same time it can go very, very deep. It scratched the surface in that we had 30 workshops to choose from and only managed to go to three, and out of the many, many Open Space sessions only a few of them were able to benefit from your knowledge, from the brilliance that you brought along to this event. Yet it’s been deep in that we’ve learned together, shared ideas and inspiration, played football, eaten and drunk together, sung together and sat in silence together, so it’s been a deep experience for us too.

Although the film (The Age of Stupid) was an intense experience for some people, what I often like to think of is a famous Buddhist text called A Guide to the Bodhisattva’s Way of Life by Shantideva, which is all about living your life as a service to others. One of the really beautiful analogies in it is about peacocks who live in a grove of poisonous trees that drop poisonous berries, but these peacocks are able to eat the berries and transform them into really beautiful plumage and feathers.

I think in a sense that one of the things that is quite distinctive to the Transition movement is that we are able to take these twin issues of peak oil and climate change, and instead of them being something that weighs us down, we are actually able to turn them into something else, to transmute them.

I was at Findhorn recently, and Joanna Macy was speaking there. A few people have mentioned Joanna Macy this weekend and I had waited 10 years to do a workshop with her. It was really quite extraordinary. The thing that she kept coming back to all the time was motivation and intention, that what we actually do is really quite secondary, it’s the motivation and intention that we do them with that matters the most.

I think that people will write songs about what we’ve done here this weekend. They’ll probably be terrible songs, but they’ll be sung with great gusto! People will tell stories about the brave and brilliant people here and the amazing things they went off and did afterwards when they got home.

The times we are heading into are times that will throw a lot of things at us. People have talked about the backlashes and the fear, the grief that we will encounter. We will also have to meet our own fear as we do this work. I love this quote, that I put in the back of the conference booklet, by Ambrose Redmoon;

“Courage is not the absence of fear, but rather the judgment that something else is more important than one’s fear. The timid presume it is the lack of fear that allows the brave to act when the timid do not. But to take action when one is not afraid is easy. To refrain when afraid is also easy. To take action regardless of fear is brave.” 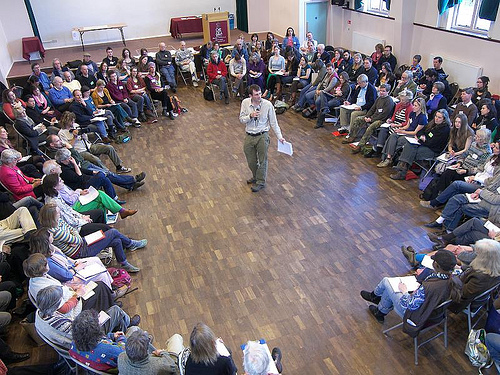 It feels to me that if, as we go away from here, we can keep that intention and that motivation really pure and remember that we don’t do this work for ourselves, but that we do it for the people who come after us, then that’s what we need to keep coming back to when we need to fire ourselves up and re-energise ourselves as we do this work.

This is a time when everything is up for grabs. We’re coming into a time when climate change and peak oil are such clear problems, along with all the other converging problems that people have mentioned. So what are the strategies that the government of this country have put forward? They propose that we’ll build 23 new nuclear power stations, we’ll build a new runway at Heathrow Airport, we’ll take the tops off mountains at Merthyr Tydfyll and start open cast coal mining again, and we’ll build biofuel refineries on the coast. All of which are such a complete non-response.

Actually the projects and initiatives that you generate in your towns and your communities and in your Energy Descent Plans are asking the real questions and coming up with the real answers, it is the real work that needs to be done. You’re coming up with answers that actually work and are on a scale with what we’re looking at. You’re producing solutions, not a shopping list for suicide (applause). These are extraordinary times that require extraordinary people, and that is who you are, and that is what you’re doing. It has been a real honour to spend this time around you all.

In Open Space, we talk about Whoever Comes are the Right People, Whatever Happens is the Only Thing that Could Have Happened, When it Starts It’s Time to Start, and so on. That’s what underpins all of this, so it’s really lovely when it comes together at events like this. 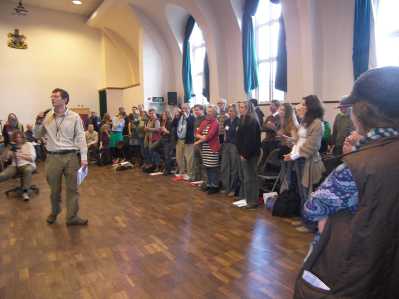 I really struggle sometimes to imagine how enormous this could all become. Sometimes I’m sat with Ben and some email comes into him and he just says ‘Jesus! Such and such has just happened’, and we just sit and go ‘wow’ for a while. As this goes on we have these moments where we go ‘wow’ and sit and look stunned more and more. This is all speeding up, because these times are speeding up and where all of this can go is beyond our imagination. At the end of the day, given all that you know, and all that you’ve done so far, what else would you want to do?

Thank you all so much for coming, all power to your collective elbows and see you next year.

I’ve felt so good since returning. I felt different on the train coming home – I was talking to people on the train, offering to carry luggage and just generally with my heart feeling very open to other people. I’m a friendly and open guy normally but this felt as though it was coming from a much deeper place than just ‘being polite and helpful’.

Thanks to all of you for creating something so empowering.

Stephen, I know exactly what you mean. It was strange to be back among people who look at you a little suspiciously when you smile at them!

Still, here’s to the day (whooshing towards us) when there are just a few Misery Conferences dotted about in the midst of a Transitioning world!

Wish I’d been there…