« ‘The Art of Retrofitting’; a tour of 3 very different Totnes homes in need of retrofitting
Signing off for the summer…. »

Run of the Mill magazine is produced by the Ruskin Mill Educational Trust at Nailsworth, the beautiful venue that hosted the first Transition convergence in 2007. Their latest edition includes an interview with Mike Jones of Transition Stroud, which gives a rich overview of how Transition Stroud began and what it has been up to. Many thanks to the editor for permission to reproduce the article here.

I first became aware of the Transition initiative via a conversation at Schumacher College with Brian Goodwin, a tutor on their deep ecology programmes. He mentioned the work of Rob Hopkins, now living in Totnes, who had previously helped establish a new full-time permaculture course in Kinsale, Ireland. On the opening day of this new course, Rob decided to begin by showing the film ‘End of Suburbia’, which explores the dramatic impact that the end of cheap oil is likely to have on suburban America. The afternoon was then taken up with a talk by Colin Campbell, a retired petrochemical expert, who presented the facts and figures on Peak Oil thereby revealing the kind of potential low-energy future we might expect as oil and gas are no longer able to match demand. The day was somewhat daunting for the students and challenged their thinking as to what might be needed in a future low-carbon economy. They started to look at how one might respond at a local level and began to imagine the necessary steps required to ensure that the adjustment was made in such a way as to ensure a ‘soft landing’. They developed an Energy Descent Action Plan (EDAP) as part of a wider project and worked with the local community in beginning to consider which aspects of life might be substantially impacted by Peak Oil. This project formed the core of what has since become more widely referred to as the Transition Movement. 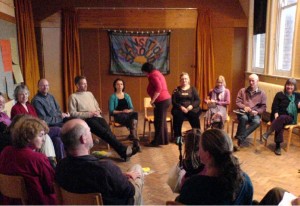 Fundamental to the Transition process is the decentralisation of economic power and the building up of a more localised economy. This goes very much in the opposite direction to the current trend, globalisation. An example of such a transition occurred in Cuba with the collapse of the Soviet Union resulting in the cutting off of nearly all oil imports. Almost overnight, the country faced a dramatic crisis and a very real threat to its survival. Apart from the power black-outs, the most immediate challenge was food shortages. People had to start growing their own food and a whole new form of urban gardening sprang up, mainly based upon organic, permaculture principles. Farming rapidly became an important vocation again and Cuba is now largely self-sufficient in food, with 10% of the population involved in food production. For those interested in knowing more about Cuba’s story, there is a DVD called The Power Of Community .

In Stroud, Dave Judd got to hear of Transition Towns and phoned around to see if there was any interest from others. A few of us met at his house and decided that we should set up Transition Stroud. That was about eighteen months ago and the process has grown from there. I had also been involved with another group of people focusing on the work of Joanna Macey, a Buddhist ecologist campaigner. She had a run a three-day workshop a couple of years previously at Hawkwood College, during which she emphasised the importance of people reconnecting with the earth and nature, and the valuing of indigenous wisdom. She talked about the need for three particular, and interrelated, types of activity:

The Transition process responds to all three, and is a proactive response to building resilience at a local level. It places a focus on everyday issues such as food, energy, transport, health and education.

Following the first Transition Stroud meeting a monthly forum formed and a number of working groups were established, with individuals volunteering to act as coordinators. We also made the decision to have a big public event focusing on Peak Oil, and invited Richard Heinberg to speak.

The event, in May 2007, was a real success and demonstrated the genuine interest that many people have in what we might achieve at a local level. In addition, there were already a huge number of existing projects and initiatives linked to sustainability – ‘Transition Stroud’ is able to provide a unifying agenda which helps link together what might otherwise be disparate and diverse interests.

The structure of Transition Stroud is a bottom-up, community led, self-organising process. There is no blueprint that we are following, but rather making it up as we travel. It is about stepping into an unknowable future in a spirit of collaboration, experimentation and fun with a collective intent to engage what is already working and support that which needs developing.

By its very nature it is at times chaotic, inefficient and frustrating, but nevertheless provides some sort of infrastructure for people to step into with their own ideas and projects and shape them in whatever way is appropriate for them. Rather than having a formal structure with a small group providing the overall leadership, there are instead a large number of working groups of varying sizes, together with a monthly open meeting where decisions can be made by whoever turns up. The idea is that people gravitate to whatever they have real energy for, meaning that some people will belong to several working groups, whilst others might form their own new sub-group.

The challenges that are faced, in respect of peak oil and climate change, are enormous. With food, for example, the starting point is to build greater resilience and self-sufficiency at a local level, whilst also promoting jobs in the field and reconnecting people to the land. Already we can see the effects of the price of oil going above $130 per barrel both in the rising costs of food and in global food shortages; a problem that is compounded by the switch to biofuels. Currently, the food business is heavily exposed to the availability and cost of oil through the agri-chemical business and the processing, storing and transporting of food products around the world. In a low-carbon economy, we need a localised system centred on a seasonal and organically-produced approach, rather than being overly-reliant on oil-intensive production methods, with their associated global supply-chains and just-in-time centralised distribution systems.

Transition Stroud is also looking at how we might generate energy at a local level, what forms it can take and what we can do to reduce our energy needs and be more energy efficient. Stroud used to be an economic hub, with a prosperous woollen industry powered largely by water. It was a model of sustainability and perhaps one we’ll be able to reclaim. Energy is clearly going to be a complex matter and requires engagement with both the local authorities and generating companies. It also offers us the opportunity to look at community-based ownership models, some of which might potentially link into a local currency scheme or time-bank system. The way forward is one of experimentation, innovative partnerships, new business models and a greater focus on incentivising the right things.

A challenge we face going forward is finding ways for people to create livelihoods during this transition to a low-carbon economy. This is necessary in order that local enterprise can be sustainable, both in the short to medium term and be supported in a way which builds momentum for a bigger shift over time. Local economic vibrancy and enterprise is going to be essential. Rather than trying to operate in isolation, Transition Stroud needs instead to find creative ways of engaging with local government (and others) so that we might work together in responding meaningfully to what are enormous challenges. One initiative already underway has been the setting up of a Task Force, in partnership with Stroud District Council, looking at the local impact of Peak Oil and Climate Change in respect to transport, energy and land-use, and feeding ideas directly into the Local Strategic Partnership (LSP).

The intention is to promote local initiatives and shape different ways of thinking around the challenges and opportunities we are facing, and to create a policy framework which will serve us well for the next 10-20 years. This very much follows the pattern used by the City of Portland in Oregon – their Peak Oil Task Force produced a comprehensive report calling for bold action and radical thinking:

Although the challenges are daunting, Transition Stroud is also about promoting a positive message – that a more localised pattern of living can be achieved which will be more equitable, healthier, sustainable and with stronger communities and improved well-being. It is about having fun, strengthening relationships and building on what we already do well. By working together and sharing responsibility for creating a resilient community, the hope is that we can create the energy and excitement through which significant breakthroughs will come.

“…localisation stands, at best, at the limits of practical possibility, but it has the decisive argument in its favour that there will be no alternative”

For more information visit Transition Stroud’s website and you can also keep up with developments there via. their excellent blog.