« The 2030 School Reunion: a powerful tool for visualising the future
The Transition Movie: an Update from Emma Goude »

We had the pleasure recently of having Roberto Perez, he of ‘The Power of Community’ fame, in Totnes recently to give a talk, imaginatively entitled, erm, ‘The Power of Community’.  He was quite brilliant, painting a powerful picture of how Cuba responded to its own peak oil experience.  Thanks to Carl Munson at Traydio.com, you can now hear both his talk and also a rather rousing bit he came out with at the end of the Q&A after the talk.  Our deepest thanks to Roberto for his time here.  I had a very pleasant early morning stroll around the Agroforestry Research Trust’s forest garden with him before he headed off to his next talk, in Birmingham.  Here is Nicky Scott from Chagford’s write-up of Roberto’s talk;

“People all over the world are starting to wake up!”

these words were ringing in my ears as I walked away from Roberto Perez’s talk in Totnes about how Cuba had managed to feed it’s entire population using mostly organic and permaculture methods. I had Steve Bell like visions in my head of people coming out of their zombie state and their eyes opening to the reality of a world where until very recently a £100 worth of capital could get you £8,000 worth of credit (I don’t know maybe you still can?) where we need 3 planets each to keep up with our consumer lifestyles. 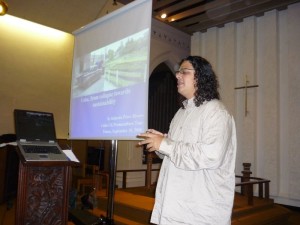 Cuba had to find out the hard way.  When the Soviet Union collapsed, virtually all imports, into Cuba ceased. Any ships landing in Cuba were barred from USA ports for 6 months (first offence and a year 2nd offence.) Cuba had the most industrialised agriculture in Central America based on the old plantation crops of tobacco, coffee and sugar – all good nourishing crops! The land which had been cleared of forest was first given to the rich elite and later mostly appropriated by the state. This land is now being massively reforested and much of it returned to grow food crops. All the previous cash crops were heavily reliant on fuel, pesticides and chemical fertilisers – this was reduced at least tenfold virtually overnight.

Now Cuba had to come away from the cloud cuckoo land existence based on finite supplies of cheap oil and the chemical pesticides and fertilisers manufactured using oil. They entered a ‘Special period’ (we might call it a transition period) much like this country was faced when we went into World War 2. Food had to be carefully rationed and apportioned. Nutritionists worked out minimum daily requirements of food; every scrap of land was brought into cultivation.  All this and much more happened in World War 2 here – the dig for victory campaign, the creative use of food, the utilisation of wild foods. Many of us have heard or experienced directly the stories of rationing during the war and try to imagine what it must have been like to have only 4oz of butter each a week 4ozs of bacon, 3.5 ozs of cooked bacon or ham, 12ozs of sugar and 2 eggs. (I wonder what happened to the vegans?) Of course people started to grow their own food and collect from the natural environment.

In Cuba most people were living in an urban environment, in Havana today every spare scrap of land is a garden, roof tops, window boxes, demolition sites, everywhere there is food being grown and of course the transportation to the market is often measured in feet (well, metres I suppose)

Most people in Cuba were not at all used to growing food – they were basically plantation workers growing all those cash crops. They had to change everything it is a learning experience which is still continuing and they are still faced with enormous challenges.  They are still embargoed by the USA and that continues to make life extremely difficult for them as ideally they would trade in their ‘bio-region’ to exchange food that they cannot grow – potatoes, apples and other cooler climate crops. They have had to learn how to plough with oxen once more as tractor fuel is not only expensive but the tractors have compacted the soils so badly that many of them have to be painstakingly reconstructed by careful use of composts and worm casts.

But this is more like the world will have to be – the real world, not squandering it’s natural resources but using them carefully – not reliant on high tech fixes but using the technology where appropriate; a careful mixture of the old with the new. A photo voltaic system can power a radio, some lights maybe a small TV but not a plasma screen. Communities are more localised – Cuba now has 54 universities and the health system to rival anywhere in the world, without all the access to modern medicines – instead they grow their own medicinal plants and doctors have been trained by local healers.

Roberto said that the signs were promising – people all over the world are waking up and finding themselves in cloud cuckoo land and with the financial world being finally exposed for the house of cards that it is now is the time for us to start a compost heap, to pick up a hoe and start to cultivate some land; and this is the perfect time to start.  I always think that September – October is the time to start you growing year. Get your garlic planted, plan for those broad beans to over winter, and look at sowing all kinds of oriental salad crops, autumn onions. Get you ground covered and growing for the winter and then the spring start will just be a natural continuation.  Are we the ones in cloud cuckoo land? I don’t think so!

I loved “The Power of Community”, but there’s one major problem with the concept–not with Cuba, but with its usefulness as a model elsewhere.

Cuba is a perfect subtropical climate. It’s about 70 degrees (F) all year long, and never varies more than 10 degrees (F) in either direction. There is a rainy season and a dry season, but it’s also very sunny. The upshot: you can grow vegetables all year long in Cuba, one crop after another.

That’s not how it works in a temperate zone like the northeast of US (where I am) or the UK or most of Europe. At best, I have about three months in the summer to grow whatever food I can. I plant in late May, harvest in late August. For the rest of the year, I have to freeze or can whatever I’ve grown and buy food in the market. That’s if my garden is not hit with torrential rains or searing heat. Then I may end up with nothing.

We need a model for food production that works in temperate zones. I was hoping the TT movement would be the leader in educating people on food production within our climate zone.