The Power of Videoconferencing, and an Unusual Transition Film from Estonia 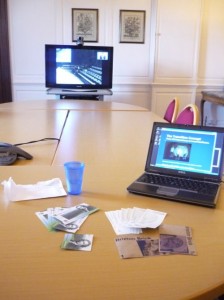 Here is what the event looked like to me, sat in the video conference room in Dartington.

As regular readers will know, I gave up flying a couple of years ago, and so when invited to speak at events outside the UK, I am drawn to the potential of the communications technology we now have at our disposal to obviate our need to travel at all. When I was asked to be part of the ‘Life After Capitalism’ series of lectures at the Von Krahl Theatre in Tallinn in Estonia, which brought together activists and artists, I discovered the most wonderful technology, video conferencing, thanks to the facilities at nearby Dartington.

It’s impressive stuff. As you can see in the film below, I could see them, they could see me, I could move my powerpoint in the hall in Estonia backwards and forwards from a laptop in Dartington, it was all very effective.  It is different from normal speaking as it is harder to get a sense at an early stage whether everyone is on the edge of their seats, gently snoozing or snorting derisorily, but the fact that you can see the audience allows you to get some sense of that.

The series went on to feature speakers such as Mark Lynas, Jonathan Dawson and others, and, as I understand went down very well. The talks were part of a larger event which featured lots of art, dance, music and performance, elements of which are woven into the film below.  I especially like the bit where I am talking about Alberta tar sands from an advertising panel on a bus stop, while no-one nearby pays the slightest bit of notice!

It is not every day that I give a talk which ends up being presented in such an usual way, with artistic interludes, people painting their feet blue and dropping paint onto overhead projectors…. see what you think.  Thanks to the organisers, particularly Elo-Liis, Henri and Marko, and to Tom at Dartington for the wonderful technical support.  I recently did something similar via. Skype to New Zealand, and worked out that I had saved over 9 times my bodyweight in aviation fuel by staying at home, so this way of presenting will inevitably become more of a fact of life (blue feet optional).

A very good talk by Rob with some curious creative insertions.

I found the video fascinating – the production values were really high! At first the interludes irritated me, but then I actually looked forward to the next one. In the end I enjoyed the whole thing!

Shame there weren’t more people in the audience as it’s clear a lot of trouble and organisation went into the whole event.

It’s not realy a shame the (physical) audience was small because many more can watch online…!

“because many more can watch online…!” – I agree entirely that the beauty of the recording is that I can watch it, many hundreds of miles away, as can many more people than could ever have attended the event.

Nevertheless, it just seemed a shame that there weren’t more people at/near the location who attended given the fabulousness (is that a word?) of the whole thing!