Oh For Heaven’s Sake. Can We Get a Move On With Those New Cultural Stories Please?

As I mentioned yesterday, I was in London over the weekend, and my post Sigur Ros wanderings around that great city were fascinating and occasionally bewildering.  The recent to-and-fro with John Michael Greer and the editing work I am doing on the impending Transition Timeline report have really got me thinking about stories, the cultural stories we tell ourselves at this time of monumental change and how woefully inadequate most of them are.

Albert Bates has written brilliantly of how perhaps the closest we have in popular culture to an engaging depiction of the post oil world is, in fact, the film “Wallace and Gromit and the Curse of the WereRabbit”, with their energy efficient terrace housing form of urban design, their low car numbers, their very strong local food culture, and their great use of appropriate technology.

Beyond that though, we struggle as a culture to find any stories other than our default ones.  Our main ones are the Business-as-Usual story, where everything carries on the same year after year, just with more of everything, the Collapse story, where we wake up one morning and the world has morphed into Mad Max and we eye each other more as potential meals than next door neighbours, or what David Holmgren calls ‘Techno Explosion’, where we can pop to the Moon for breakfast and the traffic looks like that scene in Star Wars where Anakin and Obi Wan are chasing the assassin and Anakin jumps out of the flying car thing in the multi-level high speed traffic.

What we don’t have, and what we desperately need, are the stories about the culture that looked peak oil and climate change square in the face and unleashed its creative genius to fashion a dynamic and successful way through.  Struck me, as I wandered around London, that some of the messages that popular culture is throwing at people these days as they go about their business are about as far from that as it is possible to get, and are indeed decidedly unhelpful. 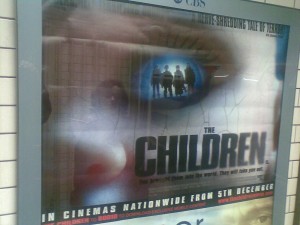 The first one was posters for a film which you see again and again on the Underground nowadays, called ‘The Children’.  Sounds nice doesn’t it?  Oh dear no; on closer inspection, the poster reveals something so appalling and inappropriate as to almost defy belief.  The tag line is amazing, “you brought them into the world.  They will take you out”.

I have to say, as a generation of young people struggle to become Obama’s “young people who rejected the myth of their generation’s apathy”, and to make sense of the rapidly changing world around them where nothing is as they expected it would be, and as the adults around them try to figure out how to inspire, enthuse, reskill and engage them in the great work of the next 20 years, this kind of message is singularly unhelpful (plus it looks like a completely crap film). 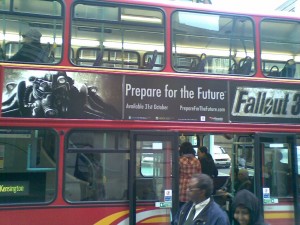 The second one was an advert I saw plastered on buses all over London, for a new PS3 game called ‘Fallout 3’.  Now, we have already established, courtesy of my piece about Guitar Hero 3, and the comments that came in about it, that I am an old fart who doesn’t play computer games.

What I am writing about here though isn’t the game itself, which I haven’t seen and therefore have no opinion of, rather the advert.  ‘Prepare for the Future’ it screams.  As someone walking along the street minding my own business whose attention was grabbed by the advert, the eye is first drawn to the ‘Prepare for the Future’ bit, which then sets the mind wondering ‘what future?’  Then check out the graphic that accompanies the title.  Some hulking great mutoid guy, completely dressed up in some kind of radiation suit (due to the ‘Fallout’, I imagine), living in some kind of post-apocalyptic world.  The Future?  Not much market gardening going on in this particular vision of the future.  I’m sure the game doesn’t contain a level which involves pricking out chard seedlings and swapping chutney-making tips with the neighbours.

So anyway, as a small attempt to counter this absurd but increasingly pervasive nonsense, here’s my small contribution, some absurd nonsense of my own.  It is a Transition Tale I wrote recently, and it made me giggle for most of the day…. but who knows… perhaps it may come to pass…. 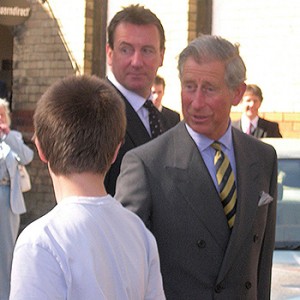 “Prince Charles yesterday opened the new Sunderland Tate Gallery, having travelled to the city on the “M1 Rocket”, the coach system introduced so successfully last year, where on lane of the motorway is now dedicated exclusively to coach travel.

He arrived looking refreshed and rested, where he was greeted by hundreds of well-wishers. The Prince, who last year gave up travel by helicopter and aeroplane, has taken his role of “Post-Oil Royal” very seriously.

He was delighted with the new Tate, a zero-carbon building which spots a glazed market garden on its roof. Museum curator Jasmine McIntyre, conducted the Prince’s tour of both the gallery and the garden, which supplies much fresh produce to the surrounding community. “He was thrilled by the depth of creativity the Tate embodies on all levels” she said.

The Prince denied that, ultimately, he had found the garden more interesting than the art, although onlookers said that he had appeared less than impressed with Damien Hurst’s piece, “Scrotum Pole”, which takes up much of the main gallery.

It was a spectacular sight to witness president Obama and the president of Iran – Mahmoud Ahmadinejad, riding together on bicycles at the opening of the new bicycle lanes in Teheran. During the 2-year program called “no-nukes for bikes” US government has shipped to Iran some 4 millions mountain bicycles and helped with the construction of bicycle lanes in 16 major cities.

“We have reached a consensus” said president Obama, “We shall develop a new step-through frame and it will be produced right here, in Teheran. These handle bars could be a little bit longer as well.”

“We are very interested in carbon fibre technology” said president Ahmadinejad, “but we are increalisingly aware that these energy intensive frames will have to be replaced by more environmentally benign technologies. We had a good conversation on bamboo frames…”

Two presidents will meet tommorow for a lunch to discuss their exepriences in bike-sharing programs they have initiated in capitol cities. “Parking stations for bicycles in Washington are getting crowded” says Mr. Obama, “When I announced two years ago the plan to strenghen US economy by localizing transport, I never expected this kind of overwhelming response. We need not only smaller cars, but also smaller bikes. I like this cute red folding bicycle that Hilary has.”

Hey its not all bad Rob, there has been that highly popular series of films about reskilling in the arts of carpentry and self-building called ‘Saw’. There’s even been three sequels. Well I assume from the title that is what the film is about… 😉

I loved both Rob’s and Marcin’s pieces. Haven’t written mine yet, but I have some ideas! Hm, do I sense a book in the making? I don’t see why it couldn’t be as popular as all those doom-and gloom books.

Meanwhile, just in case your latest input of insanity from walking around London isn’t sufficient, here is a link to Dave Barry’s latest column, with the Gift Guide featuring this year’s crop of incredibly useless gadgets (go to the box at the end of the article).

Whoops, I forgot to add the link:

Rob Hopkins is whistling for a wind to power the wind-generator linked to the photo-copying machine that prints Totnes Pounds. “On good days we can print hundreds,” he said. “Since the collapse of the sterling and the dollar, the only currency people have faith in these days in our Pounds, and they pay for them with veggies. A few more days like this and we’ll be all set for winter.”

In the local school playground, kids on the see-saws were bouncing up and down to the encouragement of their teachers. Each see-saw is connected to a pump and a turbine that produces electricity too. “If there’s no wind, we get the kids on the see-saws, and that powers the school” said the headmaster. “The kids get fit and get an education. What could be better?”

Property prices are up in Totness, as many see it as a good place to stay next winter. However, your straw bale house with attached chicken shed will set you back a whole field of produce. Good luck!

There’s “Gears of War II” as well. I do wonder what impact dystopian games like these have on people’s ability to vision positively.

Killer children? I wonder where that idea came from… 😉

Is anyone watching Survivors on the BBC? Its flu and not oil but the device lands 5% of the worlds population in a future where the big (maybe trite) questions come up through the interaction of the different characters as they try to cope with their new world. Are basically good or bad; can we survive as individuals or are we social; is it going to be a gun fight for the dwindling left-overs of the industrial age or can reason overcome?

Its clunky, but people round the office are talking about it, much like we did at school with the original way back in the 70s following oil shocks, financial melt down etc. Our school age children are getting into the discussion. And its a great opportunity to ask: what if it was oil that went – what skills do you have? what would you do?

Utopian narrative is pretty thin on the ground (I quite liked More’s Utopia and Wells’ Men Like Gods.) and only becomes really interesting when there is something nasty and paradoxical lurking beneath the placid surface. Dystopian stuff, dwelling on the darkside is appealling and scary can be good, people aren’t muppets, 99.9% of people get it, they suspend dis-belief and go along with the ride. But dystopian stuff can also ask the questions.

Corinne – The Zombie Yard Sculpture looks like a must for any self-respecting permaculture plot!!

As is my style, here are some nice links 🙂

And did you see this?

Also, check out my youtube subscription for lots of good vids:

I saw Iron Man the other day and couldn’t help notice the technofix transfixion that seems present everywhere these days – this was one of the highly anticipated films of the year and it portrayed how a man overcame the bad guys (sneering Muslims in the Middle East with AK47’s) with the aid of hightech computers and weapons (which he built in his basement along with some sort of free-energy generator).

Fortunately, we don’t have to look too far to find new cultural stories to help us prepare for the future. Many of them already exist… A couple of days after watching Iron Man, I watched Rambo First Blood. In it, I saw John Rambo take out a helicopter with just a rock and overcome an entire fanatical, conservative, hicktown police force with just a knife (albeit a fairly large, sharp knife) and whatever natural resources the local forest had to offer. And not only that, but in a later episode I watched him single-handedly liberate the native people of Afghanistan from a foreign, occupying army.

One man can make a difference.

The Revolution Will Not Be Televised
http://uniteddiversity.com/the-revolution-will-not-be-televised/