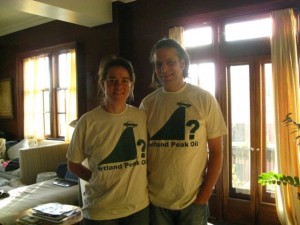 We landed in Vancouver in pouring rain, reflecting on the new meanness of air carriers, having been transported from New York to the west coast in a journey of 6 hours starting at 7am with nothing but poor bagels you have to pay for as breakfast. A wonderful sign of the effects of oil prices, and a bit hard on the stomach. The bus and ferry ride over to Victoria Island were grey, still, foggy. We got one view of the snowy mountains by Seattle from the southern coast before the mist settled in, to remain for the duration despite promises that bad weather never lasts.

The most striking thing about our training venue at the university was the abundance of bunny rabbits on the grass – grey, brown, black, white, very tame, and nonchalant. I was recovering from a transatlantic cold, with that slightly out of body muzzy feeling, and walking from the car to the training room across lawns that were spotted all over with the little living lawn mowers I felt a bit like we’d taken our training into Alice’s wonderland, and wondered if we’d meet the March Hare and the Queen of Hearts (off with her head!!). We suggested they’d be a nice piece of protein resilience, our hosts thought there would be a public outcry if anyone tried to cook one up.

The training group was more sensible. Jamie opened with a traditional welcome from the First Nations people of the area. Down by the harbour and along the walk out toward the point, the entrance to this beautiful port, were markers. These markers marked the settlements and resources of the Coast Saltash, Songhees, and the Haida tribes that once inhabited this bay. Laurel point was once a burial ground with no name, or at least not one he white settlers ever found out. The centre of town right on the harbour was the ‘place of muds’, once the richest clam beds in these parts, filled in to build the Fairmont Empress hotel.

The group represented a mix of those from Victoria Island – a large expanse of land with most people living the city, and then a very dispersed rural population; from Vancouver, a large conurbation nearby including Village Vancouver which created its own transition-like process and network over recent years; others from further flung Canadian and USA places, and one New Zealand fitting in the training with a tour of other environmental projects and people.

Mike was there, who has been in conversation with Rob about the community resilience indicators he developed; and our organiser Michelle works for organisations that help build capacity in community for self organising, democracy, creating businesses and services. I was struck by the sense of government supporting these initiatives and the difference it creates when the state demonstrates its commitment to local community life by funding high quality projects like these. It feels like one of the background determinants of how Transition shapes up – is there a sense that those in power will genuinely support the move towards local empowerment, or fight it? Is there a safety net for those already marginalised, or those who are about to lose dramatically through the reorganisation of work and finances that has already started? 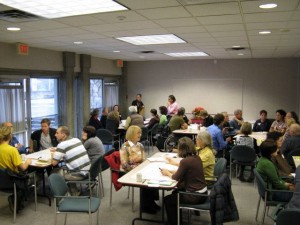 This question was raised in one of the discussion sessions after the visioning exercise – “what will Transition do about the criminals because let’s face it, not everyone is very nice?” The answer that came from the group was about the dramatically lower crime rates that occur in countries which embody that sense of society’s responsibility for all its members, so the principle of inclusion is there already. I have been curious about the criminal justice aspect of society and how transition will address that – noticing that we haven’t had any mention of it as a possible working group in Totnes, though one aspect of it – Restorative Justice, an extension of Non-Violent Communication – was talked about in the Bristol training last year.

The group of 36 was very impressive in their level of expertise, commitment and wisdom about the issues we face. We often say that about half of what people get from the two day course will be got from other group members not us and that certainly felt true here. The evaluation sheets participants filled out reflected a fairly common spread of opinion – for some there was just too much focus on inner transition and experiential exercises which felt uncomfortable or irrelevant, while for others this was a real strength, and the main piece of new learning.

One member of the group described having felt an outsider much of his life and spoke movingly during group discussions about his commitment to making a difference to those in need every day – for instance giving chocolate to a homeless man on the street. He didn’t always follow the request to take turns to speak and his stories often took time; yet at the end of the course there were tears in his eyes as he talked about feeling that he had for the first time in years found a group of people where he belonged.

The most searing memory I have from Victoria, penetrating even my thick head haze, was of the Oregano oil someone gave me to cure my sore throat – stunning stuff, and I strongly recommend it if you have any infection anywhere near that part of your anatomy. It will reach every part that other remedies have never reached before, and burn away all that is not pure, and anything else it touches… No worries mate!! (practising, obviously, for Oz)

Forty two people came to the Portland two day training, held in a Quaker meeting house. There was a sense of wanting to get on with things from the training needs assessment early on the first day– “What’s the model?” “Practical applications and projects”, “How to reach various sectors… homeless, other races, the poor?”. A key question seems to be – in this city where so much is already happening does Transition have something useful to offer? Can it help to create the next layer up, the emergent something that transcends the individuality of the existing groups?

We travel to the future in the visioning exercise. In common with many other trainings many report positive experiences. In the post – transition future people are fitter, more relaxed, you notice the quiet, you can feel the softness of the earth once the concrete is reduced. I always detect a hint of sadness or wistful feelings because this exercise puts people in touch with what they have lost and at the same time as it is an experience not just thinking about what we could have a renewed sense of commitment to make the Transition.

We end the day with a choice to do the Awareness raising game an learn about the Initiating group, or take part in a “Fishbowl” discussion about inclusion; with us trying to satisfy the two needs that were present in the group. A ‘fishbowl’ is a way of holding a deep dialogue in a group which tends to avoid the polarising that takes place in discussion, see The Transition Handbook for details of how to run one. What follows are some of the themes from this meeting, that felt like it went pretty deep..

The differences of the stories in North America from those in Europe:

* an indigenous people who still have a living culture, where in England the sense of indigenous lifestyle feels lost in history’s mists.
* The African American people here whose place here comes from the days of slavery. Something emerges about surviving that experience with your soul intact, still capable of loving, meeting, healing. Something we will all need to learn to do?
* And that everyone’s story is either of displacement, immigration, slavery or colonial destruction. We hear the effects of empire, where even the winners have lost a tremendous amount.

We end the first day with 3 words each.. “Tired and inspired” were the most common phrases.

At the start of day two one of the Portland organisers read out an email from a friend in Iceland where the economy has melted down since the banking crisis. Up to 60,000 people are facing unemployment out of a population of 320,000.. There are mass protests on the streets but the government has no plans, and no funds in the unemployment benefit coffers to create a safety net for people. The sender had been pepper sprayed by the police trying to “control” the demonstrations. People on the course reflected how close we are here in the States, and the UK, to reaching a similar place of financial and then social chaos.

In the afternoon we make another change to the usual schedule, offering a choice in the afternoon between doing the experiential work – adapted from Joanna Macy’s exercises – or attending a “Transition Clinic” to answer the practical questions about transition that are present. For me there’s still a question whether this was a good idea, there’s something very powerful about the whole group going through the shift in seeing and meeting that comes through the Milling, and the re-framing of our time and work that happens when we meet our descendants, and connect with their view of us as historic world changers. And in this group of practical people many appreciated the opportunity to get their questions about the practicalities of Transition answered.

Overall Portland felt like a satisfyingly challenging group to work with – wanting real answers and testing for themselves whether Transition was really going to offer them something of value.

On our day off we were taken by Jean, a member of the Portland Peak Oil group, up the Columbia River Gorge, a vast and wild stretch of water banked by steep cliffs of volcanic rock and pouring waterfalls. Portland is the end of the “Oregon Trail” – one of the routes that opened up this country to white people coming from the East. We learned that their choice at the end of their journey, having covered maybe 1500 miles already with all they thought they might need to start a new life in their wagons, was to float the wagons and swim their animals down the river, or be winched down a sheer cliff face by a scout on another route through the mountains. Both would result in some dying – humans and animals. What a choice, and what a way to start a new life. 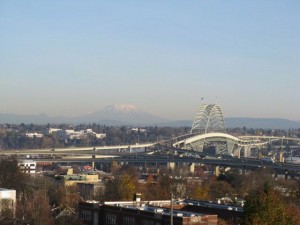 We left Portland on a clear sunny day, with the snow capped volcanoes that dominate Portland’s skyline Mount St Helens and Mount Hood, reflecting on the dramatic changes this landscape has seen, and will see again in the years to come.

Our thanks to David Johnson and all those who helped to organise this course, and the Quaker centre for the lovely venue.

I miss Sophy and Naresh’s humour and insight back here in Totnes. And Green & Blacks has filed for bankrupcy now that their sales of chocolate have gone through the floor!

Great to hear how it’s going.

Hugs to you both. Ben.

Thanks Sophy and Naresh for this inspiring report!

Glad to hear it’s going well, but I fear you may have been away from home so long that you’ve lost track of where you are. Could this maybe have been the city of Victoria on Vancouver Island?

I love the multi coloured rabbits. Shame you can’t bring us some home.

As one of the fellow guys in your Men’s Group Naresh, Im really inspired and impressed with the amazing work you and Sophie are doing. Miss you. Love Mark.