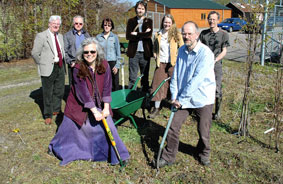 Digging in for the gardening season ahead are Carin Schwartz, chairperson of the Transition Town Forres group, and Paul Harvey, newly appointed chairman of the Forres Community Garden Group.

Garden Group All Set To Get Digging. From the Forres Gazzette

MEMBERS of the Transition Town Forres (TTF) group were celebrating last week after being officially given the keys to land on Bogton Road for their community garden and allotment project.

The group have been trying to get their hands on the land for about a year, and seemed to have to cut through a seemingly endless amount of necessary red tape before Moray Council would agree to lease the land to them.

The piece of land on Bogton Road where the old polytunnels are located was formerly occupied by Elm Nursery belonged to the Forres Common Good Fund, and difficulties also arose about a log cabin on it, which the group wanted to take possession of.

The TTF group received funding of £184,000 last year for a range of projects, including an allotment and community garden project, with the funding deadline of March 31 having to be met or the land would have to be given back.

However, Moray Council voted on March 10 to allow the project to go ahead, and the TTF group have since signed up to a nine-year lease for the land and vacant possession of the buildings and hard standing. They are hoping to be able to lease the old seagull field in the near future.

Spokesperson Carin Schwartz said that it was all last-minute stuff, with the actual legal lease signing only taking place on March 31, which meant the keys to the facility were not handed over until that same day.

However, she said it was now all systems go, and everyone involved in the project was delighted. She said that it was only with the support of the whole community who had rallied round them and lobbied Moray Council to move the issue forward that the whole thing had gone ahead.

“We are grateful to everyone who supported us and sent their good wishes to what has been quite a long process with the Moray Council,” she said.

Meantime, Moray Council have taken advantage of their learning from the whole process and are now formulating an allotment policy which they will be able to apply around Moray, and which will be used by various groups already in existence wanting to form a community allotment project.

Mrs Schwartz explained that they had already had a working party on the land at Bogton last weekend, and had decided on a community project rather than divvy up the plot into individual allotments.

Around six to eight people per group will be working together on a 200 metre squared sized plot of land, to help the project get off the ground.

There is a list of around 70 people already signed up to work the piece of land who are calling themselves the “Community Garden” group.

A Community Garden Committee has been formed and is planning on holding many work parties, events and training in the near future.

The group are also on the lookout for old garden tools and bits of useful furniture which people would be prepared to donate.

In response to questions asked by members of the public, Mrs Schwartz said that the group had been set up as a limited company and registered as a charity so it can take on legal obligations and buy or lease property in its own name.

“The organisation, rather than its individual members, is responsible for any debts,” she said.

“While directors have a legal duty to act prudently and to manage the company’s finances carefully, being a limited company protects both directors and ordinary members if things go wrong.”

She said that funders also regard this structure as more stable, knowing the company will continue to exist even if there is a change of people involved. Some funders will only give grants to registered charities.

“We just hope to make this even stronger by bringing more people together and becoming more self-sufficient in preparation for changes in climate and the reduction of access to fossil fuels, the overall goal being to protect our natural environment that is our home.”

Anyone interested in finding out about getting involved with the project or has any good ideas for the garden or wanting to donate goods should e-mail to ttforres(at)googlemail.com

As someone in the embryonic stages of trying to establish allotments and/or community garden in my village I would find any pointers/guidance regarding dealing with red tape very helpful, it had not occurred to me that forming a ltd. company might be involved for example. Charity status?! Does anybody know of a srep by step guide? I feel that community gardens are probably a fundamental first step in bringing communities together and thus instigating wider ‘transition’ initiatives so any help as to how to develop them
would be most valuable. HELP!!

Hi guys, well done… also going through this process to establish a community farm here in Harborough but our council wants to sell it for housing so we are less likely to be successful.

Julian, most towns have a Charity for the town (We have two here) and they could hold leases on your behalf if you asked them nicely.

Did you know that your town council has a legal obligation to provide land for allotments if there are more than 10 people on a waiting list?

Here in Hay-on-Wye a landowner has offered the use of 2 acres for allotments. Nothing has yet been finalised but the idea is that the council will lease the land and manage the allotments along with the already existing allotment society – both of whom have been consulted and are very keen. In Kington a similar arrangement is up and running – they ran a poster campaign about allotments and as a result a landowner came forward.

I am trying to find allotment projects that have been funded by the Climate Challenge Fund and in particular reagarding the use of raised plots. We are looking at using raised plots to combat a slight contamination probelm and wondered if you had any of the same issues. any help on this ( even to hear that you didnt have this issue) would be a massive help.