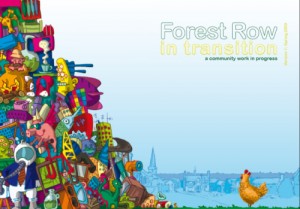 Great excitement greets the news that Transition Forest Row have published their Energy Descent Plan! Transition Forest Row is one of the earliest Transition initiatives to set up in the UK (it held its Unleashing just over a year ago), and a year ago they were awarded a grant from Wealden District Council of £5,000 to create their EDAP.  The result is a fascinating combination of storytelling, cartoons, drawings and practical steps to an oil-free 2030.  You can buy copies here.  The plan initially drew on a lot of information and ideas that emerged from community events and consultation, and then, as the deadline loomed, was taken in hand by an editorial team.  The idea of a narrative emerged as a way of conveying the information, so the main section is based around telling the story of a family called ‘The Forresters’,  how they made the Transition and how Forest Row changed around them. 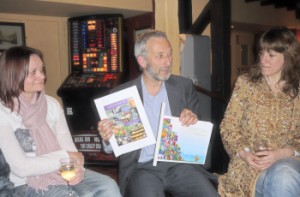 When I spoke to Mike Grenville of Transition Forest Row (see right, Mike holding a copy of the plan at its launch), he told me that the challenge they found was to use language and ideas that would be accessible for people in the village who were already on board with Transition and putting many of the ideas into practice, and also for those who had yet to engage and to whom these would all be very new ideas.

The plan does a great job of presenting the necessary changes as positive steps, while at the same time weaving in a feel of the larger changes going on around people.  Food riots in 2018, for example, are mentioned in passing.

A copy of the plan has been delivered to every house in Forest Row, along with a copy of the excellent Local Food Directory that TFR have just produced.  Reaction so far has been very positive, one child who opened the door and was given a copy saying “wow!”, just from a quick thumb through… .  Congratulations to all involved for producing such an inspiring and high quality document in such a tight time frame.  I urge everyone to get a copy.  They will also be available at the 2009 Transition Network conference in London, where Mike will be participating in a workshop about EDAPs.

I spent two wonderful years as a student at Emerson College in Forest Row. It changed my life and planted the seeds for my vocation as a garden designer, way back in 1971! I’ve ordered a copy of the EDAP and can’t wait to read it.

Who said it’s sold out!!! We have lots available!

If anyone wants multiple copies please order direct from contact@transitionforestrow.org

My sister, who lives in Forest Row, has put up shutters, using velcro, to conserve heat and keep out the light, as a result of your plan. Though she’s not the normal greeny, she thinks the document is both lovely and practical.

How about a PDF copy for us all to look at?

We will make the PDF available a bit later. (The print version looks much better though!) Before we release the PDF we’d like to make some sales of the printed copies that were beyond the budget and on personal personal financial risk.

We’re selling for £3 each plus postage or post free at the conference.

Congratulations from the other Forest – of Dean! We will be using a few copies over here.

Is it possible to buy a copy of this without going via Amazon – as I sell my own Permaculture Beginners Guide book through them I know what a huge rake-off they take from the cover price, and would be much happier if TT Forest Row got that money – I’d also like a soild copy rather than a PDF…

That would be a SOLID copy, not a soiled copy…

Thanks Mike, I’ll order a copy now, well done on getting this great looking document out.

Already ordered my copy through Amazon. Seem to recall that they said it was a pre-order – as book not available yet? Maybe they just hadnt updated their website – and I’ll get it soon now anyway hopefully.

Graham: I was going include som eof our lovely bio-dynamic Forest Row soil with your copy 😉

ceridwen: Yours will be the first order through Amazon so not sure how long the communication wheels will take to get to us with your order.

OK, will send a cheque, however have you thought about putting a paypal button on the Forest Row website to catch the casual buyers and folks who never quite get around to buying a stamp…