Celebrating the Art of Failure 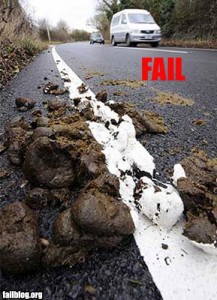 It is often said that in Transition we celebrate our failures as much as our successes, and that an openess and honesty about when things fail is vital for Transition to proceed.  In the film ‘Garbage Warrior’, the thing that most incensed Michael Reynolds when he lost his building permit was that “they have taken away my right to fail”.  I was delighted therefore last week to come across the website FailBlog.org.  It is a site that celebrates failure in all its many form.  It has a sharp eye for things done badly, or disastrously, and as I explored its posts on Friday lunchtime, my roars of laughter could be heard resounding throughout Transition Towers.  One of my favourites is this one, on the left.  Give yourself half an hour or so to have a look through it, it’s a treasure trove of inspired failure.

Hooray for Big Belly Flops! This is SUCH an important thing, and a huge strength for the Transition movement. The ability to remember failures, to sometimes laugh at/with them, and to honor them is just incredibly powerful.

There’s a theme song available, too. From Chitty Chitty Bang Bang- “Up From The Ashes”. From the ashes of disaster grow the roses of success!

The humour on that site often has a hostile undertone; it’s very anti-community. The site often is the equivalent of pointing at someone and laughing at them. In this case, the pointing (so to speak) isn’t so direct — which makes it better, in some ways, but worse in other ways.

I’m only highlighting certain features of the web site though; I don’t mean to say that what I’m mentioning is all that there is to it.

TB. I agree that there is an undercurrent in some of the posts that is a bit unkind and cruel and laughing at other peoples’ misfortune. I did feel though that the large majority of them are more based around a particular way of looking at things, a particular eye for the absurd, which I thought was very funny. I don’t know about “anti-community”, I’d say more slightly cruel and sniggering at other peoples embarrasment, but that is only a very small part of it.