Was fascinated to hear an interview with Dr. Colin Campbell over at www.lifeinfo.de in which he announced his retirement from the speaking circuit.  Can’t say I blame him, he has been such an extraordinary ambassador for the peak oil concept that, nearing 80, you really have to admire the fact that he is still out there giving talks at all.  I feel I have such a huge debt of thanks to Colin, that I can’t let such an historic event pass without reflection.  There are many people in my life who have served as sources of inspiration, but Colin holds a special place for me, with his warmth, accessibility and natural inquisitiveness, and his ability to present the peak oil argument in a clear, simple and understandable way.  Meeting Colin took my life, turned it on its head, shook it around vigorously and then left me to figure out what to do next.

Anyone who has read ‘The Transition Handbook’ or who has heard me speak will have heard the story of how I first met Colin.  I was teaching in Kinsale at the college there, and heard that Colin lived up the road and invited him to speak.  It was 40 minutes that changed my life, and that of many of the students.  Those of you who have heard me tell this story for years might enjoy hearing his version of events, which you can hear in the interview here. 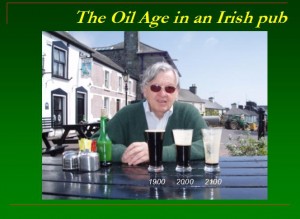 Colin has always been amazingly accommodating to new people finding out about peak oil.  Many people make the pilgrimage to Ballydehob, often accompanied by a camera crew, but all are made to feel welcome and given time.  I am so thankful for the hours spent with Colin in his office room there, as he answered my questions (which probably most people with GCSE Geography would already have known), and for the various talks we have done together, as well as his reading through the peak oil part of the Handbook in its draft form.  It has been amazing to see how Colin’s thinking and insights have been spread through his work, and also to see at every ASPO gathering the high esteem in which he is held by his colleagues.

It is very touching for me to hear, in one of his last interviews, the esteem in which he holds Transition.  He has always been very supportive of the idea, very enthusiastic, and given that without Colin there may well have been no Transition, it is an honour to get a mention in this piece.  He has been an extraordinary servant of the peak oil message, an ambassador able to deliver the message in such a way that very few people could pick holes in it.  We are all very much in his debt, and I wish him all the very very best.

If you have never seen a talk by Colin, you’re not going to now (!), so here is a talk he gave a while ago in Cornwall.

That’s a real shame. I attended a talk by Campbell a few years back for a newspaper I was working for. It was really interesting, and the video has brought it all back.

Wish I’d met him; ought to go to Ireland more often. That’s the place for inspiration, no question.