« A Transition Take on the UK Low Carbon Transition Plan
A Chicken Greenhouse Update: notes from the cutting edge of permaculture inventiveness/absurdity » 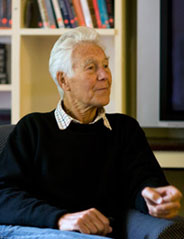 It is with great sadness that I report the passing, last week, of Dr Brian Goodwin, of Schumacher College and also Trustee of Transition Network.  Originally from Canada, he spent his career working in biology and mathematics, and was very involved in the Open University.  Upon his retirement in 1992 he became one of the founding members of Schumacher College, where he was able to focus on his passions, morphogenesis, evolution and complexity.  It was through Schumacher College that I first met Brian.  He always had a twinkle in his eye, a passion for learning and knowledge and for new ideas.  He was a passionate supporter of the Transition movement, serving as a Trustee from the outset, seeing it as the practical manifestation of complexity thinking in practice.  You can read an interview I did with him shortly after I arrived in Totnes here, and a great article he wrote about Transition published shortly before his death, entitled ‘Resilience’, which looked at the Transition movement. 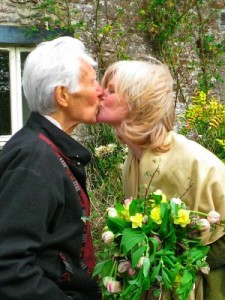 A few months ago, Brian was married to Christel, in a beautiful day’s celebration at Schumacher College (see right).  In spite of his being clearly unwell, the day was a celebration of their love for each other, as well as of Brian’s life and work.  Although a wedding, the day also had the feeling, to me at least, that it was his way of saying goodbye to everyone, although at the time it was intended as a goodbye due to their plans to move to South Africa.  Brian died peacefully last week from complications arising from an operation needed after he fell from his bicycle and fractured a bone in his arm.

He made a great contribution to Transition Network, both as a Trustee, and also in the extent to which his thinking around complexity and systems pervaded the ‘Who We Are and What We Do’ document published several months ago.  We will miss his inputs, his energy and his humour very much.  If I reach the age of 78 with the same lust for life, passion for ideas, and concern for others that Brian showed, I will consider that I have done very well.  He was a dear and brilliant man who I will miss very much and who inspired me greatly.  My deepest condolences to Christel, to Brian’s family, and to the community at Schumacher College.

So sad to hear this. I didn’t know Brian well, but I knew that he was wise and gentle. We’ll miss him. Condolences to family and college community.

Just to let you know it was his hip he broke, not his arm.

Otherwise nice to hear your comments.

Thanks for that Ella, much appreciated. That was the story I had heard. My condolences.

A great and shared sadness at the loss of Brian to the spirit in the sky, he inspired the many people he met.

I had the privilege to work with Brian on occasion, & he was generous enough to participate in workshops that I organised here in Exeter. He was one of the two great intellectual inspirations of my life.

Dear Schumacher and Transition Network Friends of Brian,
Although I have been immensely saddened by his death I am delighted that Annamaria Coursi (Oxford University e-Research Centre) this spring invited him to participate in her program on modeling and life. Reluctant to return late at night to Devon and with a date at Wadham College the next day he stayed with me here in this privileged ambiance at Eastman House until after breakfast. Although I had known him for years it was this final cadence, the memory I will cherish. He insightfully still criticized branches of biology that have separated themselves from the realities of life: neoDarwinism, reductionist molecular biology, developmental observations in ignorance of environmental awareness. He eschewed these “fallacies of misplaced concreteness” and many other fashionable but intrinsically limited frantic and mercantile trends. Here with the much admired twinkle in his eye he spoke mostly about the future, his future with his beloved Christel, their imminent move to South Africa and the transition to social sanity he advocated and for which he worked ceaselessly.
How shocking now his demise. He was an original wiseman and will be missed by you and all of rest of us who enjoyed, if even only sporadically, the pleasure of his scintillating, yet gentle and mindful company over the years.
Eventually I hope that a fittingly lively ceremony in his memory will be planned. LM

Really sad to hear about Brian Goodwin’s death. I thought it was an after-effect of his aorta-operation, an operation we both underwent, but now I see he could have lived much longer. I have recently written extensively and with great admiration on Nature’s Due and got his word that the title is a pun: both meanings are intended.
His death is a great loss to a world that is so unwilling to learn, but fortunately there still are some who think better: Stuart Kauffman, Stephen Harding, Robert Ulanowicz, Henry Bortoft – I have written on them all (in Sweden, however, I am alone). But gone are Ilya Prigogine, Erich Jantsch, Gregory Bateson, E F Schumacher – gone, but there books are still with us!
Erland Lagerroth, http://www.lagerroth.com