« The ATMOS Project: Transition in Action
Giving One of the 2009 TED Talks. Gulp. » 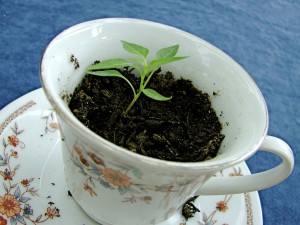 Dr. Gill Seyfang from the University of East Anglia has just published a very important piece of research, entitled “Green Shoots of Sustainability: the 2009 Transition Movement Survey” which you can download here.  94 UK Transition initiatives were sent an online questionnaire, of which 74 responded (a great response rate, thanks everyone).  The results are fascinating, offering an in-depth snapshot of where this young movement is at after less than 3 years.  It looks at the challenges as much as the opportunities, in keeping with the idea that we need to learn as much from failures as from successes.  What fascinated me was how the top challenges that emerged, in particular how to sustain deepening of engagement, and how to keep reaching beyond the ‘usual suspects’, is what has already been identified as the core aspects of Transition Network’s work over the coming year.  Be great to hear your reflections, and your suggestions for responding to the findings of the study.  Do they capture where your initiative is at?  My main reflection was what amazing work people are doing, and how, rather than the daft ‘Low Carbon Town’ competition announced in the recent UK Low Carbon Transition Plan, some sustained funding for training, materials and support for Transition initiatives would serve a great deal better at enabling the continued growth and deepening of Transition across the country.

What an eye-opener, and a encouragement as well! It’s an informative addition to the 7 Buts and a great resource for someone who is thinking about setting up a Transition Initiative in her town. Reading it has strengthened my resolve!

In a defiant statement, they said: ‘As workers at a wind turbine manufacturer, we were confident that as the recession took hold that green or renewable energy would be the area where many jobs could be created – not lost.

‘So we were horrified to find out that our jobs were moving abroad and that more than 525 jobs from the Isle of Wight and Southampton were going to be added to the already poor state of island unemployment.

‘This has sent, and will continue to send, shockwaves of uncertainty through countless families on the island – many of which are being forced to relocate away from the island.

‘We find this hard to stomach as the government are getting away with claiming they are investing heavily in these types of industry.

‘Only last week they said they would create 400,000 green jobs. How can the process start with 600 of us losing our jobs?

‘Now I’m not sure about you but we think it’s about time that if the government can spends billions bailing out the banks – and even nationalise them – then surely they can do the same at Vestas.

‘We will not be brushed under the carpet by a government which is claiming to help us.

‘We have occupied our factory and call on the government to step in and nationalise it.

‘We and many others believe it is essential that we continue to keep our factory open for our families and livelihoods, but also for the future of the planet.’

The workers began their occupation at 7.30pm on Monday night.

The occupation followed the announcement by Danish company Vestas Windsystems that it intends to sack 525 workers at the blade manufacturing and research plant at Newport, and a further 100 workers at its plant in Southampton.

Yesterday morning 25 workers were occupying the factory, while 200 workers demonstrated outside after riot police prevented them from joining their colleagues when they arrived.

The occupiers are locked in a first floor office with supporters passing food up to a balcony.

Lindsay Williams, Branch Secretary Portsmouth City Branch Unison, told News Line: ‘We’ve had a text message from inside the plant saying that demonstrators have got through the police cordon and have joined the workers inside.

‘These workers are just trying to save their jobs and save their factory.

‘We support the workers’ call for the nationalisation of the plant.’

John Rowse, Unite national secretary for manufacturing, said: ‘It is not too late to save these plants. If the government addresses the blockages in the planning system to counter the “Not-in-my-back-yard brigade” then there will be massively increased demand for wind turbines.

‘We urge the government to match its green rhetoric with action to support green jobs, saving Vestas would send out a clear message that it is serious about saving the environment as well as supporting UK manufacturing.’

This is also part of the Transition reality that needs to be supported and in the same way. No expropriation of land, No Transition Movement, No permaculture. Let’see if all those radicals out there know where the battle lines are being drawn.

In Transition Lancaster our Real Wealth and Livelihoods group is devoting the next 6 months to building a platform with unions and reps to demand transition (transformation) in the workplace.
There is a joint union document coming out in October called Just Transition. We want to see action in every workplace so that employees go from robots reproducing capitalist goods with built in obsolescence into rebellious actors refusing to make and sell rubbish short live products.
The Transition movement must in my opinion spend a lot more time acting and organising in the workplace rather than being a soft option in the community. Inevitably that brings up issues of power, ownership and control. However, I am excited and surprised how our Transition Initiative in Lancaster is sending out wider and wider ripples.
Some of us are of to pay a visit to Vestas headquarters in Warrington soon for a nice day out

Sounds fascinating – post more info here or even better on the forum here: http://transitiontowns.org/forum/ about your experiences.

This is a crucial area and it sounds like you may be going about it in the right way.

[…] Some of the challenges faced by the various Transition Initiatives in Colorado have been not having enough funding and relying too much on volunteer help, leading to burnout of initiating group members; difficulty in reaching a critical mass of awareness and support, particularly in sprawling suburbs such as Westminster/Arvada/Broomfield; a lack of training in effective group facilitation; and dealing with populations that are transient, overly busy, in denial about the magnitude of the social and environmental problems we face, and highly individualistic with competing hidden agendas. None of this is unusual, as these findings are consistent with what was found by researchers at East Anglia University in England in their 2009 survey of the UK Transition Movement—“The Green Shoots of Sustainability”—available for free online here. […]