David Boyle’s speech at the launch of the Brixton Pound 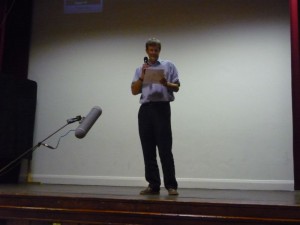 “One of my first experiences of currencies along the lines of the Brixton pound was in Ithaca in upstate New York, where they have had an amazing printed currency for the last 15 years. You can get loans in it. The biggest loan was for $36,000. Not bad for a local currency. Some of the notes are printed on paper made from Angora rabbit fur, which is an innovative solution to the problem of counterfeiting which has not yet struck the Bank of England. But I met a man there who had been mugged in Manhattan. The mugger searched through his wallet and said, hey what are these?. He brandished a pile of Ithaca notes.

My friend explained that they were a way to keep local economies moving, and the mugger was fascinated. Wow, he said. You’re right about the world: money doesn’t work for people like us, does it. And of course it doesn’t work very well. It works beautifully for a very few, for whom it is endlessly elastic and flexible and forgiving. When Robert Maxwell fell off his yacht, he owed twice as much as Zimbabwe. But he had a yacht. 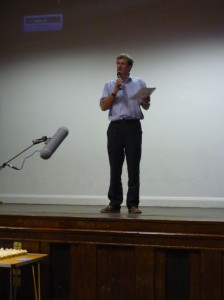 For the rest of us, it is very concrete. We have to pay what little we borrow back according to the rules. Because otherwise, well its moral jeopardy, isn’t it. We might learn bad habits. We might get perverted somehow from the straight and narrow. Then there wouldn’t be enough to bail out Citibank again! But then Americans, it seems to me, understand these things better than we do. Their new kinds of money caused the War of Independence in the first place. Benjamin Franklin with his printing machine. They had 5,000 depression currencies in the 1930s which luterally kept people alive through the Great Depression. Some of them were made of wood, which is a bit bizarre.

We have Captain Mainwraing. Or we did. In fact, that whole tradition of dull, careful bank managers has been swept away in this country. When American investigators began looking into the subprime mortgages which cause the great bank crash of 2008, they looked down the list of borrowers and – on the very first page – they found one paid to someone called M. Mouse.
Other cartoon characters followed. When you start shelling out mortgages willy nilly to anyone, whether they can afford it or not, because they are considered risk free to the bankers – that’s what happens. That’s the opposite of the kind of money we need, and the opposite of the imaginative self-help money we are launching today.

Worse than that. It is a kind of lie. A kind of theft. There used to be 144 breweries in New York a hundred years ago. Now there are six. There used to be ten thousand local papers in this country then. Now there are about a few hundred. We are experiencing a money system that is driving out this diversity because it is monocultural. It makes everywhere the same. One kind of measuring stick. One kind of business. Monoculture money systems drive out other cultures, other species, other languages, other opinions, other forms of wealth. We can see this everywhere.

The great harbours and rivers that have bustled for a thousand years. Empty. The farming communities and fields of the world covered with weeds. Even the great corporations – whatever else we may think of them – shedding all the real work until they are just shells that just do financial services. There’s a great silence descending on the world. It’s a kind of death. The very opposite of life creating, and that’s why I am so excited about the Brixton pound. 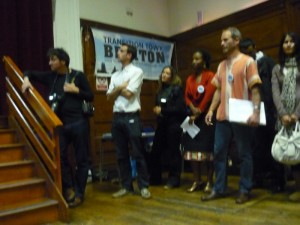 There’s a kind of thrill about it, it seems to me. You hold those notes and you say, Can you do this? Can we just print it then? It seems too simple. Aren’t there laws against it? The answer is you have to make sure you’re not claiming it is a bank of England pound, a promise to pay the bearer on demand pound. In fact, the organiser of the Liberty Dollar in the States, who mints sterling silver coins he calls dollars, has just been arrested. Ten years, the Isle of Wight County Council were prosecuted for minting their own coins. But they would have been fine if they hadn’t called them euros.

So no, it IS legal to print your own. You can use what you like as money after all, if someone will accept it. We still have that freedom at least. But there’s still a moment of breathlessness when you hold these things in your hand. As if you were somehow touching the stuff of life. And in a way you are. Because money is like blood. It circulates around us, and when it disappears somewhere – because of some squall on Wall Street – our lives seize up a little.

And let’s stay with the idea of lifeblood for a moment. Before William Harvey announced his theory about how blood works in 1616, most people thought it was made in the liver and the heart and swallowed up by the other organs. Harvey showed that it was the circulation of the blood that really mattered. If nothing circulates, the patient dies. It’s the same with economics, and local economies. If the money goes round, or any medium of exchange, the place lives. If it doesn’t, it dies.
It doesn’t matter really how much money there is in total. 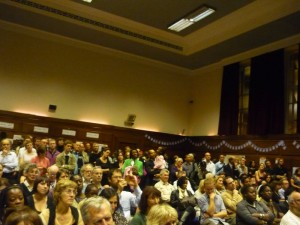 But economics hasn’t reached William Harvey yet. It still adds up the bottom line, and if doesn’t work, they get the scalpel out and bleed the patient. So money is life, and we can make our own. That’s why I say those Brixton pound notes are alive. It is a small liberation to use one. A bit like the moment Gandhi made salt for the first time. a symbolic moment of revolt, using the stuff of life. So every time we use one of these notes, it seems to me – and we are going to have to use them if this is going to work – it is a moment of liberation.

To run our own lives. To set us free just a little bit from dependence on the government or Tesco. Or are they the same thing these days? To make Brixton a place, knitted together, with its own money and its own life, not just a tube station with housing attached. I don’t pretend it’s going to be easy. I don’t pretend there are no great issues to face, and decisions to make. I don’t pretend we can possibly get there in one leap. There are going to be disappointments and frustrations along the way.

But every time we invest in this money and take it out of our pockets, to exchange it for something – looking the shopkeeper in the eye as we do so – we are shaping our futures. We are clawing back just a little control over that great global money system that swirls above us like the gods. It may be a bit of paper now. But it is a small lever with which we can move the world. Good luck to it.

What a great talk. I wish I’d been there for the launch. Another epochal transition moment.

Wonderful speech and I liked this:
“They had 5,000 depression currencies in the 1930s which luterally kept people alive”
Let’s keep our luteral thinking going then!

Nice work Mr Boyle. I just got his book out of the library this afternoon.

Off topic–I’ve posted on the TT forum. I read somewhere that the criteria for becoming a Transition Initiative did not allow the initiating group to be a local government, that the group had to be 4-5 local citizens. Can anyone steer me to a source URL? I understand that another criteria is to have a close relationship with a local council, but that’s different than having the council start things up. Thanks for the help. richardbelldc@hotmail.com

David Boyle is a national treasure.

Ah, great! I wish I’d been there… I just think this is FANTASTIC! I’m sooooooo excited about Transition and about what’s happening and where it will go… The great silence that David says is decending on the world – well, it will hover, and then float away because Transition won’t let it land. It will never be allowed to descend on the communities that live in the light and the hope of Transition. And that hope is there in David’s words about the Brixton pound…very inspiring. And I just wonder how it will be when ALL transactions will be made in local currencies – how will that look, how will it be, how soon will that happen? Vaclav Havel, the first President of the Czech Republic, said “We must not be afraid of dreaming the seemingly impossible if we want the seemingly impossible to become a reality”. So we must dream…and then, who knows?
Helen A

“I just wonder how it will be when ALL transactions will be made in local currencies – how will that look”
– It will look like there are no bananas or rice in the shops.

Too much rhetoric in this speech and the comments for me I’m afraid. What is going to be the effect on the REAL economy of Brixton of the circulation of more money? What do Brixtonians produce? The local currencies of the 30s depressions seemed to have worked in localities where big productive facilities (e.g. mines, factories) had shutdown because of a lack of trade. If workers would accept just the local currency then the factory could afford to re-open. The local currency supported the production of real goods. What sort of stimulus is the Brixton pound going to produce – the shopkeepers have to be able to spend the BPs they receive.
Finally, don’t forget that you can trade by just giving things away.

[…] behind the whole project, followed by an extraordinarily interesting and informative talk from David Boyle from NEF, one of its key […]