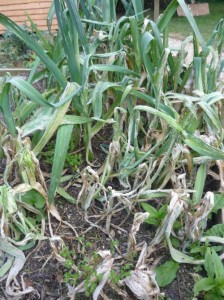 Last year I grew fantastic leeks that stood tall and proud in the garden through the winter months and underpinned many a meal.  This year I got them in good and early, and they were looking wonderful. This week though, something has gone horribly wrong. From being proud columns of dark green leeky goodness, they have begun to crumble before my very eyes. Starting somewhere around the middle, they are being turned into slimy ribbons, eventually being reduced to stumps. This is not good.  What ails my leeks? 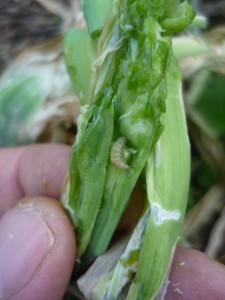 Closer investigation reveals this little fella (see right) and his mates, happily munching their collective way through what should have been my leek supply for the winter. The only suggestion as to what they were came from a browse of  Charles Dowding’s essential ‘Organic Gardening’ book, which suggested they could be the maggots of the ‘leek moth’ (I already don’t like it, just its name alone breeds instant dislike), or to use its Latin name, Acrolepiopsis assectella.

Given that from Dowding’s (albeit brief) list  of potential leek ailments, white rot and rust were clearly not what I had, I set off to find out more about leek moths.  I popped to the website of the Royal Horticultural Society, and as soon as I clicked the link, I recoiled, there was my leek!  All dishevelled and crumbly looking!  Apparently, the leek moth has only been present in the UK since 2003, and is also rather partial to onions and shallots (you have been warned).  Originally they were just found on the coasts, but they are heading inland in southern England (the guy at GrowsonYou.com reckons he has been unlucky enough to have them on his leeks, as far north as Hereford!).  The leek moth is, of course, just one of the many species moving northwards as the climate becomes more to their liking.

Apparently, larger plants are more able to resist, but I had mine out really early this year, so that can’t be it.  As I delve deeper into the murky world of the leek moth, it seems that life may never be the same again (at least not so long as I live in southern England).  Over at the Saunders Allotment website, I’m told that “realistically, if you live in an area where leek moth is prevalent the only way forward is to provide some form of physical barrier to prevent the female moth reaching the crop”.  Once the maggots turn into moths, in the autumn, they overwinter, and then next year, there they are again!  Boo.

So the only thing for it is fleece apparently.  No pesticide exists, no other way of dealing with it.  They’ll all have to be pulled up and got rid of.  Only thing I can think of is chicken tractoring, to get rid of the overwintering critters.  But then, if this year’s gardening experience is anything to go by, I need fleece also for the carrots to keep the carrot fly out, and fleece to keep the wretched cabbage whites off my brassicas.  Might as well just cover the whole garden in it.  Perhaps I could get a grant for it under the UK Government’s low carbon strategy, as all that white surface would reflect a good deal of sunlight back into space?  Didn’t see it mentioned in James Lovelock’s recent piece on geoengineering though…   Perhaps the leek moth, a climate change tourist, might end up triggering a collective response to climate change?  Or perhaps, more likely, just increase imports of leeks from more northerly climes.  You have been warned.

Yes these are a real sadness. I have been suffering with them for a few years now in Brighton and don’t get too many really big leeks. However don’t dig up all your crop, you may be surprised how many of the leeks fight back and recover. They will of course have had their growth stunted but will still provide a good winter crop, especially if autumn stays warm.

A great shame. I’ve never suffered from them myself, but I reckon that it’s only a matter of time…

By the way Rob, have you tried companion planting things like peppermint with your leeks? Strong-smelling herbs are brilliant for repelling insects. Not sure that they work on *dun-dun-DUN* Killer Mutant Leek Moths, but it might be worth a try.

[…] This post was mentioned on Twitter by Kari Burks, Self Reliance and TT web team. TT web team said: Leek moth: seems to be happening all over; not just Bristol!: handy research from RH: http://bit.ly/Io9UX […]

Rob, you might consider, for next year, netting cloches to stop the buggers getting at the leeks in the first place!

You can buy these of course but a cheaper alternative would be to get hold of some of the fine meshed debris-netting sold by scaffolding suppliers. You’d have to knock up a frame to stretch it over, of course, but in theory it should be possible to isolate your leeks during the critical May-October period while still being able to water them.

This could be an opportunity for the Transition research project! How about designing a climate-proof companion guild that would repel the leek moth?

Weve got them on the Langton Matravers allotments too!! We avoided the carrot fly, by putting a wooden barrier around them..would this work for the Leek Moth??

It’s war! So – that’s why my leeks have failed here in Cardiff…probably. My leeks look just like yours although I hadn’t seen any of the actual critters, probably wasn’t looking hard enough.

Maybe worth a try…
Allium babingtonii (Babbington’s Leek). I think it was these I saw growing at the schumacher institute forest garden in Dartington… And if I remember rightly they are harvested after 2-3 yrs (when they are large enough).

They grow in shade and will succeed in growing through a (thin) ground cover planting… I think I’m going to try these from next year.