« Transition Together: a fantastic new resource for Transition Initiatives
The Potential of Freshwater Aquaculture »

Mark Thurstain-Goodwin Responds to Colin Tudge on ‘Can Totnes and District Feed Itself?’ 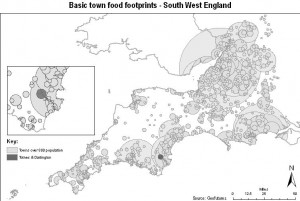 Food security and the need for GIS models

As expected, the recent paper ‘Can Totnes and district feed itself?’ has started stirring things up. An intriguing response comes from Colin Tudge, a director of LandShare CIC (co-funders of the research) and leader of the Campaign for Real Farming. Colin’s thesis is that the food security issue is a simple matter of feeding the population as far as practical from local sources, recognising that some trade between specialist production areas will always be necessary. He argues that we simply need macronutrients (energy foods and protein), mainly in the shape of grains, and micronutrients – vitamins and minerals – and that by growing lots of wheat and encouraging more urban horticulture we can feed ourselves. I’m brutally over-summarising, of course, but he is keen to keep things simple.

This desire for simplicity makes him question the value of analyses like the land use mapping Geofutures did for this piece of research: “Elaborate models analyzing overall ecological footprints of particular communities in fine detail are not necessary. So long as we do the best we can within the guidelines we can’t really go wrong,” he writes.

However, at the end of his commentary he includes a postscript in a different mood. “This and all the other questions raised in this essay could and should have been addressed decades ago, and would have been addressed by any government that was truly alert to world trends. There are many other questions, too – scientific, economic, sociological, moral, practical. Since the government is unlikely to act this side of food riots (which it will treat at “terrorism” and call out the riot police) people who give a damn need to ask the questions for ourselves.”

I believe in these sentences Colin contradicts his own conclusion that research – even elaborate models – are unnecessary. The Transition movement has been successful because it responds positively to this fear. People who have never been engaged in environmental questions are getting involved and feeling empowered to help plan their communities’ futures.

And government (here I include many local authorities, which have embraced Transition planning in local strategic plans) is witnessing this community feeling and slowly starting to respond. To encourage this and make energy-descent planning truly meaningful, major resources and policy shifts are needed. My experience of this kind of government is that is moves slowly and demands evidence before committing taxpayer’s money. The farming community needs evidence before it will change any current practices too.

Food security is not a stand-alone issue, of course. The land use analysis and mapping undertaken for this study was not as detailed as we would like – it needs local data from across the country to move to next level – but even so it revealed absolutely fundamental issues which will impact food relocalisation and our life experience after Peak Oil.

There is not enough woodfuel for space heating. If we need to relocalise food production, people will need to live in rural areas, including building houses on protected rural land. And major conurbations overwhelm the foodsheds of surrounding communities. Even if we could be steadfastly common-sense in our approach to planning future food supply, I’d say joined-up planning encompassing these kinds of issue is going to need a wee bit more research to get it right.

Colin describes his own analysis of food security as ‘radical’, and his faith that common sense will prevail without major shifts in political and economic priority is certainly that. In using phrases starting “What all cities can do is…” he is not acknowledging the gap between technical possibility (yes, we can all plant tomatoes on our balconies) and reality (but we won’t while we can still get them dirt cheap at Lidl, and by the time we realise we’re really in an energy crisis it will be too late).

The Transition movement is precisely about how we move from here to a more attractive version of the future, and for me that’s where there’s plenty more meaningful research still to be done.

From the Geofutures blog.

I’m worried about the “people will need to live in rural areas” bit. I live in one and realise just how difficult it will be come the time when transport becomes a problem. Our local shops have closed and the nearest post office is about 4 miles away. Buses are a 15 to 20 minute cycle ride away and even then are unreliable to say the least. Forget about trains. Too expensive and too far away from here.
There is much talk about urban resilience. Rural resilience is a huge problem.
I’m reminded of the man who was asked the way to Dublin and in return sadly shook his head and said: “If I was you I wouldn’t staqrt from here at all!”

In some ways, urban areas – and particularly pre-circa 1970s ones – exhibit remarkable positives in terms of what I suggest we could refer to as “potential resilience”. A very good example of this can be found if you go to Google Maps’ satellite imagery and find your way to Birmingham. The amount of potential growing space available outside of the immediate city centre but within an urban environment is obvious at a glance.

Rural areas such as the Machynlleth district in Mid-Wales do not have as great an advantage in terms of potential resilience as one might think. Lots of land, yes, but a high percentage of it acid upland moor. This supports pretty much one food-plant at the moment, though not a bad one by any means – the bilberry. Hence its use for sheep-grazing, for most of the year although severe winter weather can and does compromise that and then the sheep have to be placed somewhere else.

Looking further ahead though, a warmer climate would in time permit cultivation at higher altitudes. If you explore the old peat-diggings in the mountains hereabouts, at 450-500m above sea level (current treeline is generally about 300m ASL with the exceptions of the many conifer plantations), you will see ample signs of what is termed “bogwood” – birch, hazel, pine and other useful trees that once thrived up there, and if lucky you might come across evidence of these woods being once-fertile hunting grounds in the form of arrowheads. Some images of the remains of these woodlands can be seen at:

They date back to a prolonged warmer, dryer era that came to an end later in the Bronze Age, maybe circa. 3500 years ago. But it is unsafe to assume that’s what we will get within a couple of centuries now. For such things to grow in such places, a stable warmer climate is required – as opposed to the climatic instability we are likely to see in the medium term.

Reply to John Marshall’s comment.
“people will need to live in rural areas” this is because there will be no oil for farming or transport. More people will be needed to return to the fields and to live closer to the things needed to sustain life.
I take your point that there is under investment in trains and buses in rural areas, but if this is a supply and demand problem then more people means a better service. But i would argue that there will be a greater demand if your work and all your supplies are within walking or cycling distance and there will be less money for things like holidays.
The biggest challenge Transition faces is breaking the “business as usual” mentality. People need to realise that the only reason they have the life they do is because of oil. Without it means a change in lifestyle never before seen in human history. That is why we are already at War to maintain our current way of life.

I find it fascinating the food report concludes feeding Totnes and District locally would require a few changes which would end up resulting in much healthier lifestyles. Over-consumption of the difficult things to produce locally –the acid-forming foods such as meat, dairy products and grains, along with under-consumption of fruits and vegs grown in healthy soil –has resulted in widespread health problems in industrialized societies, a state of affairs I have much personal experience with. In this sense, the report reveals a case of “the problem is the solution,” a permaculture idea it is always delightful to find examples of. The dietary changes described in the report, rather than being bad news, in fact would make people a lot healthier. Humans need to eat 80% alkaline-forming foods, which are basically your more easily-produced garden things: fruits, vegs and tubers. Also health-promoting would be having more people living active lives tending the land and working outdoors. An epidemic of vitamin D deficiency is the new cause celebre of naturopathic doctors here in the U.S, brought on by the near-zero exposure to sunshine typical of modern lives. Of course the research had to look at the feasibility of locally producing currently popular eating habits. And the report’s conclusion: Yes we can feed ourselves locally with a few [health-promoting] lifestyle changes is very good news indeed.
Great work utilizing current models (of lifestyle and analysis) which end up pointing out new ways.

Many thanks to the authors of this landmark study. In contrast to Colin Tudge, I think local and regional land use and food shed mapping is very much the analytical methodology that is required. The UK, like the United States, must start bracing for massive reruralisation and this is going to require a lot more people to do a lot more of the work that Rob, Mark, and Simon have so capably demonstrated in this paper. Conceptually, I think the study underscores the absolute importance of vegan diet to future discussion of food system resilience in Transition communities. I have started a blog that will be exploring this theme in much greater detail in the year ahead and look forward to constructive discussion on this aspect of the authors’ thinking as their time allows. By way of introduction, here is my bio and my overly ambitious first post.