« Dates for the Diary: the 2010 Transition Network conference(s)
Matters Arising From The Great Freeze of 2010 » 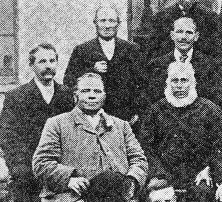 Transition Network is looking for new Trustees.  We are looking for people who want to help support the organisation and the growing movement, as well as represent the diversity of the movement.  The following text sets out how Transition Network functions, as well as the qualities we are looking for in new Trustees.  Do have a think in your initiatives if there is someone you would like to nominate, or if you feel you would like to stand in your own right.  For the right people, this is a great opportunity to become more actively involved in the future direction of the Network.

Transition Network was set up in 2007 to support, inspire, encourage, connect and train the emerging Transition movement of community-led responses to peak oil and climate change.  A charitable company based in Totnes in Devon, it currently employs 7 people, some full  and some part time.  A wide network of many hundreds of initiatives within the UK, and also around the world, Transition has become a vibrant, fast-growing and highly innovative social movement.

The objects of Transition Network, as set out in our Charitable Status, are as follows;

The promotion of the conservation protection and improvement of the natural environment and prudent use of natural resources for the benefit of the public by:

The promotion of sustainable development (as per definition) for the public benefit by:

The board of Transition Network is currently:

William Lana: co-founder of GreenFibres, the organic textiles company, and Chair of the Soil Association’s Organic Textiles Standards Board.

Rob Hopkins: co-founder of Transition Network and author of ‘The Transition Handbook’

Peter Lipman: Chair of Transition Network and the Centre for Sustainable Energy and Policy Director of Sustrans

Julie Richardson: Director of the LandScope Project of the Dartington Hall Trust

Ben Brangwyn: co-founder of Transition Network with a background in the computer industry.

The Board is also complimented by Naresh Giangrande and Sophy Banks, as contributing observers representing Transition Training.

This was an initial Board chosen to get Transition Network established.  It has successfully steered Transition Network through the stages of being set up, becoming a formal organisation, securing initial funding, and developing an effective and well run organisation.  Now, with the recent passing of Brian Goodwin, and with up to four of the Trustees set to stand down, and Transition Network is looking for between 4 and 7 people to take their place, to broaden the skills base of the Board, to make it more representative of the Transition movement and to take it forward into the future.

The Process for Appointing New Trustees

Transition Network doesn’t have a formal membership, so  can’t use a voting based process in the way that membership-based organisations do.  Instead we have designed a process with the following stages;

We would like to invite nominations for new Trustees by Friday 12th February 2010 at midday. Announcement of the final new Trustees will be made two weeks later.

All trustees should meet the following general requirements

We are currently looking for trustees who, in addition to the above have some of the following

Trustees will be selected who complement existing trustees in order to provide a diversity of experience and outlook. The principle criterion for the Appointments Panel will be the creation of an effective and  well-balanced Board.

The statutory duties of a Trustee

All trustees are expected to:

Board meetings are held on a weekday morning, usually at the Transition Network offices in Totnes, but occasionally in Bristol, and usually last around three hours. They are also attended by the senior management team, and any other members of staff where appropriate. Expenses are reimbursed.

Contact Transition Network on 05601 531882 or email the Chair of Trustees at  peterl (at) phonecoop.coop.

Totnes is some way to travel for many involved with TT’s. Bristol is not so far, but still based in the West. The proposal for week day morning meetings may reduce the number of applicants. Is there any chance that board meetings could be by video link, which would enable a wider range of applications? This would decentralise the network more. Perhaps a percentage of applicants should be encouraged from other areas of the UK?

You’re clearly not superstitious, but I must point out that the deadline of Friday 13th February 2009 is somewhat expired!

Ah yes… well spotted Mr Chamberlin. The incisive and insightful skills for which you are so highly revered… amazing that I ran this part about 5 people and none of them spotted the date blooper. All the more reason why we need new Trustees!
Thanks

You also missed out proofreading from the person spec 😉

From Shanghai China: You Brits, Rob in particular, and TT in general, are doing a terrific job, prototyping for the world what is needed NOW. If you’d like a pro bono advisor on strategy execution who is obsessed with climate change solutions, I’ll be happy to be of service to you, virtually, or via skype video.
check out the Comprehensive Framework for Resilient Sustainability, which includes a methodology for strategy execution….
http://docs.google.com/leaf?id=0B0NdbqiXpgrDYmU1NmU3M2MtN2NlNy00ZjVjLTg0ODYtNzI2M2FjOTRiYTRi&hl=en
Cheers,
Irv

Have you concidered having a representative of the Transition Network in another country??
As you no doubt know, here are a great deal of us transitioners living outside the UK, who’d like the oportunity to get involved more…..

Some excellent points in this discussion.

Could you envisage Board meetings in London with some external members by audio or video link?

You might have some Board members who need frequent contact with the others and the Totnes staff, and some who don’t.

Loosening the Totnes-centredness of the Trustees would help its strategic role.