Dates for the Diary: the 2010 Transition Network conference(s) 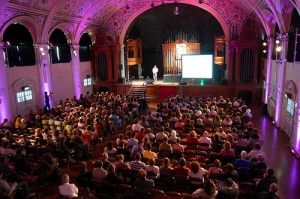 The 2009 Transition Network conference at Battersea Arts Centre, pretty much the only point at which everybody sat in rows...

Lots of people have been asking for the date of the 2010 Transition Network conference, so here we go.  The good news for 2010 is that there will be not one but two UK Transition conferences!  The first will be held at Michael Hall School near Forest Row in Sussex on the 29th, 30th and 31st May 2010.  The theme of the conference will be ‘Broadening’, taking the Transition approach wider and deeper.  Being based near Forest Row, one of the earliest UK Transition initiatives, gives the opportunity to experience first-hand the amazing local food systems already in place there.  The second conference will be in Scotland, hosted by Transition Scotland Support, later in the year (s0metime October/November). The theme for that will be ‘Deepening’, and dates are to be confirmed.  More information, such as times, accommodation, prices and so on, will be made available soon.  Watch this space or the Transition Network website.

We look forward to welcoming you all here. This is the venue: http://www.michael-hall.co.uk/

Will Forest Row accept Lewes Pounds in payment for goods at this event? See you in May Mike.

If the film society show any films over the course of the weekend, I’m sure we’d take Lewes Pounds!

Hoping for a residential/camping venue?

This post was mentioned on Twitter by robintransition: Time to put the 2010 Transition Network conference in your diary! http://tinyurl.com/ykyqwyl…

Did you know that there will be a third one in Germany?

Dear friends from transition initiatives all over Europe,

we are planning a “European Transition Town Conference” as a camp for
next year. It will happen from wednesday, may 19 to monday, may 24,
2010. We invite people from Transition Town Initatives and those
interested in the Transition Town Movement from all over Europe to
gather in spring 2010. The camp will be held in the ecovillage of Sieben
Linden in northern Germany – an impressive example for a newly built
resilient village. (www.siebenlinden.de)
About 150 activists from Transition Town Initiatives from all over
Europe will come to share their experiences, learn new methods and get
to know each other.

For more detailled information about the conference, please look:
http://www.siebenlinden.de/content.php?p=9965

It is possible to ask the EU for a Grundtvig-grant for the conference –
that grant includes the course fee, a lump sum for food and lodging and
the travel expenses. But you have to apply soon! (In Germany, the
deadline is january 15th, but it can differ from
country to country. For more detailled information about the funding,
please check: http://www.siebenlinden.de/content.php?p=9971)

That’s why we ask you to spread this news in your networks as soon as
possible and to ask the people that might be interested to preregister
and to apply for the funding. It is a unique possibility to participate
in an interesting conference about the transition movement, to get to
know the ecovillage of Sieben Linden and to share your experiences with
other initiatives from all over Europe! And all that – if you get the
funding – without any costs!

We are looking forward to meeting you all in Sieben Linden!

Dark Optimism » Blog Archive » What three technologies would you take with you into a lower energy future?
31 Jan 5:28am

[…] For those who are interested, details of this year’s Transition Conference(s) can be found here. […]