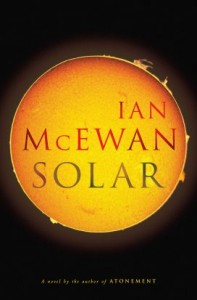 With the recent exoneration of Phil Jones in the UEA ‘ClimateGate’ kerfuffle, the key lesson emerging from the whole thing is not that the science of climate change is somehow profoundly flawed, but rather that scientists are flawed human beings rather like the rest of us, subject to pomposity, ego, vanity, ill-temper and rudeness. The world of science and academia doesn’t always function like the ego-free collective pursuit of knowledge it is meant to, it can be obstructed by those beligerently trying to boost their reputations and funding streams.  ‘Solar’ (the first novel I’ve read for a while) is a superbly executed journey through the world of one (fictitious) eminent climate scientist, warts and all.  It is compelling, gripping, hilarious and informative, and definitely well worth the read.

The main protagonist is Michael Beard, described as “a Nobel Prize-winning physicist whose best work is behind him”.  The opening sentence also adds that “he belonged to that class of men – vaguely unpreposessing, often bald, short, fat, clever – who were unaccountably attractive to certain beautiful women.  Or he seemed to believe he was, and thinking seemed to make it so”.  Many years before, Beard won the Nobel Prize for his ‘Beard-Einstein Conflation’, since when he has traded on his reputation, travelling the world, getting huge fees for public speaking, lending his name to eminent letterheads and leading, in spite of his own lack of conviction on the issue, a climate change research centre.  He is married to his fifth wife, the previous four marriages ending due to his compulsive philandering, but he finds himself in the unfamiliar situation of his present one unravelling due to her having an affair, a situation he finds intensely uncomfortable.

Just when his life looked like it was set on a straightforward path of free lunches and being revered as an eminent scientist for the rest of his life without the need to do very much actual science, his personal life and his professional life collide tragically and somewhat messily and he finds himself emerging in the position of being able to reinvent himself as Beard the Planet Saver.  I have never reviewed a novel before, so I am aware that I am walking a thin line between trying to tell you about the book and not wanting to give the story away!

In the book, we accompany Beard on his well-paid lecture tours (including a hilarious section where he tries to finish an inspiring talk to a hall full of hedge fund managers in spite of the smoked salmon sandwiches he ate 15 minutes earlier deciding that they are not going to stay put) and a trip to the Arctic Circle to see the impacts of climate change for himself.  Being a somewhat lazy, self-obsessed, cynical, overweight man, he is content to spend most of his time in the research station drinking wine and fantasising about the women on the trip than actually doing any research or allowing himself to be moved by the experience.

Beard, as the central character of the story, is not really likeable, being driven more by his appetites, for food, women and for adulation, than for any heartfelt concern for humanity, but he is fascinating, his inability to tell anyone that he loves them is in many ways part of his undoing.  I was reminded of George Monbiot’s excellent recent column where he looked at the gulf between scientists and the rest of the world, and how scientists often live in a bubble from which they view the rest of the world with weariness, that somehow actually explaining their research and ideas to ordinary folks is beneath them.  He wrote;

…”science happens to be the closed world with one of the most effective forms of self-regulation: the peer-review process. It is also intensely competitive, and the competition consists of seeking to knock each other down. The greatest scientific triumph is to falsify a dominant theory. It happens very rarely, as only those theories which have withstood constant battery still stand. If anyone succeeded in overturning the canon of climate science, they would soon become as celebrated as Newton or Einstein. There are no rewards for agreeing with your colleagues, tremendous incentives to prove them wrong. These are the last circumstances in which a genuine conspiracy could be hatched”.

Beard inhabits this world, of tiring of others who aren’t scientists (unless he can sleep with them), having little patience with having to explain his ideas, seeing the rest of the world who don’t have science PhDs as rather stupid and dull and feeling threatened by the bright young things coming up with new ideas (referring to the as the ‘ponytails’).

Is this a book that will convert waverers and sceptics to climate science, or bring doubt to the minds of the convinced?  The climate science in the book is more than just a backdrop, McEwan has clearly done his homework and is personally very much motivated by climate change as an issue.  The list in the acknowledgements of climate scientists he spoke to while researching is impressive, and he communicates the science well in sequences where Beard is attempting to convince others of science that he knows well but can’t quite bring himself to get especially emotional about.  This isn’t in any way the Great Climate Change Novel, more a compelling story with climate change as the backdrop, but one might hope that Beard’s journey from waverer to advocate might rub off on the reader.

Parts of ‘Solar’ had me laughing out loud, and I was gripped to the end to see what comes of Beard as the many chickens of his life come home to roost as the story unfolds.  As a character, he is all too believable; although he understands climate science, he has little patience to actually explain it to anyone, one of the big problems we face in the real world of climate change.  I would highly recommend this; great book, gorgeous cover, a compelling read, with climate change not debated but taken as a given.

Great review! I am out ot pick up a copy – really like McEwan’s past work and look forward to Solar.

You have an understated way and a real talent with reviewing books!

I need to get my hands on this book.

Being a scientist myself (not climate science) I will likely struggle with his characterizations if they dont pass the “laugh test” in a way that pops my brain out of the illusion of the story.

I will definitely give it the benefit of the doubt.

I wouldn’t attempt a review, but my take was that this was a darkly satirical book, half appalled and half amused by the failure of even a Nobel Prizewinner to do anything about climate change. Its quite hard to believe in Michael Beard (although one does come accross some alarming professors from time to time and Ian McEwan has obviously had his fill) but he does horribly stand for us all: not yet very likely to be able to control ourselves.
That’s the book. Transition is something different!

You have an understated way and a real talent with reviewing books!

I need to get my hands on this book.

Being a scientist myself (not climate science) I will likely struggle with his characterizations if they dont pass the “laugh test” in a way that pops my brain out of the illusion of the story.

I will definitely give it the benefit of the doubt.