An April Round-up of What’s Happening out in the World of Transition (now with added film clips!) 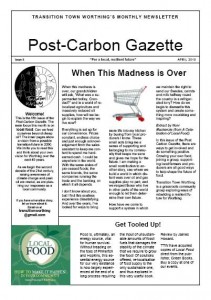 Here is this month’s snapshot, derived from stories picked up through GoogleAlerts and lovingly compiled by Helen (to whom many thanks…), of some of what is afoot out there in the Transitionsphere.

Firstly check out the latest edition of Transition Town Worthing’s excellent ‘Post Carbon Gazette’, and Transition City Lancaster (who have their Unleashing next week!) have produced the ‘Lancaster Transition Times’, a newspaper distributed to over 20,000 homes in the area.  Over in Canada, TT Barrie has been supporting their local Ecofest Barrie and will host a Transition Oasis where people can relax, discover and celebrate healthy sustainable lifestyles with unplugged music, refreshments and reskilling classes.

Down to the US, and TT Manchester hit a target when they sold 350 fruit trees in support of the 350.org campaign…and now they’re wondering how they’ll plant them all. Volunteer helpers are urgently needed please! More tree planting by TT Bandon and Bandon Tidy Towns where 100 trees were planted with the help of students, and then fruit trees have been donated to local schools to plant on their premises. Great! And here is the USA’s 62nd official TT… Congratulations TT Putney…

Onwards and south eastwards to Australia, there’s news from TT Blackwood about farmers’ markets, carnivals and bulb exchanges (that’s light bulbs, not garden bulbs…), and TT Kenmore has been busy with permablitzing, a fantastic idea that seems to be spreading fast through Australia…and beyond? Find out here!  Also in Oz, Clare Power (of Blue Mountains Transition) and Sue Morrison (of Climate Action Now, Katoomba) visited Bathurst in central New South Wales, Australia recently to attend a public meeting organised by Bathurst Community Climate Action Network (BCCAN) where the movie In Transition was shown. Before the meeting, Clare and Sue described the origins and aims of the Transition Town movement in the short film below….

The launch of the Hawick Pound in Scotland got lots of media attention.  ‘A Greener Hawick’, the 137th official Transition initiative, have clearly been inspired by the experiments in Stroud, Lewes, Brixton and Totnes. The BBC had some great pics of the launch, and here is a short film created by the group themselves of the event.

South west to New Zealand, we have TT Timaru’s own Steve Earnshaw in the Timaru Herald to talk about how he walks the talk. And now for some Berm Bombing! I just LOVE this…but please, for those of us not in New Zealand and so perhaps not in the know…what is a BERM? Can’t wait to hear! Also in New Zealand, Transition agitator supreme James Samuel recently sat Susan Krumdieck down in front of a camera and talked to her about Transition and engineering….

Transition is stirring in Austria if this film is anything to go by, and the following clip, I think, is a piece from German TV about Transition in the Netherlands….

Now we head over to the UK where there’s been lots of tree planting… Taunton TT helped launch the ‘Tasty Borough’ project, which is planting traditional apple trees – a long time part of Somerset’s culture – to replace all those uprooted in the past, while TT Finsbury Park is bringing fresh food to their travellers by planting fruit trees at their local rail station (love it!), and three Transition Towns are working with the London Orchard Project to convert London (well, bits of it anyway…disused car parks and other deserted spaces) into orchards so passer-by can help themselves to a fruity snack… Fantastic!  Transition Town Leek (near Stoke on Trent), have been planting apple trees too.  TT Louth is busily turning all available spaces into organic community gardens to grow food for sharing and to inspire people to grow their own fruit and veggies while also re-skilling in food production.  All this talk of community tree plantings gives me an excuse to show you this again, even though you have probably already seen it, but it is such a lovely film (you can find a high res copy of it on the double DVD set of ‘In Transition 1.0.’.

TT Finsbury Park has been up to other exciting community projects too: they’ve been asking people to send in one-minute video clips of places and things that are locally meaningful to them to use to celebrate the Finsbury Park area. TT Kingston together with Artgym have organised a similar project – re-visioning Kingston – which brought together different generations to express their stories through creative arts. And as part of Kendal’s activities towards becoming an official TT, the South Lakeland Action on Climate Change group has just opened a telephone line for information about growing your own fruit and vegetables.

The Civic Hall in Totnes is about to be turned into a giant eco-electricity generator with the installation of £50,000 worth of solar panels on its roof as part of TT Totnes’s Transition Streets project. TT groups in Dorchester got together for a mini-conference to share experiences and discuss Transition topics, and TT Inishowen held a well attended DIY Solar water heating workshop followed by a screening of ‘In Transition 1.0. TT Taunton is providing novice cycle training as part of efforts to get people out of their cars and on to their pushbikes… Great! And only £5…It’s a bargain! And feet are great too… as lovely Stephanie Bradley will tell you as she walks around the UK in flip flops, gathering your Transition Tales on her way. We miss you so much Steph! Watch out for her as she Transition-Tales her way through your own Transition Town, gathering and telling stories.

The Churches in Transition, a project of Christian Ecology Link that seeks to network and represent the increasing number of Christians involved in TT projects, has now officially partnered with Transition Towns. And below is a film of an interview with Eco Councillor Alexis Rowell of TT Belsize, author of the upcoming book on how Transition initiatives can best work with their local authorities, chatting about how faith communities fit into TTs.

More congratulations to TT Kingston for winning yet more awards! They recently won their local Kingston Green Guardian Awards, and now they’re achievements are being recognised more widely as they’ve now been judged the best green group in South London!  And here is a short film about their organic vegetable box scheme…

Have a great month and we look forward to hearing about more of your inspiring activities and wonderful events to get the world on the path to Transition!  Don’t forget you can keep up to date with Transition news stories by subscribing to the Transition Network Newsletter…

Round up of what’s happening around the world in Transition — with added film clips « Transition Town Farnham
15 Apr 7:45am

[…] to the very impressive round up of some of what is happening in the world of Transition this month: https://www.transitionculture.org/2010/04/12/an-april-round-up-of-what’s-happening-out-in-the-world-of-… There is too much to watch and read it all, but it is definitely worth a browse of the Post Carbon […]

An April Round-up of What’s Happening out in the World of Transition « Transition Town Whitstable
16 Apr 3:56pm