« A Report from the Launch of the Totnes Renewable Energy Society
What Can Communities Do? My Contribution to the Post Carbon Reader »

More Reflections on the Big Society: from the Development Trust Association conference. 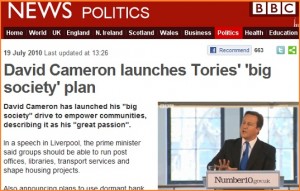 I spent yesterday at the Development Trust Association (DTA) conference at the Derby Assembly Rooms.  A fascinating day, including an interesting look at Development Trusts globally, participating in a workshop about Low Carbon Communities, and meeting some fascinating people, as one always does at such events.  The highlight for me though, and something of interest given recent discussions here at Transition Culture, was a debate about the coalition government’s ‘Big Society’ agenda (see the end of this piece for an event Transition Network is running soon to explore its implications).

I was on a panel with Steve Wyler, DTA’s Chief Executive, Claire Gilhooley, CEO of Cambridge House, Adam Wilkinson, CEO of Derby City Council and Claire Dove of the Social Enterprise Coalition, and the main speaker was David Prout, Director General of Communities at the Department of Communities and Local Government (see right).  David spoke for about 30 minutes, and then each of us on the panel had a minute to respond before a wider discussion.

David Prout, although clearly a nice guy, did not make the best salesman for the Big Society.  It wasn’t really a passionate defence of a concept which had, over the time of the conference, generated a fair amount of distrust, disquiet, intrigue, if not downright hostility.  What follows is composed from my notes, starting with some bits from David’s talk and then some highlights from the discussion that followed.

He began by praising the work of the DTA, and his gratitude for their input into the work of DCLG.  The government, he said, believe very much in the importance of bottom up engagement.  He started though, by setting out the context within which the government sees the Big Society agenda, that of the huge deficit faced by the country.  Levels of borrowing are frightening and need to be reined in, he said.  For every £100 spent in the private sector, £25 has been borrowed.  This administration has committed to tackling the deficit, and reining in the huge levels of borrowing.  What it is looking at though is not, he said, actually cuts, rather it is stopping increases in spending, ‘flatlining’ government spending over the next couple of years.

In this context, the Big Society is seen as the desired outcome, it is about changing the way we govern, how power is allocated, offering more freedom and responsibility, moving away from a ‘them’ who do things to communities, to communities taking more responsibility and ownership.  It is about shifting more decision making and power to those affected.

Then each of the panel had a minute to respond.  Some were critical of the government’s interpretation of the financial crisis, that there has been no meaningful attaching of blame to the banking sector that caused it in the first place, and which is already back giving bonuses and carrying on much as before.  Some argued that the cuts would hit the poorest first, and that it was disappointing that the voluntary and community sector hadn’t been consulted on the Big Society.  I said that it was bewildering how a government calling itself ‘the greenest government ever’ thought it could adequately tackle climate change by devolving power to local government, giving them more responsibility for planning decisions, when actually local councils are usually the block to renewable energy projects.

This point led to a fascinating response from David Prout.  He said that at the moment what happens is that windfarms are often routinely refused planning due to the ideological stance of the Councillors, and that they are, as he put it, “playing to the gallery”, keeping their political allies happy, but safe in the knowledge that their decision will be called in and reviewed by the Secretary of State.  They make decisions in this irresponsible way, but, he argued, the best way to deal with this is to devolve decision making to them so that they have to learn to take responsibility for their actions.  It needs a long term process of increasing maturity which will force them to think about the long term issues.  Government can either, he said regulate, or it can change the way in which government works.

This exchange somehow embodied for me the way in which the Big Society feels really unthought through.  Are we really saying that climate change, and the need for a wartime mobilisation scale of response needed, the government’s commitment to increasing renewable energy generating capacity from 3% today to 15% by 2020, the bulk of which will come from wind, half of it onshore, will actually happen by the decisions being delegated to Councils ideologically opposed to wind power?  Surely climate change is an area where strong central government is vital, and such delegation is actually deeply dangerous.  Although the Big Society has many elements that could lead to increased resilience at the community level, it is couched within a context that appears to have little likelihood of achieving the scale of response necessitated by climate change.

Closing the session, DTA Chairman Michael Pyner offered a passionate response.  He said that many of those in the DTA feel angry about the way the Big Society has been designed, but remain keen to help.  He used the analogy of the Catholic Church, and the way in which the church has spectacularly failed to take on the level of anger people feel about the sex abuse scandals.  There are huge dangers, he argued, in the Big Society’s potential to polarise society, in the same way the Thatcher government did.  Many of us lived through the years of the Thatcher government, he argued, it destroyed communities and polarised societies, and none of us want to live through that again.  The DTA exists to do what it can to avoid that happening, we have concerns, but if it could be made to work it would be fantastic.  What government ministers need to understand, he said, is that this movement could either respond with great passion, or else it will oppose it.  It would far prefer to be working constructively with government, but if it continues to find itself sidelined, it will refuse to engage with it.  However, it remains hopeful of a constructive dialogue.

And that was that.  Beautifully captured the sense of “well on the one hand”, “yes but on the other hand” that was found among the delegates.  Fascinating stuff.  If you would like to further engage in exploring the potential interface between Transition and the Big Society, here is an invitation to a day Transition Network is holding on September 29th for which there are still some spaces available.

As the Conservatives begin to roll out their flagship initiative ‘Big Society’, we’re very keen for people involved in Transition to join Transition Network and others for a workshop to explore:

(a) what this policy is likely to mean in practical terms for communities and those working with them,

(b) whether we should

What people in Transition Network have learned from politicians and civil servants involved in the policy is that:

This workshop will examine Big Society’s implications and associated threats and opportunities and discuss how we respond to it. The initial output from the workshop will be a paper drafted by Transition Network drawing on the consensus or diverse voices in the workshop, and intended to ensure we are not derailed by Government policy, but remain as aware of the political environment as we are of the ecological and economic environment.

We’ll send out further communications regarding how the day will run – our intention is to make it collaborative, stimulating and driven by the need to provide Transition Initiatives (and other community initiatives tackling similar challenges) with meaningful actionable material, and with a collective or diverse range of perspectives, to help us all coordinate our responses.

If you plan to attend, please RSVP by email to Sasha Nathanson at Transition Network – sasha (at) transitionnetwork.org.

If you can’t make it and know someone who should, please let Sasha know their details and we’ll contact them directly. Bursaries are available to those who need help with travel expenses.

For further information about this event, please contact Transition Network on 05601531882.

For further information from the Govt about the Big Society please see:

For Transition and other commentary on the Big Society please see: