Transition as a Pattern Language: The ‘Project Support’ concept 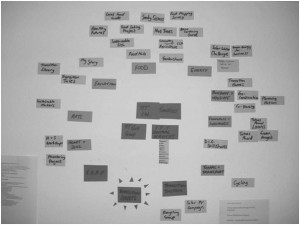 Well yesterday’s first one went very well, some great comments, thanks all.  Today’s pattern is about the Project Support concept.

This pattern is a key part of BECOMING A FORMAL ORGANISATION, offering an underlying principle designed to ensure that the key focus of the initiative is its WORKING GROUPS and PRACTICAL MANIFESTATIONS and the role of the rest of the organisation is to support those.

If a newly formed Transition initiative feels that its role and purpose is to be responsible for the implementation of every aspect of Transition, it will be rapidly overwhelmed, and collapse under the burden of trying to do everything.

One of the things that distinguishes the Transition approach is the concept of the Project Support Project (PSP). This is the idea that the role of a Transition initiative isn’t to do everything itself, to become a developer, a bank, an energy company, landowner, training organisation, and so on. Rather, its work is to support the energy to make things happen, and to support the emergent projects, as well as being to structure itself so that, as much as possible, it enables and supports those developing the projects on the ground.

A case study in how Transition Town Totnes is structured might be useful at this point. Initially, for the first couple of years, there was a core group made up of one person from each working group. When the organisation reached the stage of having funding for an office, a representative of the office team also participated in those meetings. When TTT started to attract funding for different projects, it needed to become an ‘official’ organisation, yet wanted to ensure that it still embodied the Project Support principle into that structure. After much consideration and designing, it came up with a model with the following elements:

Core Group: meets monthly, is the main body that decides direction, priorities, day-to-day issues and plans events.
Trustees Group: also meets monthly, but is responsible instead for the support services of the organisation, for fundraising, financial management, recruiting and supervising employees, ensuring that the organisation’s activities are in keeping with its Memorandum and Articles, being ultimately where “the buck stops”.

This works very well, leaving the projects to set direction, but ensuring that they are adequately supported and provided with what they need. There is good interaction between both bodies, each organisation is always represented at the other group’s meetings. While this exact model might not work for everyone, the principle of being an organisation designed to support projects is key to the Transition approach.

See your Transition initiative’s role as being to offer ‘project support’, to put in place the organisational infrastructure to support projects as they emerge. Seek to provide an over-arching ‘umbrella’, a common sense of purpose, supported by administrative support, publicity and fundraising. In this way, a Transition initiative becomes a catalysing, inspiring and enabling organisation, rather than actually carrying out projects itself.

One of the key decisions to be taken by your initiative will be about HAVING AN OFFICE OR NOT?. Is supporting your projects best served by having a dedicated space, or not? When planning how you will embody the Project Support concept, it is also worth bearing in mind how you will involve VOLUNTEERS. You will also need to consider how you intend FINANCING YOUR WORK, as the amount of income you will receive from grants will, in turn, determine the kind of legal structure that you need to have.

Categories: The 'Heart' of Energy Descent, Transition as a Pattern Language