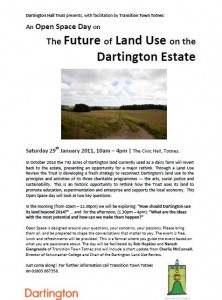 It’s been a while since Transition Town Totnes ran a big community Open Space event, so it was great to facilitate an event on Saturday which focused on the question of how Dartington Hall Trust should use its land beyond 2014.  Dartington is one of the major landowners adjoining Totnes, and it has been engaged with the Transition process here since it began.  In June 2007 an event called ‘Estates in Transition’ brought together landowners from across the South West to look at how their land management might change in relation to peak oil and climate change.  At present the 742 acres of farmland on the estate is leased to a dairy farmer who retires in 2014, so a Land Use Review has begun to begin planning what happens next.  I represent TTT on the Review, and one of the things I offered was to facilitate an Open Space day in the town to get the views of the community. 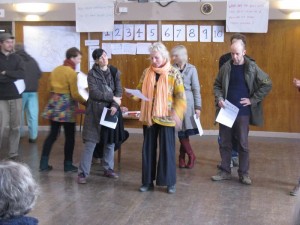 The event was facilitated by myself and Naresh Giangrande, and began at 10am.  At 3 minutes to 10, only person had arrived, and we were getting slightly anxious, but by the time we got underway at 10 past, over 70 people had arrived.  I welcomed everyone, explained how TTT had held a number of these events throughout its history and how fascinating it was to look back over them and see how many of the ideas raised had actually come to be realised, because unlike a standard consulation event, Open Space encourages people to voice and explore what they are most passionate about, and to make connections with others who share that passion.  Charlie McConnell, Director of Sustainability for the Trust, introduced the Review and said that it was a genuinely open process, that no decisions have yet been made, and that the Trust was very keen to hear thoughts, ideas and suggestions.  Naresh then outlined how Open Space works, and then we were off. 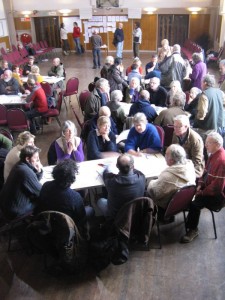 Two sessions in the morning, then a great lunch for everyone attending, and then one more session in the afternoon.  The content generated at the day is being typed up and I’ll post the notes when they are available.  The day closed with a closing circle about how the process was for everyone.  The Dartington staff who were there talked about how it had been a fascinating day, with a quality and depth of engagement that they really appreciated.  Members of the community were also able to talk about how refreshing it was to be able to engage so positively and equitably with representatives of the Trust, and how there was a deep consistency to the ideas that emerged from the Open Space process. 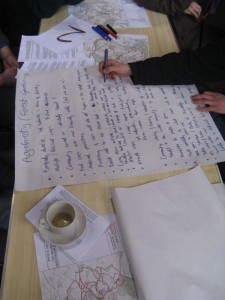 While one might argue that the event being facilitated by TTT might have skewed the views that were put forward, it was also the case that the event, and the Land Use Review, was on the front page of the Totnes Times that week, and there were a number of new faces at the event too.  There was a common thread of enabling community access to land, natural building using local materials, agroforestry, education and the arts, but also a sense that all these things overlapped and interweaved.  Hopefully some of the ideas will move from “Dartington really ought to….” to people coming together and putting in firm proposals for clearly thought-through ideas. 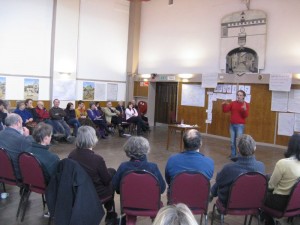 The day really refreshed my feeling as to the power of Open Space.  It is a process that creates something much more than the sum of its parts.  One group for example, explored the question as to whether people who live adjoining land owned by the Trust might be able to take on long leases in order to develop them as community allotments, community orchards or whatever.  In the group were people who understood legal structures, leasing possibilities, and they were able to sit with a member of Dartington staff to look at what kind of models might be possible. 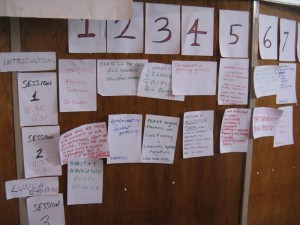 This sort of interchange and the empowerment of something that has just been an idea looking actually obtainable is one of the great strengths of this process.  My thanks to Dartington for being so open to participating in this way and to everyone who brought their passions and great ideas to this event.  And to Pauline for the fabulous soup, and to Vanessa who bravely offered to type up all the notes generated by the event.

yes, it was a quite remarkable event, the first time I’ve felt that Dartington was, is, open to listening….many thanks to everyone for contributing and Rob and Naresh for facilitating

Really interesting paralells with what the National Trust on the Lizard in Cornwall are doing with their farm on the doorstep of the Lizard village see http://www.tregullasfarm.org.uk
Perhaps open space there next?