« A January Round-up of What’s Happening out in the World of Transition
Social Enterprise in Action two-day workshop, Totnes. »

How might we reminisce about the Age of Oil and Debt? 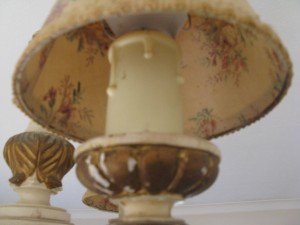 My aunt just moved house, and her new place contains many fixtures and fittings that almost certainly date from the early 1960s, which are, to say the least, rather dated.  There are those things in front of lights that look like a heavy glass ashtray, and a wide range of lampshades for which I feel pretty sure there is no highly valuable ‘retro’ market on Ebay.  One in particular got me thinking.  Modelled on what people presumably imagined lamps were like before electricity, it is a great clunky wooden thing with 4 arms, each of which has a ‘candle’ (a light bulb) on the end.  What I thought was fascinating was the detailing.

This was manufactured and bought at a time when, one would imagine, people were delighted to have moved away from candles and oil lamps, from soot and dust and from wax dripping all over the carpet to electricity which was clean, bright and cheap.  Yet on this lamp, the plastic around the bottom of the bulb is moulded to look like dripping wax.

I thought this was fascinating (of course regular readers may suggest I should get out more).  Why, when designing a new cutting edge technology which supposedly was a great improvement all round on what had gone before, did the designer need to make it look like what had gone before?  And why did people choose them?  We still do it today I guess.  You can set your iPhone so that it has a ringtone that sounds like a 1950s phone and people still buy gas fires that look like coal ones. 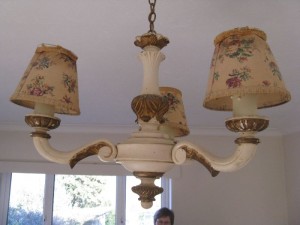 It reminded me of a talk I went to by someone from Toyota, talking about the next generation of electric cars.  He said that one of the problems people have with electric vehicles is that they are completely silent.  Firstly people don’t like it because, in some situations, it can be dangerous because people don’t get out of the way, but also because often people actually ‘need’ a car to make a noise.  As a result, they are looking at having a sample of a car revving its engine that could be played through speakers under the bonnet.

I wonder how, in a powered-down world we might reminisce about the age of mega consumption, high energy use and vast debt we live in today?  Might clubs of people, known as ‘petrolheads’, organise events where they wheel the last few remaining carefully tended cars out of garages, a bit like the vintage car rallies we see today, and use small amounts of petrol to recreate traffic jams?  All squashed into a small bit of road somewhere, revving their engines and sitting back with the windows closed listening to the radio?

Perhaps people will recreate the experience of transatlantic flight by going to the local theatre where they enter a bit box and watch films for an hour in uncomfortable seats, during which time the set on the stage is changes, and a group of actors all pretend to be New Yorkers and they all then role play a shopping trip to New York.

Perhaps local food shops will, given the demise of the supermarkets, hold days when they try and make the shopping experience as much like shopping in supermarkets had been.  Maybe there will even be a local ‘Superstore Re-enactment Society’ who have lovingly preserved old shopping trolleys, keeping them oiled and making sure the wheels still all go in different directions like they did in 2011, and they are allowed to take over the shop for the day and put ‘2 for the price of 1’ posters everywhere.  The highlight of their year is the ‘Sales Re-enactment’, where local rivalries and feuds are fought out as a crowd of people try to elbow each other as much as possible in a new competitive sport (points awarded for each successful elbow or shove).  We might also still have those food dispensing machines, but filled with local food and treats, but still serviced and used because people still love the whirr and the ”clunk’ of their chosen treat dropping to the bottom for collection.

Perhaps people will buy ‘Made in Bangladesh’ labels to sew into their clothes, even though they are all now actually made up the road, just to reconnect with the possibility of far-travelled clothing. 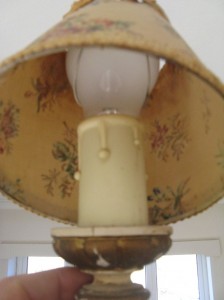 Perhaps there will also be ‘Lawn Clubs’, historians who are very knowledgeable about the role of lawns through history, who carefully tend the few small patches that remain (given that food is grown pretty much everywhere else) and offer tours of them.  They specialise in types of grass and talk in hushed tones and nerdy reverence of a time when carefully tended lawns covered acre upon acre.  They communicate through websites like ‘greatlawnsofhistory.com’ where this once revered form of land use is discussed in chatrooms and where the cultural role of the lawn in 20th century life is endlessly probed in erudite articles by academics.

There is so much today that we take for granted as just how things are, but when things aren’t like that any more, and we live in a lower energy more localised world, what else might we nostalgically hold on to or design into our new world in order to keep a connection to 2011?

So much of the Transition idea is about visioning and describing the future as though it were today. With wit and humour, you’ve done it again Rob – you really are a very good story teller.

I think James has hit the nail on the head. You’re a hilarious storyteller Rob: one of my favourite parts of the first edition of the Handbook was your gleefully-constructed news story pastiches on Posh and Becks moving into a passiv-house. Just my sort of humour and ingeniously written. I hope you’re keeping them in the upcoming second edition?

Here’s my own suggestion for how to create nostalgia for 2011 in a more localised world:

RED LETTER DAY
In a similar manner to the tradition of “Trick or Treat” on one day per year, practical jokers will visit other houses in their street dressed as court bailiffs armed with fake court summons letters, demanding all repayment of “credit card” debts. And perhaps beautifully hand-decorated “credit cards” could be exchanged, rather like greetings cards?

I guess the same is true with architecture and mock tudor homes, roman columns on buildings, etc.
There’s always an element of wanting something that has past. People love a real fire, but not the slog of cleaning one out or risking a chimney fire etc.
Good humour and interesting post.
Somehow I dont see modern wheelie bins in the style of those old concrete designs with the wire cage doors and soggy paper bags of old. Some things do move on.
Even photos on digital cameras can have a brown/sepia setting !.

You’ve got me thinking now….
Will I go back to a Black and White telly with 2 channels and having to get off my backside to change station ?
Best to leave it OFF and enjoy life beyond television…

Here in America there was a reminiscence of the age of rail, a time when most people that traveled more than 20 miles spent part of that travel on a passenger train.

The ubiquitous train set may be fading from toy stores, and the club sets and room-sized permanently installed train layouts are still out there, though the active model railroaders have been aging for a generation.

Toy trains are still popular toys, though most are targeted to toddlers, and feature cartoon faces or wood construction, rather than re-enacting steam or diesel locomotives and landscapes.

How will the future hang onto the ‘age of oil and debt’? We will likely need to wait to find what they decide. Predicting a marketing trend accurately is, possibly, one of the presumptions of affluence that will go the way of wood-powered rail.

I’d suggest another reason – deeper than simple nostalgia – for our attraction to certain things of the past (like your aunt’s lamp): They help us reconnect to a time when we felt more connected to each other and the land through simple domestic rituals and routines.

For example, whereas now people spend hours staring into their own private computer screens, fragmenting families during the evening hours, or at a TV set being fed cable programming, it wasn’t so long ago that generations of people spent their free time communicating with each other, or doing activities around the stove or hearth.

In other words, people feel alienated in the modern age and long for artifacts and rituals that connect.

I agree with Alan and there is also the fact that we are just not designed to take in change at the speed and scale at which it is occuring, and we cannot ‘digest’ it, hence artifacts like the aunt’s lamp – perpetuation of the past in a more virtual form.
I’ve just been to a lecture at Schumacher College by Robert Chambers, a delightful man whose expertise is in international development. He said some wise things but also was rejoycing at the recent large-scale adoption of mobile phones throughout Kenya and many other countries, even within populations considered very poor.
I couldn’t help feeling sad at the idea that this might be one more nail in the coffin of traditional African community gatherings – which will now probably be reproduced in tweeter or Facebook virtual “gatherings”…
My neighbour has recently concreted all of his big garden and now spends his time watching nature programmes on the TV.
We are ‘virtualising’ what we have lost and long for…

Mobile phones are a blessing for small African farmers, among others; please be careful about the baby in that bath …
As for the lawns/pastures in general: David Holmgren has something to say about it – as opposed to those glorified tree crops – and it might just come as a surprise to you:
http://holmgren.com.au/DLFiles/PDFs/Apiculture3.pdf

Bit unrealistic, if we had started making a meaningful effort a generation ago we might have the luxury of being nostalgic in twenty years time.
Unfortunately with peak oil, climate change, economic collapse etc already making their presence felt it will almost certainly be a hard powerdown.
For the young particularly whose daily lives will be made much harsher because of our tardiness I would think that supermarkets, busy motorways etc will be seen with absolute disgust.
Bit like the feeling one would have for the ancestor or parent who lost the family fortune.

I think that those who spend too much time being nostalgic for the comforts won’t make it.

Great! Do you think it’s time for me to get a new wood stove that looks like a central heating radiator? Or put some sort of reverse spoiler on my recumbent for that good old against the wind cycling feeling? Take a carrot, boil it for 24 hours and put it back together using bees wax to make it look like a manicured tasteless supermarket one?

Ahh, yes! …and I am on my way to visit a real tree museum. I’m gonna stay in a real tent too, albeit on a high tech air mat 😉
Great story. Love your style.