« How might we reminisce about the Age of Oil and Debt?
Transition Town Totnes in the Observer » 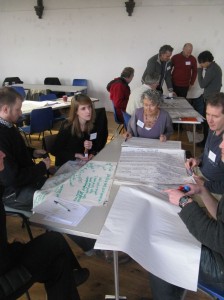 From my experience of going to different events which promote the concept of social enterprise, it is clear that the idea that social enterprise can be used as a driver for decarbonisation and economic localisation is a very small but emergent part of the social enterprise ‘scene’.  It was therefore timely and fascinating to spend 2 days in Totnes last week exploring, in a collaboration between Transition Network, Local United and Transition Town Totnes, the role social enterprise and entrepreneurship might play in building resilience at the local level. 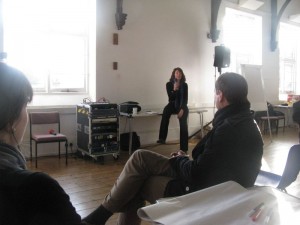 The event was opened by Fiona Ward of Transition Training and Consulting (see right), who organised the NESTA funded event, who asked the question as to whether it would be possible for Transition initiatives to respond quickly enough and at a sufficiently meaningful scale so as to actually be a part of the solution to our economic problems.  The event was in part the first meeting of 10 Transition initiatives (Finsbury Park, Leicester, Omagh, Ipswich, North Howe, Thornbury, Hereford, Manchester, Totnes, Durham) who are part of the Transition Network’s REconomy project, funded by the Roddick Foundation, which is about supporting the emergence of social enterprise in Transition initiatives.  The event brought together people from the initiatives, representatives of Local United, representatives of emerging Totnes social enterprises, ‘partners and critical friends’ (funders and related organisations), as well as the REconomy groups.

Adam Kennerley of Local United then introduced their work.  Local United has brought together 8 social entrepreneurs, whose enterprises can all be linked back to their communities and which work in service of those communities.  In 2010 they contemplated how best to collaborate, and pondered the question of how what they have achieved at the local level might be scaled up nationally.  Local United is a time-limited, output-limited project which is drawing to a close.  One of their key outputs has been the ‘Diffusion Packs’ they have produced (there are 8 of them, and you can read them here).  At the moment, organic/fair trade/ethical is about 10-15% of the market place.  The question, Adam suggested, is could social enterprise do that, and in a very narrow timeframe?  At the moment we don’t have a critical mass, but we need to get out there and build it.  How does Local United overlap with Transition Network, he asked?  What would all this look like if it worked?

I then welcomed everyone to Totnes, gave an overview of Transition and talked about how fascinating it has been, while researching the new Transition book, to hear tales from across the Network of emerging social enterprises.  If we are serious about scaling Transition up in time, then social enterprise offers one of the key tools for doing that, I said. 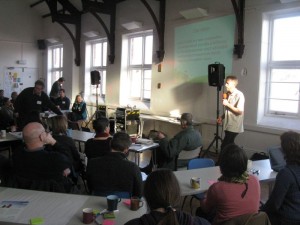 … and in terms of the first question, what do we mean by social enterprise in the context of Transition, the discussion, at least on the table I was seated at, looked first at what social enterprises emerging from Transition might be based on.  It was felt that there is no right answer here, there might never be one, but that what matters at this point is getting on and doing things, irrespective of definitions.  They would be founded on an awareness of peak oil, climate change and what is happening to the world’s economy, and also an understanding of what is the most appropriate scale to work on, and how changing circumstances, especially the price of oil, will change those scales.  It was also felt to be vital to not just see this in terms of new enterprises, but also in terms of supporting existing ones.

There was also discussion of what this emerging new economy might look like.  It was felt that it would be focused around meeting local needs, and be based on a redefinition of ‘profit’, to include social impacts and other wider benefits.  There would be a diversity of ownership models and of scale and business types.  It would not be inwardly looking or closed, and social capital and trust would be considered vital.  It would value technology but also appreciate the value of face-to-face and it would value local resources.  Businesses would be rooted in their community.

After lunch, there was more information about the work of Local United.  It was explained how there are five strands to their work:

Then the authors of each of the diffusion packs stood up and talked about theirs, and briefly gave an overview of what it contained.  This was followed by a session where each of them sat at a different table and took questions about their projects and their tips for replicating such projects elsewhere. 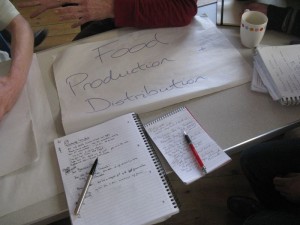 For the rest of the afternoon we sat in groups that represented each of the ten Transition Initiatives, and looked at the specific opportunities for social enterprise in each place, and then identified the needs that must be met to realise these opportunities, and the barriers we’ll need to overcome. We then did some work to draw out the common themes, and this work will inform the next activities of the REconomy project, which will include building many partner relationships with organisations that already out there and looking to support emergent social enterprise.  I had to leave at this point but I am reliably informed that plenty of good conversations were had at the Seven Stars bar that evening.. 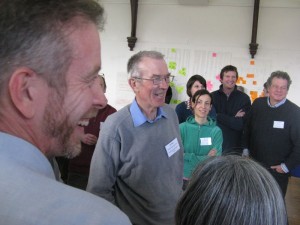 The second day began with representatives of a number of different Totnes emergent social enterprises (some from within TTT and some not) speaking about what they are doing and their plans for the future.  Chris Bird introduced Transition Homes, Ed Vidler of Totnes Development Trust talked about Totnes Healthy Futures, Don Lang spoke of the Self Build scheme he is developing, and the small fishing boat project, Ian Bright talked about the Totnes Renewable Energy Company, and finally Hal Gillmore talked more about how these and other projects hang together in terms of how TTT is imagining the emergent local economy, with additional enterprises like the Food Hub, the ATMOS Project, Totnes Sustainable Construction Company and the Totnes Pound all weaving together.  Each project took questions, and some lively discussion followed.

We did a mapping exercise, inviting people to position themselves along a spectrum of one end of the room meaning ‘very’, and the other end meaning ‘not at all’.  Questions were posed such as “how confident are you that funding is available for your emerging social enterprises if you need it?” and “how confident do you feel that your initiative has within it the skills it needs in order to promote social enterprise?” 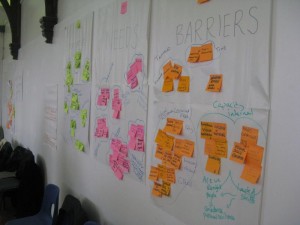 Then there was a more detailed look at the Diffusion packs, with people inputting their thoughts as to the packs as they stand at the moment, and then coming up with lots of useful input about how some of the remaining needs/barriers can be met.  This was followed by a closing round as to how people found the event.  For me, the two days were fascinating and thought-provoking.  As a young movement, most Transition initiatives are at a very early stage in their evolution, so what support would they need to feel confident, supported and inspired in creating a range of new livelihoods to fill some of the gaps that moving towards resilience and localisation would require?  This feels like one of the key questions for the next couple of years, and will open the door to some great innovation and inventiveness.

The REconomy project team are writing up all of the workshop outcomes, and these notes and all the other project resources as they are developed, will be available to everyone at a new project workspace on the TN website. I’ll post the link to this project workspace as soon as it’s ready, hopefully next week.

My thanks to the organisers, especially Fiona, Hal and Helen, to Local United, NESTA and to everyone who attended and supported the event.

Our Transition Initiative in Pombal will start a Social Entrepeneurship Incubator to transform dreams in effective projects.

The idea is to replicate, after a pilot, projects using a very special form of microfranchising…

We`ll follow the developments of what you are doing, learning and sharing with you.

Just a quick thought on financial investment. Has anyone thought of approaching (Kivawww.kiva.org)?
David Lyons

These Diffusion packs are a great idea. Hopefully they will be developed as collaboration between TN and the originators and other interested parties to form a “central” shared resource of use to many groups, rather than fragment into the vast information pool which often seems so daunting.

Very inspiring! Here in KIlkenny I feel a Social,Creative and Ecopreneurship Hub is the way forward… Was not able to get to the recent Dublin Transition towns Collaborative Entrepreurs conf but shared video clips, diffusion packs and skype conferences very helpful!