A Tool for Transition: the Sustainable Communities Act 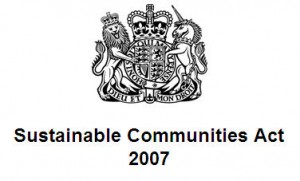 In October 2007 a new law was created. This new law has, for the first time, set up a ‘bottom-up’ process where local people can drive central government action to protect or create truly localised and sustainable communities. It establishes the right for local people and councils to submit proposals for government action. Government is then required not just to consult, but to try to reach agreement on the implementation of those proposals.

This new law is the Sustainable Communities Act. At its core is the philosophy that local people are the experts on their own problems and the solutions to them.

The inspiring story of how it happened

The Sustainable Communities Act only came about because of a five year campaign that mobilised thousands upon thousands of people across the country. The Local Works coalition, consisting of over one hundred national environment NGOs, charities, trade associations and unions, organised that campaign.

At the outset there was strong opposition from government. Local Works organised dozens of constituency public meetings with local MPs. Turnouts averaged between 150 and 200 people, with some meetings attracting 500. MPs were astonished and murmurs rippled through Parliament. When the Act became law in 2007, it did so with full support from all the political parties in Parliament. This was a great success and a victory for grass-roots citizen action.

I spoke at those public meetings and co-ordinated the campaign during those years. There is nothing more inspiring than huge turnouts at public meetings and MPs standing up in Parliament and saying they are voting for something because they have received a lot of lobbying from their constituents. So if you helped the Act succeed I want to thank you from the bottom of my heart. Your action led to real change.

Why the Act is a Tool for Transition

We all know that it is vital that we transition our towns into truly sustainable places, so I will not lecture you about that. Local Transition efforts are very important and valuable. But the simple fact is that, of all the western democracies, our nation has the most centralised system of governance.

Currently central government is very powerful, it controls so many of the levers for change that will ensure transition happens everywhere. Like it or not, that is the current reality. I emphasise current – we can change things, for that is what transition is all about.

The Sustainable Communities Act provides us with a mechanism to make government pull those levers in the right way – e.g. on changing planning rules or transport policy – or even better, to devolve the powers behind those levers down to the local level. That is why the Act is a Tool for Transition.

How you can use the Act

You and your councils can use the Act to submit proposals for government action to promote and protect truly sustainable communities. So you can put forward any proposal, so long as it meets the following two criteria:

1. It requires central government action, e.g. to change the planning rules so that local people have the final say over whether a new supermarket opens, and

2. You can show argument and evidence that it would promote at least one of the Act’s four part definition for ‘local sustainability’:

You can submit your proposal via the government’s new ‘Barrier Busting’ website here. It will help if you can get other groups, or even your council, to support your proposal too.  You may want to wait a little as Rob Hopkins and I are going to be working together to produce and send out a short list of suggested proposals that we think would really help transition continue to happen.

Late last year, the first wave of proposals were negotiated on and agreed. There are some great successes, here are six concrete examples of things that the government is doing as a result of proposals made by local people using the Act:

The government’s response to all the proposals made up until December 2010 can be viewed here.   So the Act has inspired real change and seeded the potential for much more. I hope very much you and your fellow transitioners will use it.

Thanks for reading this. Now I’d like to ask you to please do the following quick and easy things:

1. Sign up for local updates on what’s happening around the Act in your area: www.localworks.org/join

2. Write to your council and urge them to resolve to use the Act by submitting proposals. When they decide to do so they have to first engage and reach agreement with local citizens on what proposals they are going to put to government.

More information and guides can be found at www.localworks.org

This is tremendous! I’d LOVE to see it here in the states. Unfortunately, I know we would have an extremely difficult time advancing this in our community. The reigns of power are tightly, and closely, held.

Although it doesn’t seem quite the intention of the Act, it seems from your description that it could be used to cause the Government to try to reach agreement on the implementation of the TEQs scheme (already the subject of Government interest – http://www.teqs.net/report), which is designed to guarantee that we actually achieve our national emissions targets, while empowering local communities in reducing fossil fuel usage.

What I’m not clear about is who the Government has to try to reach agreement with in the case of national policy suggestions?

What are the implications of: “Government has amended the planning rules to exclude gardens from the classification of ‘previously developed land’.”?

Also, I wonder if this act could be used to enable Local Authorities (LAs) to introduce local traffic calming measures on major routes? At the moment the overall flow of traffic is prioritised over local needs – regardless of how incredibly dangerous, polluting, hostile etc these big roads are. In Finsbury Park people accelerate pointlessly along short sections of Seven Sisters and Green Lanes. LAs can’t touch the layout of major roads and junctions when they’re producing local development frameworks, even though much could be done to humanise them.

I would like to see a change in the law which prevents the holding of a rival market within 6 and 2/3 miles of a statutory market.

Our TI would like to establish a monthly farmers’ market. However, because the hall we would use is only 6 and 1/3 miles away, we’ve been told that it would have an adverse effect on our local market plc, and is therefore not allowed.

This is difficult to understand; there are many supermarkets between us and the statutory market. Construction has just started on a new ASDA 300m from them, and 2 miles away they have a Tesco superstore open 144 hours a week.

In its current form, this thousand-year-old common law seems to have little relevance to the modern world, and is a direct impediment to us trying to support a local sustainable food system.