« The Intergalactic Health and Safety Inspectorate 4
A Tool for Transition: the Sustainable Communities Act »

A second review of ‘Localisation and Resilience’ 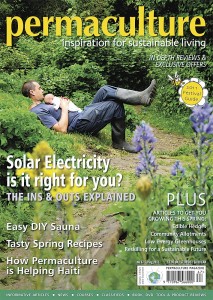 Here’s another review of ‘Localisation and Resilience’, this time from the latest edition of Permaculture Magazine:

It’s nearly three years since I received a copy of The Transition Handbook and was inspired to become involved in the movement. Much has happened since then both in terms of the way Transition has developed and in the wider world of global economics and environmental concerns. So it was with great interest that I read Rob Hopkins’ PhD thesis (progenitor of the Transition model).  If his Transition Handbook sowed the seeds of the Transition concept then this thesis examines some of the green shoots that have arisen and effectively asks the question, ‘Will they grow and blossom into a meaningful crop?’

It is, of course, primarily an academic work designed for an academic purpose but it is, nonetheless, a very valuable addition to the cadre of literature con-cerned with how we can best adapt to the challenges we face concerning living more sustainably. It is written in Rob’s clear and highly readable style and it pulls together the recent and relevant literature and political developments, of which there have been a great many. In particular it raises the intriguing potential connection with the coalition government’s rather unclear notions of the Big Society and ‘localism’.

Totnes is used as a case study to see what has been achieved. The nature of the town, its socio-economic make-up, history and location all conspire to give transition a head start as many residents are predisposed to the ideas and are willing to help. There has been lots of activity and considerable success, but the question is, can it be replicated in other places, such as urban areas, communities with significant disadvantage etc.? And even in Totnes there has been limited success in engaging those under 30.

As an active ‘transitioner’ I recognised much of the findings from my own experience. In particular I found myself nodding at some of the comments about the existence of what sociologists describe as the ‘value-action gap’. This being the seemingly ubiquitous phenomenon whereby people have aspirations (in this case about adopting broadly green lifestyle principles) but these are often not translated into practical action. Many activists within transition circles spend a great deal of time considering how such a gap can be minimised.
The thesis looks at the ‘what now?’ question for Transition. It sees a focus on ‘resilience’ as being better than climate change/peak oil for wider engagement. This too is an approach that New Forest Transition has found to be effective, especially in engaging local politicians who eye Transitioners with some suspicion.

The need to ‘scale up’ action through a growth in social enterprise and local governance approaches is seen as a way forward with a potential alliance with current political policies (Big Society/Localism) is important. Because it is an articulate and thorough review of the topic, I believe this thesis can serve to inform policy development both at regional and national levels. I would urge policy makers to read it.