« How can we grow more food locally? Pam Warhurst of Incredible Edible Todmorden speaks in Bath
A short film of the launch of OVESCO’s share launch »

A trip to London the day before a Royal Wedding 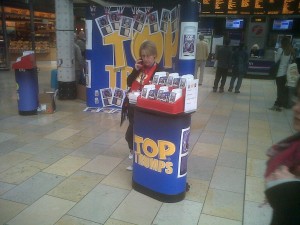 I spent the day yesterday in London.  I arrived thinking it was going to be packed with people, but actually it was remarkable how few people there were.  I’ve never seen Paddington station so empty.  The London underground was positively spacious.  Where was everybody?  I did see one plastic Union Jack hat, but that was about it.  Anyway, here’s a rather entertaining story from the day….  I met Peter Lipman (Chair of Transition Network) and we headed over to Ladbroke Grove for a meeting we were having there.  We had about 20 minutes before the meeting, so went round the corner from the meeting venue and sat on a wall to catch up about this and that.

Earlier that morning I had seen Tweets about the ludicrous police raid on the Transition Heathrow project, as well as on another 4 squats in London, ostensibly on various pretexts, but almost certainly a ‘just behave yourselves’ operation in advance of the Royal Wedding.  With this sense of police-centred edginess we noted, as we sat on the wall, that in the road we were overlooking were 2 riot vans, and about 6 police cars, with more police cars arriving every few minutes.  The conversation moved to whether we were sat next to an impending raid of some kind, or something to do with the policing of the wedding.  Some kind of crack team preparing a rapid response should anything untoward happen at the wedding perhaps?

As we were having this conversation, two policemen walked by.  “Excuse me”, called Peter.  They came over.  “We were just wondering”, he asked, “why there are so many police cars here?”  The two officers looked at each other, and then at us in bemusement.  “Because this is a police station” he said, pointing to the building we were leaning against.  Ah.   That’ll be it then.

I don’t intend to give much time to today’s nuptials, but having told my police station story, I do feel duty bound to also share with you this splendid Royal Wedding pizza I saw advertised in the Evening Standard yesterday.

On this day of celebration, please do share a compassionate and sympathetic thought for whichever poor soul’s job it was over the last few weeks to recreate, hundreds and hundreds of times, detailed portraits of the happy couple in olives, pepperoni, mozzarella, peppers, and mushroom.  I’m sure they were looking forward to the arrival of today far more keenly than any of the rest of us…

Great story Rob,I was getting all excited about the impending raid on transition meeting!
Bless you all!
Will

Even stranger – they are all still there Rob. . .