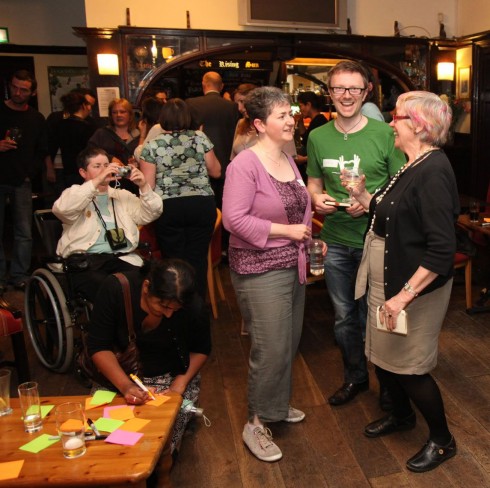 Here is a guest blog from Alexis Rowell in London on recent developments in northwest London.

Two new Transition Initiatives started up on a wave of enthusiasm and energy this month in northwest London – Transition West Hampstead and Transition Willesden (see pic above).   Fifty people, including all three local councillors, attended a screening of that Transition favourite “A Farm for the Future” in a West Hampstead church in the London borough of Camden. They then listened to speakers from neighbouring Transition Initiatives Belsize and Kensal to Kilburn and broke out into Energy, Food, Transport and Wellbeing sessions. The evening ended with nettle pesto and lashings of elderflower cordial (provided by Transition Kensal to Kilburn), and the setting of a date for a first Initiating Group meeting.

One of the speakers, Alexis Rowell of Transition Belsize, said: “It was a hugely inspiring evening. There was so much goodwill in the room. People really wanted to get on with building a better future for the local area. I left feeling hugely optimistic about Transition West Hampstead.”

The following night more than 30 people, including a local councillor, attended the launch meeting of Transition Willesden in the Rising Sun pub in the neighbouring borough of Brent. During the course of the evening the group came up with exciting ideas to help make local life more sustainable and community-minded. Suggestions ranged from the imaginative (using a roving goat-herd to cut long grass rather than lawnmowers – the goats’ droppings also fertilise the soil) to the social and practical (food-growing, green book clubs, gardening and craft workshops). Working with local schools and involving them in food-growing projects was high on the new group’s agenda, as was ‘greening’ the forecourt of the local Sainsbury’s in Willesden, involving community members.

Viv Stein, one of the founders of the Transition Willesden group said: “I was inspired and overwhelmed by the enthusiasm and ideas generated by local residents in the Willesden area who are ready, willing and able to get involved with some really exciting green projects.  We had people from all over Willesden, Dollis Hill, Cricklewood and even Kingsbury come along. Transition is all about local communities coming together to find their own solutions to the very real problems of rising food and fuel prices, and preparing us for the end of the oil age.”

Cllr Ann Hunter, Liberal Democrat Councillor for Willesden Green ward, said: “This was such an exciting meeting, to see so many new faces and hear so many innovative ideas, from fruit tree planting and picking to gardening projects, from food projects to cycle maintenance. I couldn’t believe I was still in the pub at 11 o’clock, but the energy was fantastic. A really joyful beginning to the whole project! Watch this space. Willesden will be greener!”

I also keep the “London in Transition” links in the sidebar on http://transitionnewcross.org up to date 🙂