« Transition: Thrive – our new Sustaining Momentum course has its first outing
A Story of Transition in 10 Objects: Number 9. A small bowl of topsoil »

How Transition initiatives shone in the Energyshare vote: a podcast 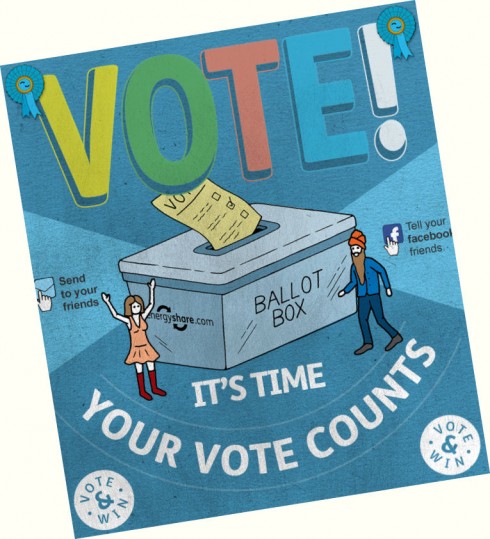 Last Saturday was the final day of the River Cottage/British Gas Energyshare vote, an innovative approach to raising awareness for, and supporting, community renewables.  When voting closed, at 5pm, the winners were, in the large category, Hexham River Hydro, in the medium category, the Portobello and Leith community wind energy project, and in the small category, the North Devon Hospice and the Shrewsbury Hydro.  Three of the four are Transition initiatives.  There were also Transition groups who didn’t win, and also quite a few who didn’t make it through to the final vote (the many fantastic projects in the vote gave a sense of the huge hunger out there for community renewables).  I talked to each of the 3 Transition winners, Portobello (here‘s a piece from their local paper), Shrewsbury and Tynedale about the Energyshare process, how they rustled up enough votes, how the last hours before the vote closed were spent, and how being winners makes a difference to their project.  This short podcast captures their stories:

And here is the moment where Portobello and Hexham found out they had won: