« Discussing motivational insights for Transition with Stephen Rollnick and Chris Johnstone (in 2006)
Five questions for Rebecca Mayes, composer of the music for ‘In Transition 2.0’ »

Five questions for Beccy Strong, who filmed much of ‘In Transition 2.0′ 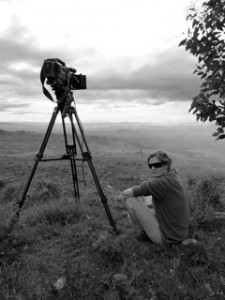 Two days to go until the previews of ‘In Transition 2.0‘!  In our second ‘In Transition 2.0’ podcast, I spoke to Beccy Strong (see right filming in Rwanda), who filmed most of the UK-based sequences in the film, and asked her 5 quick questions.  You will also hear, interspersed in this short podcast, some clips from the film itself.  In our next podcast, we’ll be hearing from Rebecca Mayes, who composed all of the music used in the film.