« New video: ‘A Little Patch of Ground’
10 things I loved about being at ‘Change Nation’ » 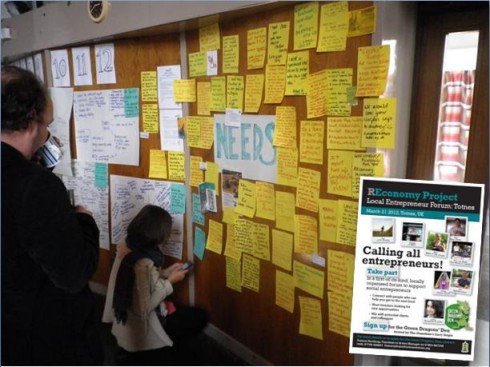 The shift towards seeing Transition in terms of the rebuilding of local, resilient economies continues apace.  One of the key evolutions in this, a step change in thinking about what Transition looks like in practice, took place in Totnes yesterday.  Called the ‘Local Entrepreneur Forum’, it was introduced in the promotional material thus:

“There’s never been a greater need to rethink our economy, especially at the local level.  Social and sustainable enterprise represents the future, and here in Totnes, we’re not just waiting for the future to happen.  We’re inventing it”.

The idea was to bring entrepreneurs, investors and experts together, inspire them with possibilities, mix them up and see what happens.  It was to prove a heady brew. 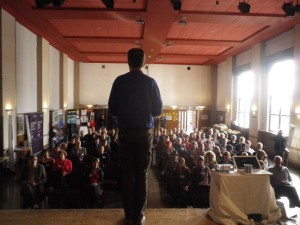 After I did a short welcome, Jonathan Dawson, Head of Economics at Schumacher College (see right), set the scene in terms of the many new models for new ways of doing community-led businesses that are emerging around the world, from CSAs to car clubs, from community-supported bakeries to local currencies.  Then Jason Mollring, Head of Connect at UnLtd Connect spoke about why new business models matter and how UnLtd and others are supporting their emergence.

Fiona Ward, REconomy Project Manager, then talked about what REconomy is, and how it is designed to support social enterprises emerging in Transition.  Reconomy, she said, is about new enterprises that are about more than just profit, about respecting resource limits, about appropriate localisation, which serve the community and which build resilience.  They should also be big enough to provide the jobs and goods we need.

Finally, Frances Northrop, Transition in Action manager for TTT, talked about how this was all starting to look in Totnes.  She began with a slide showing a thundering cavalry, with the caption “there is no cavalry”.  No-one is going to come riding to the rescue of Totnes, we need to sort this out for ourselves.  She then went through the range of things underway in the town, the Economic Blueprint, the Atmos Project, and the other opportunities for taking control of our economic destiny. 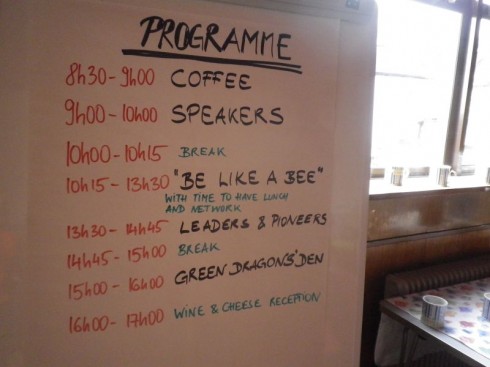 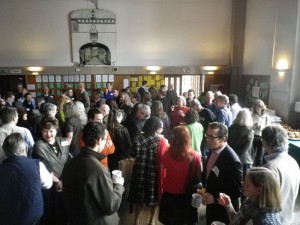 The mapping activity that preceded the 'Be Like a Bee' session

Then we were into the first activity of the day, a mapping activity.  Firstly people were asked to imagine that Totnes was the centre of the universe, and for people to arrange where they had come from to the north, east, south and west of there.  Secondly, people were asked to map themselves along a continuum of “I feel confident that I can start a business and I’m ready to go” to “it’s not really on my radar at all at the moment”.  Soundings were then taken at different points along the line.

This was followed by an exercise called “Be Like a Bee”.  At the back of the hall was a “Needs” wall, an “Offers” wall and a “Marriages” wall (where any deals struck during the day could be recorded).  The ‘Be Like a Bee’ section was rather like Open Space, people arranging themselves around the room in discussion groups, discussing whatever they were passionate about.  Two rounds of this took place, with a go-round of any particularly useful insights that people wanted to share. 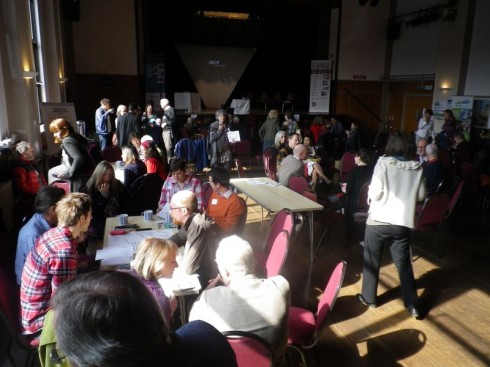 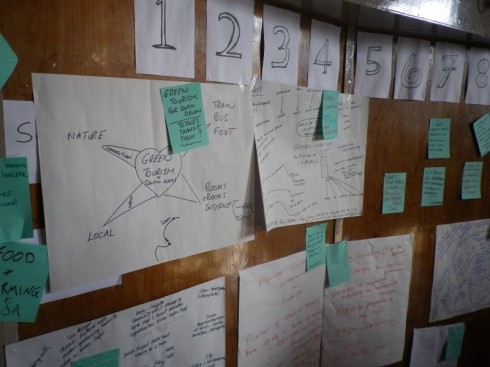 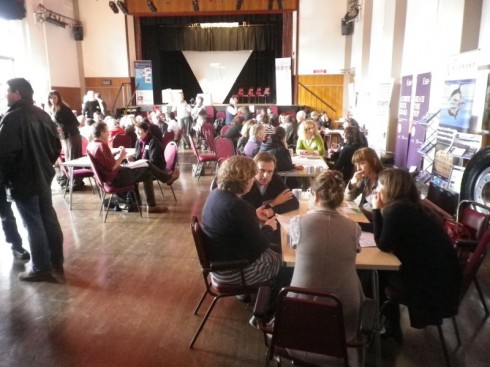 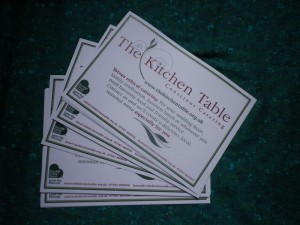 After lunch, a rather fine locally sourced meal produced by Transition-related social enterprise ‘The Kitchen Table’ (“conscious catering” – see right), was a session called “Leaders and Pioneers”, where people from established businesses shared their stories and their tips for success.  We heard from very successful local companies that remould tyres and produce complex engineering for marine navigation, as well as from a local food project, Paignton Zoo who are completely rethinking the role of a zoo in the light of peak oil and climate change (really!), and one more that escapes me right now (it has been a long day). 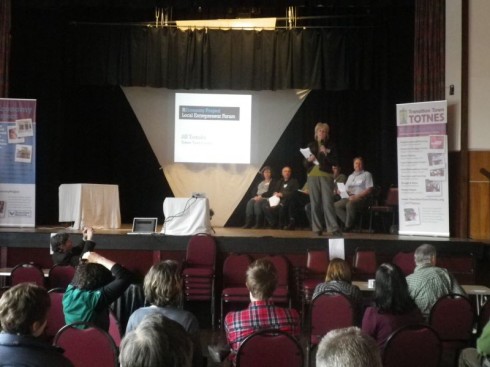 Then after a short break, we were into the final session, the Green Dragons’ Den.  Unfortunately, The One Show’s Lucy Siegle had had to cancel at short notice, but TTT’s Hal Gilmore stepped in and did an admirable job.  Like the TV Dragons’ Den, the Dragons were able to offer support and advice and offers of help, but unlike the TV version they did not have piles of cash at their disposal.  They brought expertise and insights from Buzz Bank, from the Funders Network and from the local Sharpham Trust. 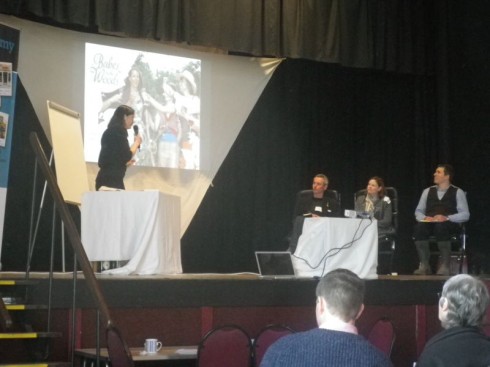 Hetti from 'Babes in the Wood' pitches to the Dragons.

Anyway, five businesses braved the stage to pitch their ideas to the Dragons.  They were: 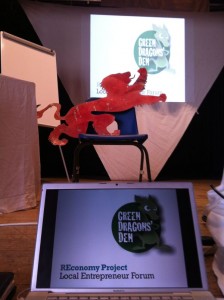 All went down well with the Dragons who offered useful advice and support, and afterwards quite a few of those pitching to the Dragons were approached by members of the audience who wanted to invest in their businesses.  The day was rounded up by Frances Northrop who thanked everyone who had made the day happen and everyone who had come and made it such an inspiring day.

What touched me was that the event was so hopeful, so practical, it was an event with its sleeves rolled up.  It was a model that could easily be replicated in other places and, indeed, there were people there from other communities looking at how they might do something similar where they live.  There was a shared sense that the future starts here, and it starts with us.

People with skills, expertise, experience and money they wanted to share were happy to do so.  People with ideas for businesses that were in service to the wider concept of Transition and the building of local economies found themselves in a space rich with inspiration, support and encouragement.  Perhaps most powerfully it offered a context, a story within which their ideas became more than the sum of their parts, part of a pulsing, vital whole, a story whose time has come.

It was a taste for me of what it might look like when Transition gets beyond having to justify itself, to argue the need for it to exist in the context of peak oil, climate change and economic contraction, and instead finds itself valued as the place where the clear thinking and the passion about where a new economy is going to come from.  When it is a given because it works and people can see it working.  When supermarkets are seen as job displacement rather than job creation, when local food businesses are where the job creation and retraining is coming from, where a range of enterprises have emerged to produce local building materials for housing projects, and where investment mainly goes inwards towards communities rather than outwards to banks.  When Transition has grown up, and Transition is everywhere.  It’s early days, but I really think it might just be possible.

Inspirational day – well done to all.

The Green Dragon’s Den was particularly inspiring. What an awesome bunch of not just great ideas, but most of them actual trading businesses up and running, and wanting ideas to take them to the next level. I had no idea most of them existed, even though they are right here under may nose! What else inspiring must be happening elsewhere I am thinking? Ok, we have a long way to go , but this for me was living proof that the green economy is happening and viable.

This certainly felt like a bench mark moment for Transition to me, certainly here in Totnes. (I have been involved in Totnes since 2008 and am involved in the TN as a trainer in the UK Training pool).

Re the ‘Leaders and Pioneers’ section, it was hosted by Jill Tomalin of the Totnes Town Council who described this work as ‘crucially important’. It included:
Richard O’Connell of Bandvulc tyres
Stirling Paatz of Barr and Paatz
Kevin Fredidani, Curator of Plant at Paignton Zoo
Lucy Wood of Buckland Food Growers
David from Bridgetown Stores.

thanks to all.
it was marvellous – and still feels that way today!

Ah yes Bridgetown Stores! That was the one… fantastic stuff… thanks Hal…

One of the most positive things I’ve been to in ages…not least because of the absence of stuffed shirts and doubters. Really inspiring…the future looks in pretty good hands if we can all hold that trajectory.

Massive well done to everyone who pulled it together, thanks

i think we (transitioners and the Transition Network) should be throwing everything we have at this REconomy-type work. It has explosive potential in terms of new audiences, diversity, reaching critical mass in our communities etc. Naresh mentioned finding things that were under his nose, Jay mentioned in his video (see other tc post) that it brought in completely new audiences and that’s in Totnes where you’d feel that no stone had been left unturned.

I could write for hours about why i think this is where it’s at but one thing is fundamental and that is if all our voluntary community activities are funded by jobs that are dependant upon an unsustainable economy then the transition only truly begins in earnest when we start to make headway in transitioning that economy.

Bring on the next phase in the Transition tale!!

What a tremendous day and well done to Totnes for creating it. Having had a quick taster from Graham Truscott of what the REconomy Project is all about and now reading Rob’s account, this is certainly something we need to get into the local Chamber and the local councils.
The structure is certainly duplicatable and could be put on anywhere, all we need are some people to present to e Green Dragon Den.
Excellent and very well done.