« ‘Can Totnes build itself?’: a new paper from Atmos Totnes
New video: ‘Regeneration for real’ »

The Four Slugs of the Apocalypse 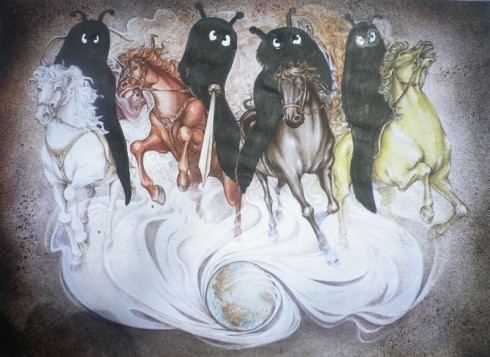 The other day my wife sent me a text while I was at work.  “Get some broccoli”.  During my lunch break, I duly headed out into Totnes in pursuit of the afore-mentioned brassica.  I started out by visiting all the places that might sell local, organic broccoli, but they were all out, one telling me “it’s like gold dust mate, you’d be lucky”.  I then tried the places that would stock non-organic, non-local broccoli, but they were out too.  All of a sudden it transpired that I lived in a broccoli desert.  Turns out it’s not just Totnes, the crappest summer the UK has ever faced has hit UK farming hard.  It has also led me, I must confess, for the first time, to abandon my garden to an unprecedentedly vast slug population.

I have grown vegetables every year for at least the last 14 years, apart from the odd interruption.  I have never known a year for slugs like 2012.  They have destroyed my garden in a way I have never previously witnessed.  It has felt like the gelatinous Mongol hordes of Genghis Khan have not just swept through my garden, levelling everything in their wake, but they have also set up camp there, declared an Independent Free State requiring me now to pass through check points on my way to the compost heap.  I went out to de-slug the night Spain won Euro 2012 and the slugs in my garden were strangely reminiscent of the scenes you see on TV where the fans of the winning team party in the streets, drive around beeping their horns with flags flying. 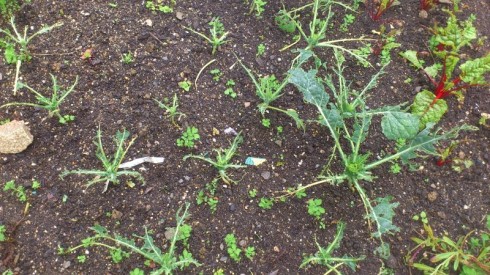 What remains of my cabbages…

My dwarf beans?  Reduced to sticks in days.  Lettuce?  Forget it.  Runner beans?  Came up strong and vigorous and within 2 days were reduced to stumps.  Cabbages and chard looked as though someone had run amok among them with a machine gun.  Peas?  Trashed.  As a gardener I am used to some level of damage to those crops, but potatoes?  My spuds have been reduced to sticks, all the leaves long gone.  Potato blight?  Ha! I’d be so lucky as to have any leaves for the blight to get stuck into.

One especially damp evening I passed them and was horror-struck to see what remained of my potato crop covered in slugs, inhabiting them like some kind of creepy tree-top village, or like the world’s worst Christmas tree, decorated with slugs.  Huge bloody things.  Slugs that hiss at you when you wrestle them off what remains of your produce.   The pace at which they then try to get out of the bucket I put them in whilst collecting their comrades makes a mockery of the word ‘sluggish’.

I told a friend of mine about this, and how when I go into the garden, it feels as though if the slugs had arms and fingers (and thank heavens they don’t) they would all be sticking two fingers up at me as I walked past.  “Well what do you think the two horns coming out of the top of their heads are then?”  she said.  Fair point.  That image will stick with me now, the idea that slugs have a permanent but retractable two-fingered gesture on top of their heads . 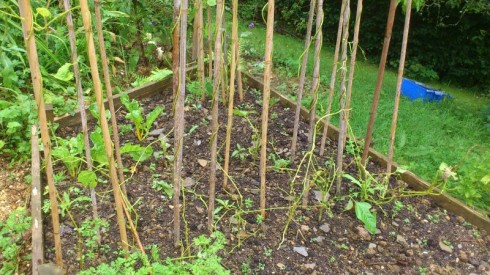 My climbing French beans: slugs have been known to climb to the tops of the canes to pick off the leaves all the way up the plants.

I’m not proud to admit it, dear Transition Culture readers, but this year in my garden has been a washout.  I’ve given up.  The slugs have won.  Well, the slugs and the almost complete absence of any sunshine.  While parts of North America are the driest they’ve ever been, here we are hogging all their water.  Last Sunday we woke up to sunshine for the first time since early May, and my garden visibly steamed.  The slugs retreated, like in Dracula films where the vampire hunter holds the crucifix up and Dracula recoils and shrinks, hissing, into the darkness.  Only lasted a day though.  Now we’re back into the kind of weather more suited to a North Sea oil rig than the ‘English Riviera’ and the slugs are back, patrolling their patch, forming sub-committees and penning an ambitious 5 Year Plan, complete with a competition to decide street names.

This blooming of the slug population is not just restricted to my garden, it is a national epidemic.  There have even been reports on the BBC of car crashes being caused by slugs.  What happens you see (if you are eating, you might want to finish doing so until you continue) is that when one slug is squished, more appear to devour their fallen comrade (no-one can accuse slugs of being sentimental), who are then run over, so more appear to eat them, and so on and so on, until a slimy mat is created sufficient to cause a car to skid and lose control.  I kid you not.  Drive carefully people, very carefully.

It has been estimated (on the BBC again) that about £8 million’s worth of vegetables have been destroyed by slugs this summer and they are even starting to damage wheat crops.  There have also been reports that slugs can be fatal to dogs, if ingested.  We are also, apparently, also suffering from the fact that out native slugs have now been joined by a Spanish ‘super slug’, leading to even more damage, and a new ‘ghost slug’ has been discovered in South Wales that attacks and eats earthworms.  Not good.

If those people working on genetically modified crops while also claiming to be working for the benefit of mankind actually want to do something useful, perhaps they might engineer a kind of grass that you could grown in your lawn that would be more attractive to slugs than the things you actually want to eat?  Or engineer a slug that prefers the boring stuff that you don’t actually want to eat (like brambles, Woundwort or bindweed) to the stuff you want?  Just a thought.

There is a serious side to this though.  Of course the climate denying folks have loved this summer as an opportunity to say “global warming? Hah!  Is that what you call it?!”, in the same way as the Tory MP last winter who Tweeted something like “just out scraping global warming off my windscreen”.  However, the link between the extreme weather we have been seeing around the world has been well documented, and it seems to me that in designing for resilience in terms of food, it is about planning for summers like this one (incessant rain, low sunlight, slugs the size of puppies, floods and an all-pervading dampness) as well as last one (very dry, threats of hosepipe bans, failed crops due to lack of rain).

Last year I talked to Martin Crawford of the Agroforestry Research Trust about how farming might prepare itself for increasing dryness, especially in the south-east of England, the ‘grain belt’ of the UK.  His solution was an increasing use of perennial plants, more ground-cover, more diversity, more permanent plantings.  I haven’t asked him yet for his thoughts on how to make food production more resilient to the kind of damp squib climate we’ve had this year, but I imagine his response would be much the same.

For people who read Transition, or localisation, as meaning self-sufficiency, this year has been a good example of why that’s not just a great idea.  Some imports have always happened, and were we an entirely localised food economy, we’d be seeing real food hardships at this stage.  At the same time though, the problem that is driving the prime cause, i.e. climate change, is, in part, being generated by what is our current alternative, the globalised food system, that flies broccoli into the supermarkets of Totnes to keep us happy.  This summer has been as good an advert against monoculture and over-reliance on annual plants as I have ever seen.

As for me, I’m planning for next year to put about a third of my veg garden over to perennials, aided by Martin’s excellent new book ‘Perennial vegetables’.  Whatever the weather does (barring huge hailstones) I will run a better chance of having something worthwhile to eat.  By the way, in case you’re wondering, I have had some produce this year.  My broad beans have done very well, and my various squashes managed to get away and started for flower, although the slugs will probably eat those too.  My greenhouse is doing OK, although the slugs have also worked their way into there, but to nowhere like the same degree.

In 1999, scientists claimed they were on the verge of inventing a machine that wandered around the garden, collecting slugs which it then digested in order to power the machine’s onward search for more slugs.  13 years later, sadly, it has yet to see the light of day.  So, please feel free to treat this post as an opportunity for a group moan about slugs, something it’s good to do on occasion, especially during a summer like this one.  Thanks for listening.  I appreciate it.

I’ve nominated you for the One Lovely Blog Award
http://solarbeez.com/2012/12/16/one-lovely-blog-award/